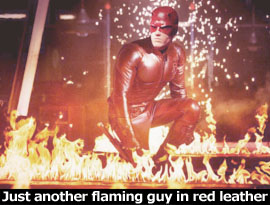 by Walter Chaw There's a real grittiness to Mark Steven Johnson's Daredevil--most of it attributable to Frank Miller's "Daredevil: Born Again" comic-book series (penned just prior to the author's seminal "The Dark Knight Returns"), from which the film borrows tone, religious iconography, and a certain washed-out colour scheme as reflected in Ericson Core's moody cinematography (which is closer to his work on Payback than on The Fast and the Furious). The problem is that the film's tenor and Catholic fetishism are moored to the light redemption of the titular hero, the bizarre stigmata and martyrdom of one villain (and forced genuflection of another), and perhaps the suggested rebirth of a femme fatale. Daredevil, then, is interesting for its borrowed elements, but it doesn't have any real weight to justify the treatment.

Matt Murdock (Ben Affleck) is blinded as a child after witnessing his dad (David Keith) playing the enforcer for a local On the Waterfront Johnny Friendly--the double-tragedy (one moral, one physical) transforms the kid into a crusader for justice with a killer sense of hearing and touch subbing for his allegorical disability. Training himself Batman-style in the deadly arts and donning, also Batman-style, a rubber suit, "Daredevil" (possibly named, as many characters will reiterate, for the fact that he has no fear...or something) prowls the dark streets of New York, meting out blind justice in particularly brutal vigilante style.

Love interest with a dark Freudian past Elektra (Jennifer Garner) contributes to one of the most exuberantly puerile meet-cutes in movie history (imagine the workshop as, "Hey, wouldn't it be cool if Daredevil met this girl and then they have this kick-ass fight in a park and then she castrates him by kicking his stick out of his hand, and then they fall in love?"), lovable sidekick Foggy (Jon Favreau) gets a few middlebrow one-liners, arch-henchman Bullseye (Colin Farrell) gets to act loony, arch-villain Kingpin (Michael Clarke Duncan) gets blissfully little opportunity to butcher lines, and girl Friday Karen Page (Ellen Pompeo, wasted) gets next to no screentime.

Without anything resembling a linear plot, Daredevil seems mainly involved in Murdock figuring out whether or not he's a good guy while wooing Elektra and jumping around the city at night with the obligatory investigative reporter (Joe Pantoliano, strangely subdued) on his trail. Small details impress: the fact that the hypersensitive Murdock sleeps in a sensory depravation tank, the revelation of a roadmap of scars (and perhaps an attendant addiction to Percocet), and a nice sonar/rain effect; but, inescapably, Daredevil feels like a prologue for a real picture and an in-reference laden love-letter to fanboys. Not only is a conversance with the comic a wise prerequisite, but it also appears for all the world that every character in the film has read the comic based on their lives. (Daredevil knows Bullseye's name without having heard it, Kingpin knows the identity of Daredevil's father for some reason, and everyone knows that the infernal hero's tagline is "The Man Without Fear.")

The picture is never anything but disjointed and, worse, burdened by long stretches of stultifying exposition. Affleck is flat and Garner essentially reprises her mysterious woman of action role from TV's "Alias". With the meatiest opportunity to overact, Farrell obliges as the feral Bullseye, who employs a mad array of projectiles (smoked peanuts, paperclips, stained glass shards) before finding himself stricken with the wounds of Christ before a hero who has, earlier in the film, been equated with the Virgin Mother. Graeme Revell's horrendous score makes much of director Johnson's transplant of Frank Miller's Catholic bent, though beyond the suggestion that Daredevil is some sort of Biblical "eye for an eye" (so to speak) crusader, the hysterical hurly-burly points only to a mistaking of typical comic book opera for archetype.

Taking place in a curiously small NYC where everyone seems to know where everyone else is going to be at any given moment, Daredevil is a surprisingly dark film, a grotesque menagerie of sociopathic freakshows stalking seedy nightclubs, shadows (literal and metaphorical), and the baptismal fonts of asphalt puddles and sudden rainstorms. There's no sense of fun to the proceedings between Affleck's monotone and Farrell's heavy breathing, leaving a product that is essentially a juvenile fantasy of bully comeuppance, adolescent righteousness, untapped potential (the male Cinderella equivalent involving radioactive spiders and biological waste), and interested women as buxom as they are safely de-feminized. Bloody and violent, it earns points for attempting to bring Miller's urban dystopia to the big screen and recognizing the author's contribution to the maturing of the comic medium in the early '80s (while losing points for sticking Kevin Smith in the mix in a smug cameo), yet washes out in the end as another "serious" comic-book flick (Road to Perdition, From Hell) that's fitfully interesting but exhausting and, finally, empty. Originally published: February 14, 2003.