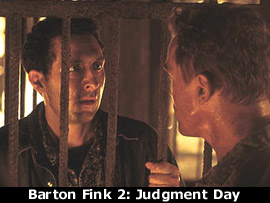 by Walter Chaw There is an inexplicable instinct in Hollywood to cast Arnold Schwarzenegger as an everyman when the Austrian Oak has only ever played a pre-Christian barbarian and post-apocalyptic robot convincingly. Perhaps sensing something awry in Arnold playing a mild-mannered Irish fireman named Gordon Brewer, the creators of Collateral Damage have made an effort to portray Schwarzenegger's character as a comic book superhero--maybe one named "Fire Man." Brewer irrationally favours the tools of his life-saving trade (a pair of axes and a serendipitously placed sliding pole) over the far more plentiful (and practical) guns, while a cleverly donned white Panama Hat (making Arnie look a little like Leon Redbone crossed with a bratwurst) somehow successfully disguises the 6'2" goliath from seeking eyes. A pulp caped crusader comic would at least have the decency to be lurid and exciting, though--all Collateral Damage manages to be is shatteringly dull.

Los Angelese fireman Gordie (Schwarzenegger) is late to pick up his wife and moppet one day and arrives just in time to watch them be incinerated by a terrorist bomb at the Colombian consulate. As the previews joyfully reveal, Gordie has seen the madman's face. What's not mentioned is that the terrorist, Claudio "The Wolf" Perrini (Cliff Curtis), is dressed just like the liquid terminator from Schwarzenegger's last good movie, Terminator 2. I suspect this costuming decision (and the revelation that he's used a "liquid explosive") is a desperate attempt to get an already distracted audience to mnemonically associate this dreck with a bona fide action spectacle. After a painful moment where Schwarzenegger intones a few lines of Shakespeare ("Bubbo bubbo, toy and trubbo") to provide the film's sole comic moment (save for a scene in which he Mike Tyson's a baddie's ear), heroic Gordie somehow finds himself in the middle of a Colombian jungle making his way to The Wolf's hideout. Things blow up (but not enough of them), people get killed (but not soon enough), and John Leguizamo gets a bullet in the chest in the five redeeming seconds of the entire benighted exercise.

Brewer intones at one point that he intends to kill only The Wolf--an interesting sentiment but for the troubling fact that at that point in the film Brewer has already killed dozens of people. It is a moment of revisionism that seeks to obscure Brewer's Death Wish vendetta, disturbing not for its dishonourable implications so much as the egregious disrespect shown its audience. The most troubling aspect of Collateral Damage, however, is that after getting mileage from being the highest profile film delayed by the terrorist attacks of 9/11, it now appears to be using the tragedy as a selling point. The press notes include such chilling statements from producer Steven Reuther as, "Since September 11th Collateral Damage has become a term that we've all had to digest. The journey that Gordon Brewer takes in this film has become more understandable for everyone." It's one thing to push back a film's release date in respect for a national tragedy, it's another altogether to subsequently try to capitalize on that same tragedy to draw a vengeful population.

Collateral Damage plays exactly like a cheap direct-to-video knock-off, with enough similarities to Gymkata and Howie Long's Firestorm that my fingernails instinctively crawled towards my long-suffering eyeballs. It occurs to me that they should pass out safety goggles at movies like this--and maybe a clothespin for the ol' schnozz. There are so many things wrong with and abhorrent about Collateral Damage that it's easier just to warn you away from it. Let me reiterate that the film, in addition to its myriad offences, is yawn-inducing. Nothing happens for long, long stretches, and when there is an action scene, it's too clear that director Andrew Davis is trying to salvage his sinking ship by plundering scenes entire from previous successes The Fugitive and Under Siege. Consequently, the shoot 'em up numbers are only barely connected to the narrative, the aggregate effect being one of a listless, fragmented morass oddly castrated by Schwarzenegger's newfound shyness towards firearms. Even for someone who gets a good deal of guilty yuks out of watching Arnie lope around and twist his tongue to speak multi-syllabic words, even for someone who considers Predator one of the most underrated films of the 1980s, Collateral Damage is unbearably torpid and asinine. Originally published: February 8, 2002.