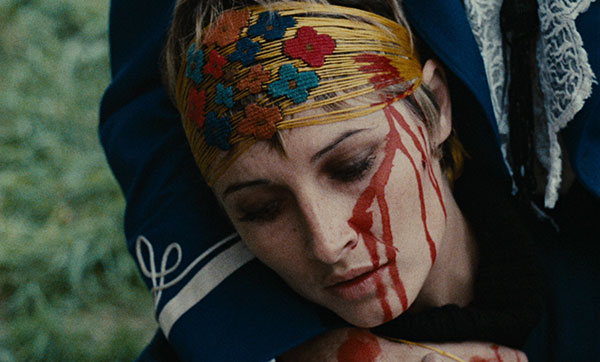 by Angelo Muredda "The horror of the bourgeois can only be overcome with more horror." So says a militant cannibal as he stands over the remains of one such bourgeois husk late in Weekend, Jean-Luc Godard's farewell to the alienated pop art and American genre gerrymandering of his early period. As the line about horrors piled upon horrors implies, Weekend is nasty, as valedictory addresses go--a scorched-earth attack on France under Charles de Gaulle that finds nearly all of its citizens massacred in car crashes of their own design and converted into consumable products, namely food. The humanism of minor tragedies like Vivre sa vie and the heedless joy of Frank Tashlin homages like Une femme est une femme has here curdled into a new, ugly form. Although its title suggests a world of leisure and free play, one doesn't enjoy Weekend so much as one endures it.

After a parking-lot tussle and an analysis session in the dark that recalls the threesome story in Persona extended beyond the limits of watchability, our bourgeois badniks Corinne (Mireille Darc) and Roland (Jean Yanne) take to the road, off to her provincial home in Oinville to collect on Corinne's inheritance, whether her father has to die by natural or man-made consequences. The trip is an ironic picaresque, Huck Finn's river journey inverted so that the slavers and hustlers are the heroes rather than mean diversions to be dwelled on momentarily, then left behind. There's no discarding Corinne and Roland, our seemingly civilized initiators into an increasingly barbaric world that appears to dovetail with the green locales in which the couple increasingly finds itself. Consider the episode where they come upon the community-theatre equivalents of Tom Thumb and Emily Brontë in the woods. When they can't squeeze directions out of Brontë, who can only reply in cryptic, utterly functionless poetic truisms, their instinct is to douse her in gasoline and light the match. "Can't you see they're only imaginary characters?" Roland offers when Corinne shows a trace of remorse. "Why does she cry, then?" Corrine asks.

Though Godard's earlier characters often had a dash of this sociopathy about them, Weekend sees Godard abandoning character in the traditional sense altogether, trading in the distinctive hangdog mugs of actors of Jean-Paul Belmondo, for example, for the cultivated blankness of Darc and Yanne, the physical embodiments of bourgeois consumption and a pair of figurative cannibals more frightening than the actual cannibals they meet later on. The actors do the best they can with these middle-class androids, ably handling the slapstick routines designed for them without suggesting there's anything going on behind their dead eyes. Like Beckett's Didi and Gogo if their thoughts turned to homicide instead of suicide, they're just another part of the landscape, clowning around in the void that Godard coolly surveys through a mix of disembodied crane shots and a 300-yard dolly tracking shot that follows their car's progress alongside a traffic jam that inexplicably has only held up one lane. The country itself is a corrupt pastoral, depicted at one point as an enormous car park where twisted metal sprouts up from the tall grass like weeds.

Notwithstanding its unalloyed contempt for logos and designer brands ("My Hermes handbag!" Corinne wails from the wreckage of a crash as an organ shudders to life on the soundtrack--fussing over her prized accessory before she's even checked to see if Roland has survived), Weekend is perhaps most impressive now as a work of pure messaging, a revolutionary pamphlet smuggled into a movie. No filmmaker has ever signalled his next mutation so conspicuously as Godard, who prefigures his impending work with the Dziga Vertov Group, a Maoist film collective co-formed with Jean-Pierre Gorin, in a final swerve into Brechtian epic theatre. Anticipating the student revolts of May 1968, he stops the road trip cold for a frosty eight-minute conversation between a young African and a young Arab man--each speaking for the other in alternating medium close-ups--that is drawn from a pair of essays by Vladimir Lenin and Frantz Fanon, with Corinne and Roland (and the spectator) involuntarily held captive from their bored perch in a tree. Anticipating his own departure from commercial cinema, Godard uses the final title card (of many) to announce the end of not merely Weekend but the cinema itself as well. Like all true apocalypse narratives, Weekend is a tough sit: it's angry, self-righteous, and unsubtle, with little of the productive ambiguity of, say, Le mépris or Pierrot le fou. But it's exhausting in the right way, which is to say it holds nothing in reserve, firmly believing that the present world is on the verge of expiring anyway. 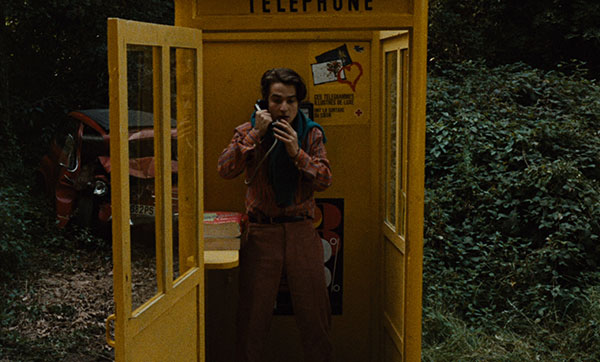 THE BLU-RAY DISC
Criterion presents Weekend in a sharply grainy 1.66:1, 1080p high-definition transfer sourced from the original camera negative. Despite its immaculately constructed colour scheme, Weekend is arguably one of the more muted of Godard's films from this period, and the image on this Blu-ray is a faithful representation of that--though the primary colours of the French flag, emblazoned in different permutations on cars, boots, and gored drivers, are appropriately saturated. At times, the image seems a bit washed-out, as with the sickly green pallor cast over the couple's excursion into a farmyard with a Mozart scholar yammering away at the centre, but presumably that's intended. The LPCM 1.0 mono track is similarly strong: Dialogue is crisp, and the car horns blare as loudly as you'd want them to during the interminable traffic set-piece.

For such a watershed moment in French cinema, the extras are on the thin side. The disc's MVP is surely critic Kent Jones, who supplies a characteristically erudite 25-minute video essay situating the film within Godard's political and artistic oeuvres, accounting in equal parts for his flirtation with Brechtian aesthetics and Marxist-Leninist politics, and (less successfully) defending his habit of having his characters and even his title cards speak through decontextualized quotations of other (unnamed) people's works. "He assumes the best of us," Jones muses, rather generously.

The remaining supplements come to us mostly in the form of three archival interviews, upconverted in all but one case to 1080i. The best of these is easily the excerpt from an onstage conversation with frequent Godard cinematographer Raoul Coutard (19 mins.), who walks us through the set-up of the infamous dolly shot and lets slip that Weekend's endless pileups likely have more to do with Godard's personal distaste for bad Sunday drivers than with a broader satire of middle-class entitlement. Darc and Yanne appear separately in a brief segment taken from a French TV broadcast (4 mins.), as does assistant director Claude Miller (25 mins.), who spends most of his time looking down at his lap, as if reading from notes. Neither piece is earth-shattering, although Miller gives a sense of Godard as a clear, organized captain, despite the chaos onscreen.

Rounding things out are a pair of trailers--one French, one American--along with a 9-minute, HD excerpt from a French TV documentary about Godard. This snippet features on-location footage shot by Philippe Garrel, over which speaks Jean-Michel Barjol, who is occasionally insightful but has a tendency to make useless pronouncements about how you should only watch La Chinoise if you've already seen Les carabiniers four times. Sounds good, whatever it means.

On the print side, Criterion offers a 40-page booklet featuring an essay by Gary Indiana, plus brief excerpts from Alain Bergala's Godard au travail as well as a 1969 interview with Godard conducted by Jonathan Cott. These supplements are a mixed bag. Indiana's essay is a good primer, nicely working through Weekend's move from the urban to the rural, among other things, but it's prone to self-enchanted soundbites about how the picture is "less like a novel than a pamphlet, and more like a fairy tale than either." No definitions of novels, pamphlets, or fairy tales follow that pronouncement, but it sounds nice. Bergala's selection breaks Weekend down into a series of motifs, some more interesting than others: His blurb on the film's fixation on monsters doesn't do much in the way of illumination except to show the quality of pseudo-scholarship on Godard. (More useful are his comments on Godard's tense working relationship with Darc.) The highlight of the package, though, is easily the Godard interview, first published in ROLLING STONE, where he talks about the belatedness of Weekend, given the state of French revolutionary politics that preceded it, and likens his earlier films' addiction to movies to a hippie's pot fixation, adding that now he's over "this marijuana movie magic thing."

Weekend closes the first part of TIFF Cinematheque's two-season retrospective, Godard Forever, spanning his work from 1954 to 1967. The retrospective runs until February 13 at TIFF Bell Lightbox.