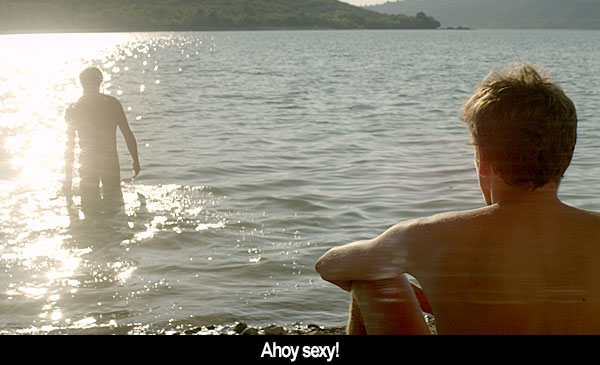 by Angelo Muredda Late in Alain Guiraudie's Stranger by the Lake, a detective sent to investigate the murder of a young man at a nude male beach designated as a gay cruising spot breaks from his procedural script to unload his exasperation on a potential suspect. "You guys have a strange way of loving each other sometimes," the investigator (Jérôme Chappatte) points out, when it seems that no one can provide him with so much as the first names of their recent conquests, much less recall the moment the handsome guy with the ballcap vanished without a trace, save for his abandoned beach towel. His assessment cuts two ways in a film that, before veering into the territory of gothic sex thrillers with uncommon ease, takes a wry anthropological approach to good sex and bad love in a space designed to indulge both in their most rarefied forms. On the one hand, the detective is an anticipatory mouthpiece for the conservative critics who would rain down on the movie he's in, eager perhaps to brand this tribe he's wandered into as perverse, borderline sociopathic death-seekers with no regard for their fellow neighbours. Yet his curiosity and suspension of judgment might also mark him as Guiraudie's ideal audience: a serene observer held in thrall to the strange lengths people will go to satisfy their desires.

Pierre Deladonchamps stars as Franck, a boyish blonde thirtysomething who arrives at the beach for the first time this summer and quickly strikes up a friendship with Henri (Patrick d'Assumçao), a divorced sad sack who spends his days pining by the water and admiring the scenery. The older and softer Henri's good for a friendly, soul-searching chat, but he's soon forgotten when Franck comes across Michel (Christophe Paou), a thick-moustached, vaguely Satanic Adonis who seems to be in the middle of a prolonged lover's quarrel with his own taciturn mate. Franck has the bad fortune to secretly witness the dramatic break-up later that night from his post-coital perch in the woods, where he sees his crush calmly drown his lover in the lake and walk off without a fuss.

A gentle soul with an even bigger appetite for heedless love than for casual sex, Franck only becomes more infatuated with Michel after catching him in the act (unbeknownst to Michel). Though it's the psychologically thick stuff of a Hitchcock thriller, Franck's odd decision to dig his heels further in rather than flee is an occasion for some surprisingly nimble physical comedy in a movie that scans at first as a deliberately flattened naturalist drama, a NATIONAL GEOGRAPHIC documentary about the mating habits of a certain strand of unattached gay man. Deladonchamps, whose work prior to this has mainly consisted of sporadic TV, has a preternaturally expressive face--not that it does Franck much good to unwittingly express himself in impossible situations, like the one where both Michel and the investigator are privately trying to pinpoint his whereabouts during the crime. His openness is a liability on several fronts, then, most obviously because he may just be an accessory to murder, but also because one does not go to a cruising spot, it's suggested, to bare one's feelings.

Much has been made of the film's graphic, unsimulated sex scenes, shot with body doubles and usually framed in static medium shots, using minimal camera movements and sparse close-ups. Despite the inevitable comparisons to Abedellatif Kechiche's more romance-tinged marathon sessions in Blue is the Warmest Color, which seemingly launched a thousand think-pieces at Cannes, these moments aren't any more conspicuous than the voyeuristic shots that follow Franck from the parking lot to the beach and back again each day. Nor are they especially out of synch with the scopophilic pans across the beach from his perspective, which take in the natural beauty of the surroundings, bronzed bodies and waves alike, as well as the horrible violence in the water, for a time our little shared secret with Franck.

What's a bit harder to square with Guiraudie's self-conscious aesthetic--there's never a moment where we aren't aware of our perspective, nor incognizant of the camera working as someone's surrogate eye (even if that someone is the filmmaker)--is Stranger by the Lake's gradual transformation into a fairly standard existential thriller about desires that bring us to the brink to death, literalized in the image of Henri forever perched on the edge of a lake known for silurus attacks. It isn't that the form suddenly betrays itself so much as it's a case of submerged horror tropes--like, say, the perfect loved one with a dark secret, or the bad moral choice repaid with violence--coming to the fore rather abruptly, with the film ending in, of all things, a chase scene. Yet what a chase scene. So efficiently minimalist is Guiraudie's style and so finely tuned is his characterization of Franck that the closing moments, which find him lost in the wilderness, feel properly elemental, a nightmare bleeding into waking life. It's a killer.