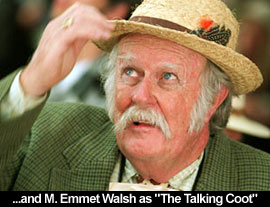 by Walter Chaw It's some sort of tradition now, some kind of sick trick: a collaboration of nitwits releases a "family" film as counter-programming against the glut of morose, adult-oriented awards-season drivel that seeps into middle America in the first few months of the New Year. Kangaroo Jack, Home on the Range, Chasing Liberty, Snow Dogs, A Walk to Remember...each so misguided that to watch them in tandem is to see a pack of dogs outsmart a black man (and comment that he tastes like chicken), a trio of women (cows) receive threats of gang rape, and a wildlife conservationist have her breasts groped. (Then, of course, there's the metaphysical dead end of casting Mandy Moore in anything.) If parents don't pre-screen what their children watch, then care of the child's tender sensibilities is forked over to the chowderheads trafficking in shit, fart, boob, and pratfall jokes, which are only a quarter as damaging as the angry misogyny and casual racism binding them together. Add to the shaggy parade of diseased entertainments the 2005 edition, Frederik Du Chau's flat unwatchable Racing Stripes.

A zebra called Stripes (Frankie Muniz) is abandoned by his circus, adopted by a kindly farmer (Bruce Greenwood) and his insipid she-spawn Channing (Muniz's two-time "Malcolm in the Middle" co-star Hayden Panettiere), lusts after a fine filly (professional harbinger of doom Mandy Moore), and dreams of becoming a racehorse. He's taken under the Mr. Miyagi tutelage of a Shetland Pony (Dustin Hoffman) and the Pony's, um, wife (?), a goat (Whoopi Goldberg), with comic relief--such as it is--provided by a mobster pelican (Joe Pantoliano) and a pair of flies (David Spade and Steve Harvey) prone to rapping, flatulating, and eating great legfuls of horseshit. (An act, as it happens, that we also undertake as the audience, leading to our strange identification with this muscidae Statler and Waldorf.) Because Stripes's sad tale of being the requisite black guy forced to come to terms with bigotry and his own "different-ness" (an African refrain stains the soundtrack every time Stripes is ready for another epiphany) isn't enough to stoke the fragile imaginations of its quartet of progenitors (one of whom, Steven P. Wegner, is also responsible for Chasing Liberty; the story of a young girl trying really hard to get laid), behold a ponderous parallel conflict of Channing wanting to be a jockey like her dead mother and her still-grieving pa doing his best to let her spread her meaty wings.

A story, then, of a talking horse riding a talking zebra, Racing Stripes has as its proudest moment one in which a beast-opomorphized Dustin Hoffman says to Joe Pantoliano, "With a pecker that big, I shoulda known you'd never shut up." In the course of cheerfully demolishing the illusion that the picture is actually for children, this doesn't even make sense as a double entendre. (It would hold that guys with big dicks don't talk much because they don't have to--new meaning to Teddy Roosevelt's maxim.) And if this sort of thing is okay to chat about with your five-year-old, spend a little time, too, explaining why it is that when the flies help Stripes cheat to win a race, that when a defeated foe is further humiliated with a shower of bird crap, that when a mob of "Caucasian" horses beats Stripes near to death, all can be forgiven--so long as you are the champion and everyone agrees to paste a giant rictal smirk on their faces. Racing Stripes is low, venal entertainment. It confirms the fear of every sentient being for the future of our children and our culture--and it's an epitaph, as if additional epitaph were needed, for the respectability of Hoffman, who should have had his temperature taken before agreeing to be in a film, in whatever form, with Snoop Dogg, Harvey, Spade, Jeff Foxworthy, and that Panettiere thing. How much do souls cost nowadays, anyway? Whatever Hoffman got for his, don't sell your kids' for the ninety minutes of relative placidity that this drop of offal provides. Originally published: January 14, 2005.