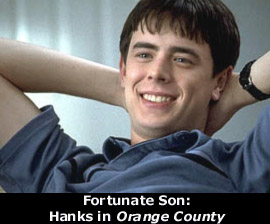 by Walter Chaw The director of five episodes of the late, lamented television series "Freaks and Geeks", Jake Kasdan, with screenwriter Mike White (a scribbler on that same show), produces a surprisingly (or, perhaps, not so surprisingly) tender and observant commencement comedy with Orange County. It's After Hours as filtered through the sensibility of a young, pre-suckage Cameron Crowe, and though it's extremely uneven and clearly hacked to bits (the film feels clipped at 86 minutes), the end result is a cameo-laden piece that for the most part resists the cheap, exploitive garbage that indicates most of the teen comedy genre. While I expected more from the young man who debuted as writer-director of the brilliant Zero Effect (and from White, half of the creative team behind the overrated but intriguing Chuck and Buck), Orange County is a good film--particularly, I suspect, for those anticipating just another teen movie.

Shaun (Colin "son of Tom" Hanks) has turned in his surfing gear for the proverbial Underwood and writing pad. Inspired by a coming-of-age novel (the fictional Straight Jacket) written by a professor at Stanford and discovered half-buried on an Orange County beach, Shaun decides that he needs to escape into the Ivory Tower from the madness of his drama queen of a mother (Catherine O'Hara) and drugged-out loser of an older brother, Lance (Jack Black). When his grossly incompetent guidance counsellor (Lily Tomlin) sends the wrong transcript to Stanford, Shaun, his bleeding heart girlfriend Ashley (Schuyler "daughter of Sissy Spacek" Fisk), and stoner brother Lance race up the Pacific Coast Highway to plead their case to the Dean of Admissions (Harold Ramis).

Orange County is best when it engages in the process of undermining the myths of higher education and the idealized totems of late adolescence. Particularly effective is a sequence set up earlier in the film wherein Shaun, infatuated with a young woman reading a Faulkner tome at Stanford, discovers with shock that she's just a nineteen-year-old away at college. While vets like O'Hara, John Lithgow, Tomlin, Ramis, Kevin Kline, and Chevy Chase ham it up, young Hanks and Fisk anchor and link the proceedings with their unaffected performances. They are youth distilled to earnestness and breathy drama, spot-on and believable as developing individuals and a tentative couple on the brink of the rest of their lives. Stealing the show are Black (at his finest when cast as the bizarre second-fiddle), Ramis, whose stodgy administrator eventually, inadvertently, recalls Donald Sutherland's character from Animal House, and writer Mike White, playing a functionally illiterate English teacher with a cheerful tendency to attribute a few too many films to William Shakespeare.

Ultimately, the biggest disappointment of Orange County is that it is curiously lacking in epiphanies and cathartic moments--you don't so much identify with the characters as with their confusion, the result of which is a film that plays as a warm and occasionally hilarious tune lacking in a compelling hook. Orange County is a pretty good film at its best, fairly harmless at its worst, but with the talent involved (established and burgeoning), it should have been great. Originally published: January 11, 2002.

Thanks for bringing this review back, Walter. Another case of actors, particularly Hanks Jr. and Fisk, elevating a routine script that's a little uncertain - it's best when it feels like a heartfelt dramedy. I still love the moment where Ashley calls Shaun out on the *real* reason he wants to go to Stanford.