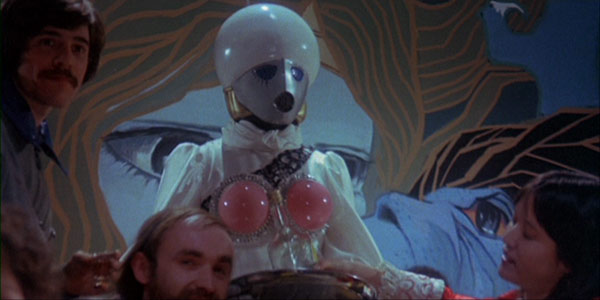 by Walter Chaw Essentially a big-budget, feature-film version of Calvinball if Bill Watterson were a manga artist undergoing a psychotic break, Kinji Fukasaku's balls-insane Message from Space is a very special brand of genius. It honours no structural logic that I can discern, though it does have a kinetic kid-logic, the kind honed from endless summer afternoons tromping around with your buddies, making shit up and being happier than you'll ever be again in your life. Message from Space captures that headiness, that heedlessness, the sort of reckless creativity that charts the course between memorable films by someone like Ed Wood and forgettable films by every other hack with the same level of talent but not the same joyful dedication. I'm not saying Message from Space is a good movie--I can't even say that the reasons for its existence are particularly honourable (it's an obvious Star Wars cash-grab). But I can say that Message from Space is crazy-energetic and has more delightful moments packed into it than a dozen "normal" movies. I also wouldn't underestimate its influence on a generation of kids Star Wars-hungry during that three-year gap between the first film and The Empire Strikes Back. Herein, find the source of Will Ferrell's Ron Burgundy at least, and, incidentally, the better version of Mel Brooks's Spaceballs (and Stewart Raffill's The Ice Pirates).

I don't really know what this movie is about, but here goes: Bad guys in metallic makeup invade a peaceful planet that sends out eight alien walnuts into the universe, the better to attract heroes, The Seven Samurai-style, to defend their peace-loving butts. That's it, I think. The rest of it is indescribable dogfight derring-do that never fails to include shots of our lovable space jockeys Shiro (Hiroyuki Sanada) and Aaron (Travolta-esque Philip Casnoff) throwing their legs over their heads, punctuated by inane interludes with bimbo Meia (Peggy Lee Brennan, who would reprise this role on "M*A*S*H" in a year or so's time), to whom we're introduced as she's fawning over "space fireflies." "No," says a condescending extra, "it's just a name. That's actually toxic ash and space refuse." This information doesn't stop Meia from getting Aaron and Shiro to help gather the radioactive garbage later on, mainly, I think, so that Fukasaku can show the trio swimming around froggy-style in the vacuum of bad greenscreen outer space. It also serves the purpose of reassuring that these idiots will contract space cancer or, at the least, space impotence. The highlight of highlights is Vic Morrow's General Garuda, who spends the entire film drunk on Scotch (Scotchy-Scotch Scotch Scotch) and mourning the death of his best friend, a little Twiki/Tattoo robot (he pronounces it "ro-butt," Zoidberg-style) he's jettisoned into deep space because its warranty expired or something. (The robot's replacement, Beba 2 (Isamu Shimizu), speaks in an Asian patois that suggests in a weird way that Jar Jar Binks was born here, too.) There are shades of Zapp Brannigan and the Lloyd Bridges character from Airplane! in Morrow's performance; it's genius.

Bad guy Rockseia XLL (Mikio Narita, who's not that big) has priceless lines like "HAHAHAHAHA!!! You worry too much, mother," while the whole of it ultimately doesn't play much worse than David Lynch's Dune, come to think of it. It's hilarious, truly, and it seems unlikely that ours is the uneasy laughter that comes from deriding something that's unfortunately poor: When Garuda declares himself Don Quixote and his robot his Sancho before throwing out a little "Henry V" just for spice--precursors, both, to diving out of a spaceship dive-bombing an alien fortress--well, see, that shit doesn't happen by accident. Whatever the case, Message from Space is brilliant, and in addition to being consistently entertaining, it's the equivalent of the French New Wave's critique/redux of American genre cinema. It's a stirring, unpretentious farce that clarifies everything that's stupid about Star Wars (and there was a lot, let's face it) while actually predicting the Yoda character and the entire ending of Return of the Jedi, among various other plot points from future Star Wars pictures. It's neither prescience nor further evidence of Lucas's bankrupt imagination--no, Message from Space is just extremely smart about its culling of all the same Yakuza/manga source material. And it's as good a master-course as any on Western science-fiction serials, working in the same way that Star Wars and later Raiders of the Lost Ark proposed to work. It's the ugly half-brother, sure, but what I'm saying is that not only is it not stupider, it's also a good deal less self-satisfied. In any case, it's the Japanese taking back what Lucas took from them in the first place, right? Also, Sonny Chiba appears on horseback in an inexplicable Lawrence of Arabia sequence as someone called "Prince Han." Yeah, baby! 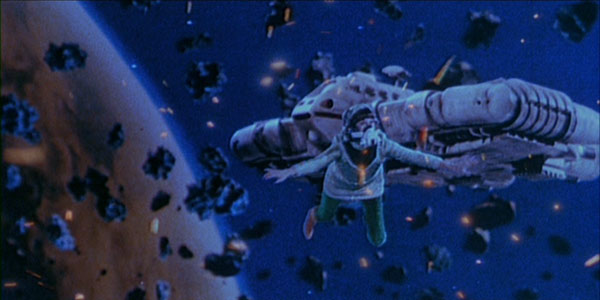 THE DVD
Shout! releases Message from Space, a movie that doesn't need a Blu-ray release if ever there was one, on DVD in a functional anamorphic presentation. Mastered at the peculiar aspect ratio of 2:1, it looks awful--soft, with pitiful dynamic range and mushy grain--but likely about as good as it ever has. Hard to hold this transfer accountable for a picture made for a meagre six-million--spread ultra-thin across a production with essentially wall-to-wall miniature and optical effects--then subjected to who knows how much generation loss abroad. (The source print is clearly of an American vintage, given that it opens with the United Artists logo.) Despite early speculation that the disc would contain the Japanese-language audio or the fabled "blended" track, all we get is the English dub, which has the effect of rendering everything a bit more hilarible. But not in a bad way. The DD 2.0 mono audio is fine in the medium registers, tinny at each end, and otherwise sounds exactly how you presume it will. I had trouble making out some of Morrow's lines, but through the magic of DVD technology, I was able to watch his scenes multiple times over. (Still, the lack of any English captioning is a bummer.) My favourite moment, by the way? When Garuda spots a radioactive walnut in his bourbon and drinks it anyway. "It tastes like...Scotch!" he says through his moustache. This thing is frickin' legend.

A six-page booklet inset by August Ragone provides a hyperbolic defense of the film as something much more than a Star Wars ripper--and you know what? He makes a compelling case. Ragone additionally contributes exhaustive character/actor bios to an onboard "Stars of" text-based feature. An interminable photo gallery slideshow of production art and promotional materials joins a 16x9 batch of trailers in rounding out the supplements. While the English-language trailer hints at the madness to come, the Japanese trailers are even better in that they, hilariously, reveal what Beba 2 sounds like in the original soundtrack (kind of like a Japanese chipmunk, hurray!). From what I can tell, there are four of these, edited back-to-back in a block of indescribable goodness. 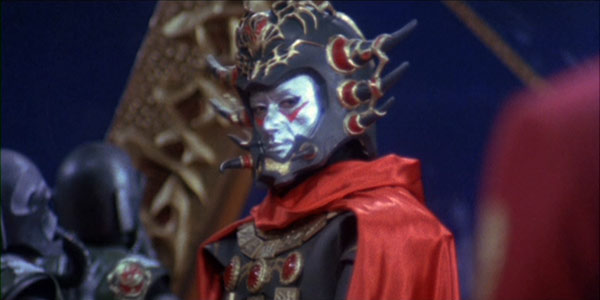 Thanks for this. I saw this on a double bill @ our local rep cinema way back in the early eighties. I think Battle Beyond the Stars (Richard Thomas!) was the other one - gack. I've never forgotten those magic walnuts, but for a time, I had myself convinced that I actually dreamed up the whole thing.