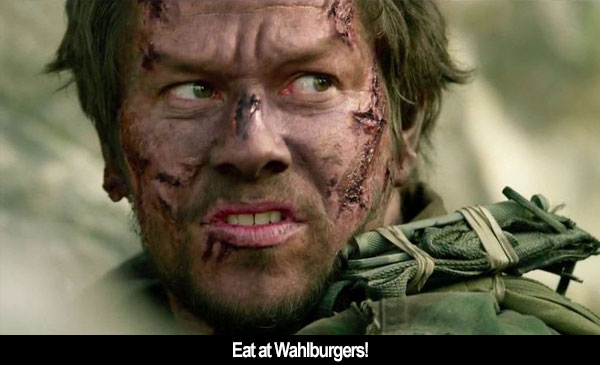 by Walter Chaw Peter Berg is a great action director. He does it with verve, a good sense of space (which is increasingly rare these days), and a sense of both weight and humour. He has excellent timing, as well as an understanding of what's meaningful visual information in there among the dross of motion and impact. Moreover, he seems obsessed with working through issues surrounding what it means to be a man--how too often, it means your social interactions are limited to violence, threats to your sexuality, and hazing rituals dangerous and bestial. I'm a huge fan of his debut feature, Very Bad Things; visually, I think it's wrong to underestimate how influential is his romantic rack-focus gimmick from Friday Night Lights. I love Berg's Hancock, the movie that Man of Steel aspired to be (and if we're talking secondary influences, Zack Snyder owes much of his cinematic vocabulary to Berg). I love The Rundown, and while Battleship is inarguably a misfire, it's also less of a misfire than it could have been. With Lone Survivor, based on the memoir of Navy SEAL Marcus Luttrell, the titular lone survivor of a botched four-man special forces mission in Afghanistan, Berg's examinations of the masculine take their logical turn from bachelor parties to football to superheroes to military action. And for long moments, Lone Survivor is fantastic.

The titular survivor is Marcus (Mark Wahlberg), and his doomed brothers in arms are Michael (Taylor Kitsch), Danny (Emile Hirsch), and Matt (Ben Foster). Their task is to take out a high-ranking Al Qaeda operative in a remote mountain village, but everything goes pear-shaped when a group of shepherds happens upon them staked-out on a mountainside. What follows is around an hour of brutal war sequences as the boys fall back, establish, fall back, establish, get injured (sometimes mortally, by the enemy and by the terrain--the film has the best falling sequences ever), concluding once Marcus finds safe haven in a village where a certain cultural tradition of hospitality ensures that the villagers, poorly-armed and untrained, will stand in front of someone they've welcomed into their circle.

There's a movement afoot, though, that clutches talcum-powdered hankies to affronted ascots in proclaiming that things like 12 Years a Slave are too violent and that The Wolf of Wall Street is "porn." Early reviews of Berg's film have argued that all it is when it's going well is exploitation of violence--a love letter to the American military, perhaps, too right wing on the one hand, too left wing on the other. The truth is that what Lone Survivor is, is ambiguous. It's grey. I liked it less than Black Hawk Down but maybe better than Zero Dark Thirty, two other films about American military intervention and its vast superiority that could only arouse the same audience member who sees a hero in Gordon Gekko and Hud before him. The troubling thing about criticism like this is not the identification of films that actually do glorify what they represent (e.g., The Green Berets), but that it misidentifies those that don't (Lone Survivor). Lone Survivor portrays the United States as having a distinct technological advantage over enemy combatants in Afghanistan. We do. It shows how difficult the terrain is there, and how sadistic is the training to become part of a special forces unit. It shows that there's a feral testosterone-overload that exists in military units deployed in hostile areas (MASH did, too), and it shows how quickly things devolve in a war zone, how the only way people survive is through the grace of their partners and a preponderance of luck. The picture doesn't celebrate its heroes at the end so much as it celebrates that anyone has chosen the military as a calling during times of war. I didn't leave feeling like the movie is glad that these soldiers killed a few dozen bad guys; I left feeling like the movie is glad and sort of surprised that anyone survived at all.

What's lacking in Lone Survivor is a real sense of individuality among our quartet of heroes. It makes sense if you take that as a critical commentary on the dehumanizing effect of war or training or both, but that may be giving too much credit where none is due. In the thick of it, the way I told the guys apart was by noting the actor and not the role--and, because the title and poster and virtually everything about the promotion of the piece indicates that Wahlberg's character survives, there's really not much suspense in the outcome. That the film is as effective as it is has everything to do with Berg--with his style, with his obvious passion for the subject, with his interest in the way men interact during tension and conflict. A sketch, then, rather than a completely-realized work, Lone Survivor is more meaningful taken as a whole with Berg's filmography. When the dust settles, his stuff--along with the portfolios of guys like Doug Liman, for instance--will persist and present, if you're looking for one, an opportunity to trace the legacy of guys like John McTiernan and Walter Hill in American action cinema.

I'm a big fan of "The Rundown," too. But I'm far from a fan of Berg's "The Kingdom," which was irritatingly smothered with ultra-jittery camerawork that practically gave me whiplash.