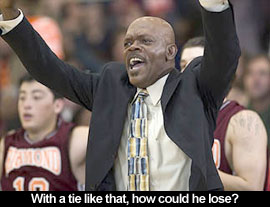 by Walter Chaw Coach Carter is Dangerous Minds giving the gas good to Hoosiers. It's Stand and Deliver and Bad News Bears in flagrante delecto. The offspring of these dread unions is a trundling spawn so familiar, so much like its collection of moronically agreeable parents, that it's impossible not to sort of like it even as you're definitely sick of it. As is usually the case for movies like this, Coach Carter was inspired by a true story, which generally means that the events that instigated this project are not consequently saccharine and predictable enough to satisfy the imaginary demands of its imaginary audience. So there will be the athlete/students broken down into types to save time and energy on fleshing out the extended supporting cast, and there will be the valiant Dead Poets Society teacher who so rouses his/her hangdog students that they will eventually mass in a public show of support (standing on desks, running after ambulances, biking after cabs) when The Man (the school administration, the angry backwoods community) inevitably cracks down. What's not to like?

Coach Carter (Samuel L. Jackson) is operating a small, community-supported sporting goods store when his old high school basketball coach tabs him to take over for him. It seems the inner city world has passed him by, Bill Cosby-style, and Carter's brand of sadistic love is just the medicine for ebonics, drive-bys, and drug deals. After marking his territory by beating up a mouthy punk, he puts his misfit team through a series of gruelling drills (Heartbreak Ridge, The Dirty Dozen, Stripes) to whip them into shape. But because Coach Carter is set on the mean streets instead of backwater Indiana, Carter has to deal with low academic achievement and disinterested faculty instead of drunken fathers and mute shooting guards.

The clear irony of this genre is that it seeks to tell the story of a rebel in as conventional a way as possible. The movie features the requisite number of noble speeches about empowerment; the requisite forays into teen pregnancy, college applications, and criminal cousins; and the requisite confrontations with intractable administration godheads who just don't understand that Coach Carter's name is also the name of the film. It's this year's Miracle with a slightly better screenplay, and its success relative to that picture will speak volumes about race and demographics in this country. But the real danger of Coach Carter is that by making all of its characters archetypes of a certain malady, it's easy to look on it as an insular cultural artifact ready for the condescension of the ruling class. No matter whether the stereotypes have a basis in reality, if you present troubled kids (worse, black basketball stars) as caricatures with neither individuality nor humanity (and subsequently gift them with a crowd-pleasing happy ending), you run the risk of reinforcing bigotry instead of addressing the cancer that metastasizes in the margins of our divided society. Originally published: January 14, 2005.