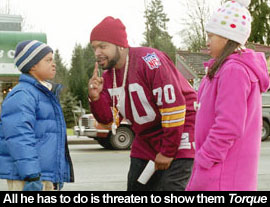 by Walter Chaw Hot on the heels of the abominable Racing Stripes comes Are We There Yet?, an Ice Cube vehicle the rapper-turned-actor also produced that teaches in broad terms that black people like rims on their cars and bling around their necks, that Asians are just irritating and venal under/oversexed white people, and that actual white people are either hillbilly truckers or dancing, rapping grandmothers. Projectile vomit, scary slapstick, and pissing on women share equal time with forced sentiment and actions so inexplicable as to exist only in the infernal nether-verses reserved for this kind of jerk-finds-a-heart flick. Piling on the pleasure, a pair of demonic children carry on director Brian Levant's (Problem Child, Beethoven, Jingle All the Way) proud tradition of featuring insufferable kids in unwatchable movies that will be popular enough to ensure that this grade-A assclown gets to continue to making them. Levant's a racist and a card-carrying Neanderthal--and if he's not, he's actually something worse. If he's not the retarded ogre that his films suggest he is, then he's exuding this gruel with a calculated purpose instead of just a moronic fecklessness. That the little boy in this film has a doll that resembles the MegaMan toy at the centre of Jingle All the Way tells me that Levant is harking back on that debacle with fondness, which is a little like the Catholic Church harking back fondly on indulgences, child molestation, and the Crusades.

Consider ex-pro 'baller Nick (Ice Cube), decked out in replica jerseys and silver chains and driving home his new ride, threatening to beat up a kid in a crosswalk along the way to illustrate what a modern W.C. Fields he is. How delightful. Consider, too, the two allegedly lovable brats: oily, arch Lindsey (Aleisha Allen) and asthmatic dork Kevin (Philip Bolden), who open Are We There Yet? by almost killing one of their mother's suitors with Home Alone devices and a healthy dose of capricious bile and uncontrolled rage. The message of this film is extraordinarily confused (par for the Levant course): it brings together three people who are, without hyperbole, three of the worst people on the planet, and it expects by the end that their forced proximity to one another (Nick's in it to screw the "hot" mother Nia Long) will allow each of them to grow into actual human beings. The kids become adorable little pyjama-clad angels (but only after they see their estranged father with a new baby), Nick becomes a dedicated parent (but only after he endangers the kids' lives and awkwardly attempts to forge a bond by saying that he, himself, was abandoned by a father), and mama Suzanne realizes that Nick is boyfriend material (but only after she realizes that this guy who's been giving her rides to work for a couple weeks was probably not the best person to chaperone her precious tots).

Nobody, at any point, behaves like a human being in Are We There Yet?. In fact, there isn't anything in the film that isn't some combination of criminal, insulting, and asinine. Certain people still find farting and getting kicked in the crotch to be hilarious, but, curiously, they weren't among the row of eleven-year-olds sitting behind me in the public screening: from what I could gather, they were trying to decide what they would do until their parents came for them were they to walk out of the film. Kids are a hell of a lot smarter than we give them credit for, which makes it that much more of a shame that jerks like Levant and Ice Cube (who, with his privileged background, should really know better) generate movies like this, ostensibly for kids, that instead pander to the absolute lowest common denominator--not kids, not adults, not black, not white, but the worst of every demographic, the type to decide before going to a film that they already like it, that all this noxious ugliness is "only a movie," and, worse, that they're going to make their kids watch it no matter what the evidence before them. Are We There Yet? made me really angry, and not simply because it's bleak garbage aimed at the most impressionable portion of our culture (jackasses), but also because it doesn't even have the wit to be energetic, funny or humane en route to being inane, irritating, and corrosive. Originally published: January 21, 2005.