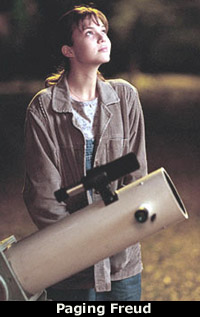 by Walter Chaw An interminable trudge through afterschool-special hell, Adam Shankman's A Walk to Remember stars teen pop starlet Mandy Moore and is based on a novel by best-selling schmaltz-meister Nicholas Sparks--a combination sure to warn away most reasonably intelligent folks. After a kinetic opening sequence that recalls a nearly identical scene from The Lost Boys while giving false hope that A Walk to Remember will be an agreeably nostalgic diversion, the film becomes a vaguely surreal morality play scripted along the straitjacket genre conventions that indicate each of Sparks's novels. A Walk to Remember is hopelessly unrealistic and often uncomfortable to watch, far more interested in presenting Moore with showcase opportunities to peddle her cavity-causing music; it threatens to do for her what Glitter did for Mariah Carey. Worse, if you don't know every single plot point and twist after the first twenty minutes, you've done the sensible thing and left after the first ten.

Landon Carter (Shane West) is a good boy in with a bad crowd who makes a mistake one night and pays for it by falling in love with the school's resident right-wing fundamentalist preacher's daughter, Jamie (Moore). An unintentionally hilarious moment (more hilarious than all the others, in fact) has Shankman lingering on a close-up of Jamie holding a Bible on her lap--character development for the subtlety impaired. Landon's a product of peer pressure, Jamie's apparently immune to the stuff (save for a key moment in which she's suddenly not), and though her daddy (Peter Coyote) objects, can there be any doubt that Landon and Jamie were meant for one another?

The film is rife with clumsily telegraphed moments and an abominable adaptation by Karen Janszen that makes the mortal error of borrowing too much from the excrescent source material. Ears should prick up when Jamie lists things that she would like to do before she dies: why introduce this element unless you're going to use it first as a way for Landon to lever his way between Jamie's tightly clenched thighs, and second (spoiler alert for the "I've never seen a movie in my life" crowd) as a means to unsuccessfully render her inevitable passing from a wasting disease more poignant?

A Walk to Remember is utterly shameless in its machinations: its only intention to awkwardly manipulate its audience and pander to the Mandy Moore fan club with two full-length Moore song performances and innumerable testimonies to her buttermilk-scrubbed chastity. Though the film begins interestingly enough, with West providing his character a depth no doubt aided by its similarity to the role he plays on ABC's "Once and Again" (the troubled son of a broken family), it takes no time at all for the script to demand that every bully turn over a new leaf and every contrived plot strand receive its disturbingly literal resolution.

Clocking in at just over an hour-and-a-half, A Walk to Remember is about forty minutes too long (its ideal length naturally the same as those hoary preteen soapers from which it springs), and as soon as Landon changes his stripes, he stops being recognizable and starts resembling a Stepford kid, much like Jamie. Because of several scenes set in a cemetery, where Jamie retires to gaze mournfully at the stars, I wondered briefly if Shankman forgot to mention that she was zombie--a vital fact that would at once explain Moore's stunningly bad performance, West's mid-film transformation, and my growing feeling of horror and revulsion. Originally published: January 25, 2002.