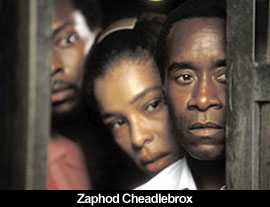 by Walter Chaw Marking the second euthanasia melodrama of the 2004 awards season after Clint Eastwood's Million Dollar Baby, Alejandro Amenábar's peculiar follow-up to The Others is another ghost story of sorts documenting the last, sad days of Ramón Sampedro (Javier Bardem), made a quadriplegic by a distracted dive into a shallow tide pool. "Shallow pool" could also describe the film, a miserable little gimp-of-the-week exercise awash with clichés and platitudes that the real Sampedro would probably have found condescending and insulting. The Sea Inside (Mar adentro) is the very equivalent of an elementary school teacher taking your hand and helping you find a seat on the short ride to made-for-TV-dom. If not for its unromantic central performance from Bardem, the best actor in the world at this moment, this appallingly sentimental work would be a candidate for the most misguided movie of the year.

The blame begins at wunderkind Amenábar (whose loose supernatural trilogy--Tesis, Abre Los Ojos, and The Others--suggested, in a good way, a Spanish M. Night Shyamalan) deciding to rein in his gothic impulses and strike a pose on the crucifix of prestige-porn self-importance. With Ramón confined to his bed, suffering the indignities of anyone who relies completely on the care of others, suddenly enter two love interests: beautiful lawyer Julia (Belén Rueda) and plucky blue-collar factory worker Rosa (Lola Dueñas), together introducing an element of class struggle into the proceedings insofar as the class struggle that had not already been introduced by a glut of punishingly tedious exposition. Just to top off the paternalistic righteousness jug, they also import more pathos into Ramón's apparently insufficiently pitiable plight, as do an Alzheimer's-afflicted father (Joan Dalmau), a simpleton nephew (Tamar Novas, playing a pastiche of several characters as the, sniff, son Ramón never had), and a degenerative disease for Julia (Cerebral Autosomal Dominant Arteriopathy with Sub-cortical Infarcts and Leukoencephalopathy), thus allowing her to have a tear-jerking coda of her very own. If you're still conscious after freebasing all that undiluted schmaltz, an unforgivable score (by quintuple threat Amenábar, credited with producing, editing, writing, and directing duties), all soaring violins and, the humanity, bagpipes and Irish fifes, should finish the job.

The one moment that isn't designed to perpetuate the "noble cripple" archetype of manipulative middlebrow claptrap like The Sea Inside, that started out with potential, is an argument between Ramón and quadriplegic Catholic priest Padre Francisco (José María Pou). Francisco's wheelchair can't fit up Ramón's stairwell (but naturally, Julia's can), and so the two use an altar boy as a go-between before resorting to shouting at one another down a flight of steps. The distance between the two theoretically and theologically is thus made manifest in their separation onscreen and in the house, but what should have been a battle between two reasonable men about how best to honour the sanctity of life (one wants to end it, the other to perpetuate it) becomes a full assault on the Catholic church. That's simply not fair, even if my instincts are more in line with the attacker's reasoning than the priest's, and Amenábar handles it with first an unbecoming slapstick, then an embarrassing dressing-down not by Ramón, but by Ramón's primary caregiver and sister-in-law Manuela (Mabel Rivera). While good Padre is a blowhard, he shouldn't be made the object of ridicule in a film that so proselytizes the absolute divine sanctity of a man's dignity. To that moment, The Sea Inside is just bad--thereafter, it's hypocritical, too.

As it happens, dignity as a thing afforded the underprivileged by the ruling elite is what Canadian U.N. peacekeeper Col. Oliver (Nick Nolte, playing a composite) speaks of when he tells hotelier Paul Rusesabagina (an excellent Don Cheadle) in Terry George's Hotel Rwanda that "To the West, you're not even a nigger. You're an African"--a thought hinted at earlier by drunken photojournalist Jack (Joaquin Phoenix), who, upon providing footage of the Rwandan genocide to his news agency, tells Paul that "people will see it, say 'Oh, that's awful,' and go back to their dinners." It's a shame that the two strongest lines of dialogue in the film are provided by Caucasian characters, but it's a good thing that Hotel Rwanda is getting the kind of attention that it's getting. This isn't a great film, but it threatens to be an important one, and though it's laden with histrionics both in its tongue-bath of a score (by Rupert Gregson-Williams and Andrea Guerra) and in a godawful performance from Sophie Okonedo as Paul's long-suffering wife Tatiana, it does provide, dare I say, an easy way to get the broad facts about a modern atrocity without being that difficult to watch. It's a tactic Steven Spielberg took with Schindler's List (the film to which Hotel Rwanda is most frequently compared), looking away from the violence while focusing in on its emotional toll on the survivors.

Like Schindler's List again, Hotel Rwanda revolves around the pluck and ingenuity of one man who's insinuated himself in with the genocidal elite instead of the grist and nastiness of hatred drawn across arbitrary lines. Paul, who, through a complicated system of bribes and favours, turned the Belgium-owned four-star hotel that he managed (Hotel Mille Collines hotel in Kigali) into a temporary refugee camp when the Hutu tribe in Rwanda decided to decimate the Tutsi tribe, becomes the focal point of African nobility in a sea of African troubles. White Europeans, such as Red Cross worker Ms. Archer (Cara Seymour) and Belgian hotel owner Jean Reno, are provided to register moral superiority and offense while a finger is wagged, with every justification, at an international community led by the United States under Clinton that refused to intervene. The lie of America's interest in deposing dictatorships and righting apocalyptic injustices for humanitarian reasons is the shame that hangs over the picture--and over every single citizen of our "enlightened" culture who still views selective intervention as anything but a personal crusade driven by impulses that are only eventually humanitarian.

The picture itself can be criticized in the same way that Stanley Kubrick once criticized Schindler's List: "That was about success, wasn't it? The Holocaust is about six million people who get killed. Schindler's List was about six hundred people who don't." More so than Spielberg's film, however, Hotel Rwanda flirts dangerously with patronizing the very people that it seeks to humanize. Though the story laudably revolves around Paul, an African character, instead of, say, Nolte's UN Colonel (the basis for whom is probably retired Lt. Gen. Romeo Dellaire), there remain the problems of saccharinizing genocide and reducing all the other African characters in the film to victims or enemies. An appeal to conscience like The Sea Inside (lump in Mel Gibson's The Passion of the Christ and Michael Moore's Fahrenheit 9/11 while we're at it), it fails in the same way in not trusting that the bluntness of the truth is enough undecorated by familiar dramatic movements, orgasmic expository scores, and scripts that massage the lowest common denominator at the expense of their subjects. The truth is complicated*; Hotel Rwanda is simple.

Embedded in that simplicity is the understandable desire to reach as broad an audience of folks ignorant of these events as possible (and jerk their tears in the process). Knowing that for the segment of the population wanting to feel as though they've given at the office through the magic of cinema, the picture will make no more of an impact than one of those Sally Struthers infomercials begging you to help stop plague and famine. It's The Killing Fields recast in Rwanda: a movie that could potentially act as a serviceable starting point for good people seeking the truth behind what Dellaire calls "The mud, the blood, and the suffering" of the "other" eighty percent of the world. Track down Steven Silver's indispensable documentary The Last Just Man, think of the 800,000 Rwandan's massacred over the course of 100 days in 1994 while the rest of the world stood by, and have a pause the next time the rationale for our current commitment of 150,000 of our soldiers to a Middle Eastern meat grinder is proffered with no explanation as to why we're noticeably mute when things like Rwanda happen. Originally published: December 24, 2004.

*Link to a very fine BBC article on the Rwandan genocide. return