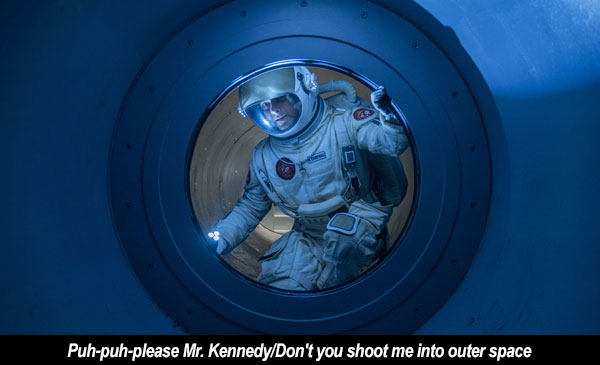 by Walter Chaw Sort of expecting an impressionistic adaptation of David Bowie's "Ziggy Stardust" cycle, imagine my surprise to discover that Ruairi Robinson's The Last Days on Mars is a derivative, flaccid little space-set horror flick that proves the maxim that movies with "Mars" in the title tend to suck. It boasts an exceptional cast, anchored by the ever-steady Liev Schreiber, who receives strong assists from Olivia Williams, Romola Garai, and Elias fucking Koteas. And it features a script by Clive Dawson, based on a Sydney Bounds short story, that is so familiar to genre enthusiasts by now that if you can't predict who lives, who dies first, even what the last shot will be, well, you just aren't paying attention. See, The Last Days on Mars is about the last hours for this scientific expedition looking for proof of life. On the verge of giving up, they find proof of life. But the life is evil and it turns them into space zombies. No, seriously.

The cool one is Campbell (Schreiber), the bitch is Kim (Williams), the love interest is Lane (Garai), and the ineffectual captain who gets what he deserves, I guess, is Brunel (Koteas). The struggle, really, is in finding something new to say about a film that, no shit, has been executed in exactly this way at least two or three dozen times already. Not only are zombies played-out, but earlier this year we had Europa Report, which is essentially this premise with a space octopus instead of space zombies. The performances are good (this isn't a career killer for anyone), but there's minimal gore, and it's neither scary, nor tense, nor scientifically profound. It doesn't ask any questions, doesn't answer any, doesn't try. You can see that it wants to be a character study if you look at it the right way under perfect conditions; you can maybe even surmise that it wanted to show what happens to people under pressure. But all The Last Days on Mars is, finally, is a study of how to keep making the same goddamned thing over and over and over again, hoping to catch the ever-shrinking demographic that hasn't seen it before.

Out of desperation, I kind of want to talk about the Mars rover and it occasionally finding evidence of water at some point in the planet's history; despite massive cuts to NASA funding, there's still plenty of fascination with Mars and space exploration. I want to talk, too, about the quarter of a million people who instantly volunteered to take a one-way trip to the Red Planet, because, apparently, people don't read The Martian Chronicles anymore. Frankly, you can discuss these things without seeing The Last Days on Mars--you could discuss them while seeing it and there would be no one in the empty theatre to shush you. For my money, the best modern Mars movies remain Paul Verhoeven's Total Recall and Antony Hoffman's unfairly maligned Red Planet. What were we talking about again?

Surprised there's no mention of Ghosts of Mars.