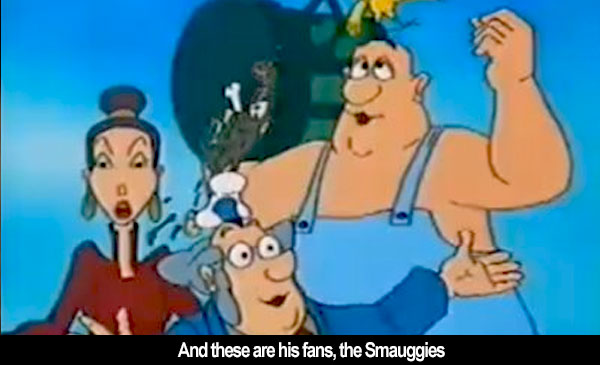 by Angelo Muredda And so arrives Peter Jackson's The Hobbit: The Desolation of Smaug (hereafter Hobbit 2), landing at its appointed hour a year after its predecessor's mixed debut like a job application received after the position has already been quietly filled. While middle entries in trilogies are always awkward stepchildren, Hobbit 2 is a very special problem case: It consists of roughly the midsection of J.R.R. Tolkien's fleet fantasy book for children, cracked open and fattened with multi-coloured Post-it notes until the spine can bear no more. Here at last, then, we have the week-old meat of the only Hobbit adaptation Jackson could deliver, having spent a decade steering comically overextended editions of the Lord of the Rings trilogy, a 3-hour version of King Kong, and a wrongheaded interpretation of The Lovely Bones as a Nintendo-ready CG light show.

When last we saw poor Bilbo (Martin Freeman) and his less-than-merry band of diasporic, vaguely Semitic dwarves (an allegory Jackson still does not have the stuff to lean on all the way), they'd just survived an unfortunate encounter with the Great Goblin. It's onward, then, to the Lonely Mountain, where would-be dwarf king Thorin (Richard Armitage, with a beard full of gravitas) hopes to reclaim his people's birthright from the dreaded Smaug (voiced by the approximately two-note Benedict Cumberbatch). Smaug, of course, is not a cloud but a dragon we briefly saw stirring in his bedchamber last time out and now find fast asleep over a heap of gold, apparently as unfazed by the events of Hobbit 1 as the rest of us were. So lackadaisical is the journey that Gandalf (Ian McKellen) has found time to split from the pack to star in his own half-hearted detective story, an investigation into the origins of the gloomy Necromancer (whose hisses and roars belong to Cumberbatch as well), while elf-archer Legolas (Orlando Bloom) shadows the company and his would-be bride, a warrior and guard named Tauriel (Evangeline Lilly).

If there's a key to what's wrong with this unduly-bloated middle chapter, it's Legolas, unseen in the book and best kept that way, despite the curious jolt we feel upon noticing that the slightly rumpled and thickened Bloom, in the years since The Return of the King, has aged into a doppelgänger for Jason Isaacs's Malfoy patriarch. Legolas's appearances in the Lord of the Rings saga were as sure a sign of narrative deadweight as any, a restroom-break signal to anyone who'd already his or her fill of arrows fired into Orc backs and faces. Further to that thankless function (dutifully served here once again), Jackson now asks that Legolas also play puppy dog, yearning for the dishwater-dull new character of Tauriel as she pursues a dwarf she loves, just as the angels dote on their pet humans in Wings of Desire. Lilly can hardly be blamed for Tauriel's flat surrogacy of the Rings trilogy's almost-as-vacant Arwen: everyone simply does what they can with the nothing they're given, a stack of supplementary material added to justify the need for a trilogy.

And what of the Hobbit or the dragon that lend the film its respective title and subtitle? What of the dwarf king? A distressingly ill-proportioned movie that seems desperate to be about anything other than its actual story, Hobbit 2 fleetingly comes to life whenever it remembers its ostensible subject, the sorry company's encounter with Smaug en route to the unlikely dwarf renaissance. Perhaps owing to the actors' existing rapport on "Sherlock", Bilbo and Smaug's tête-à-tête is modestly enjoyable, the stuff of a loquacious fantasy novel packed with riddles rather than the sword and sorcery drudgery with which Jackson is obviously more comfortable. There's so little of Bilbo, though, that the film's gestures to its long-forgotten conceit--that the smallest of us may yet be capable of the greatest feats--are more insulting than comforting. When Howard Shore's familiar theme from the Shire is cued as an elder dwarf notes, channelling Gandalf's dozen or so pep talks to Frodo in the Rings trilogy, that hobbits really are courageous things, one imagines Jackson shrugging behind the camera, silently mouthing, "I guess."

The closest thing this movie came to provoking "thought" was when I wondered what they'd done to Bloom's eyes and why. Followed by wondering how they made Smaug look so incredibly good, but molten gold look incredibly awful.