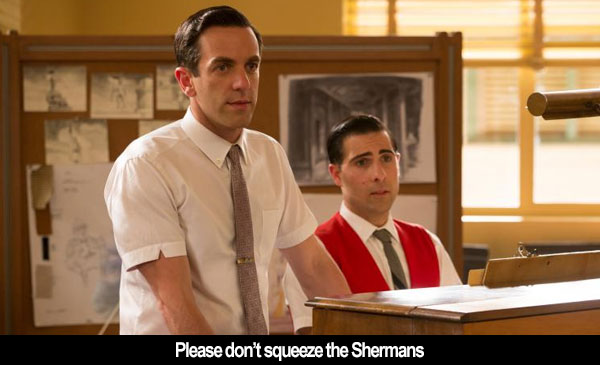 by Walter Chaw Oh, I get it, haha, this is some kind of joke, right? Because no one in their right mind would remake Finding Neverland as this twee bullshit. ...Wait, really? Okay. Because I'm assured that this happened, presented for your approval is (snicker) Saving Mr. Banks, directed by (haha) John Lee Hancock from a screenplay by a team one half of which (bwahaha) is currently writing the Fifty Shades of Grey adaptation. This is rich--are you serious? Okay, okay. So Saving Mr. Banks is based on the adorable true story of how everyone's favourite union-busting, HUAC finger-pointing anti-Semite Walt Disney (Tom Hanks) convinced brittle British bitch P.L. Travers (Emma Thompson, the "I'm so veddy cross" 'elevens' crease between her eyes upstaging her in nearly every scene) to sell him the rights to her creation, Mary Poppins. He all of practiced, televisual charm and she all of powder and crumpets; how will Walt ever batter down the barriers that Ms. Travers has erected from the hell of her Andrew Wyeth flashback childhood, complete with (snigger) Colin Farrell as her fatally-flawed (and handsomely alcoholic) da, Robert. Who gives a shit? More rhetorical questions: Who really likes--I mean really likes--garbage like this? Is there anyone at this point who thinks it a great idea to peanut-butter a shameless Thomas Newman score over every exposed nook in a movie aimed at cat ladies in Mickey Mouse sweatshirts? Saving Mr. Banks is dribble of the first order. What I wouldn't give to see Hanks play Disney's 1931 nervous breakdown, moreover to have our very own Jimmy Stewart choose the same late-career path as the actual Stewart and begin playing darker roles in less conventional films. Admittedly, Captain Phillips is mostly crap, but it's not drool, and Hanks is great in it.

Alas, Saving Mr. Banks is this magically-scored handjob of a movie that makes Travers's obvious mental instability and borderline sociopathy a happy-happy-funtime affectation and Disney's bottomless avuncular warmth and patience in the face of it the revisionist misrepresentation of a man notorious for mistreating his indentured employees. Honestly, the film would only have benefited from showing a deeply ambiguous Disney. It's not to say that the Travers character doesn't score trenchant points when she complains that Disney's legacy is largely based on a dishonest treatment of conflict that's ultimately more damaging to a child's moral development than it is elucidating or useful (truly, how much witch-stabbing is there in the workplace?), but it's all undone by her eventual--spoiler alert, Disney makes Mary Poppins!--capitulation to the Mouse, along with her ability, with all that filthy Magical lucre, to save her beloved bungalow back across the pond. Boy, there are a lot of minor chords played with feeling in this movie to underscore that although it's called Saving Mr. Banks, it's actually about saving Ms. Travers. Chills? Me, too, man. Me, too. The songwriting Sherman brothers are brought to shambling half-life by Jason Schwartzman and B. J. Novak, who at once provide both cozy nostalgic tweaks for people who still like Mary Poppins and Chitty-Chitty Bang Bang and straight men to Travers's frigid disapproval of their piano-playing whimsycalifragidocious.

It's all a plot to seduce a disturbed woman into trading her obvious cry for help for some financial security into her dotage while Uncle Walt makes a mint. You could, in other words, read Saving Mr. Banks as a horror movie. Consider that it's also possible to read it as a meta-fantasy in which a based-on-a-true-story movie is about the making of a true-story movie, because who knew that, as we discover, Mary Poppins was based on a true story? I liked the moment on the merry-go-round they feature in the trailer, in which Disney confesses that he's "brought [her] out here for monetary gain," because although it's taken out of context, it's a beautiful confession of exactly the context and, furthermore, illustrative of the way that this film is just a continued falsification and exploitation of Travers and her creation. I also somewhat appreciated the not-quite-but-close-enough nod to the fact that Walt's vision of Travers's work is absolutely not what Travers had in her dusty, fusty, Ms. Havisham mind, nor is Saving Mr. Banks anything that anyone with much taste would waste time defending. At the end of the day, Saving Mr. Banks is an irritating, condescending, middlebrow sop that appears at the right time of year but has neither the firepower nor the staying power to win a goddamn thing except this sort of derision and the uncomfortable silences at elderly holiday parties as we all agree to pretend not to have seen the piece of shit the poor old dear loves. Then again, most of us won't be pretending.

I can usually tell the quality of Walter's hit pieces by all the weirdos (who presumably spend great amounts of time harassing people they don't agree with on Rotten Tomatoes) that come flooding out of the woodwork to either defend the hated film in question or offer forth their own not-terribly-constructive criticism, as if anyone cared. This one looks like a home run, judging by the quantity of well-adjusted folks who felt the need to dispense their invaluable opinions.