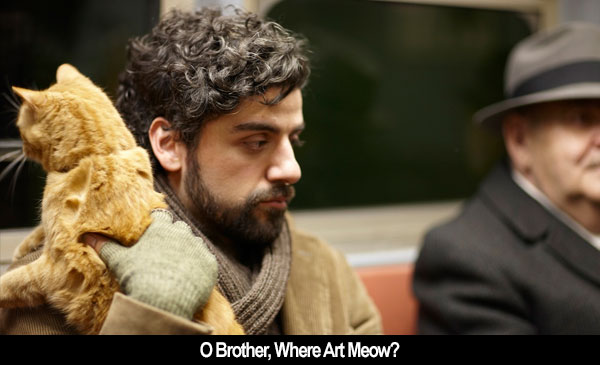 by Walter Chaw I love the Coen Brothers, despite my suspicion that most of their movies don't think much of me at all. What's often read as disdain for their characters I've read mainly as antipathy for their audience: I believe they like their characters just fine, it's just that they could give a shit about your opinion of what happens to them. I love the Coens for their literary acumen, for their fine ability to understand not simply the form of genre--and, in their adaptations, of authors--but the entire function as well. They don't just adapt Cormac McCarthy and Charles Portis novels, they adapt those writers' entire bodies of work. O Brother, Where Art Thou? is a remarkable retelling of The Odyssey, for instance, because in addition to following the outlines of the poem, it adapts its themes and storytelling strategies; it's a dissection and a representation and glorious, of course. They return now to The Odyssey--or, at least, to the character of Odysseus--in Inside Llewyn Davis, a picture set in 1961, among the bohos and coffee shops of a Greenwich Village on the verge of Bob Dylan and the counterculture, and it's populated with lost souls in overlapping underworlds. Transpose that passage from Homer where Odysseus fills troughs with sheeps' blood to draw the undead (and finds his poor deceased mother there at her drink) to scenes in Pappi's (Max Casella) infernal nightclub as proto-hipsters and neo-beatniks assemble blandly on the edge of a trembling something while performers bleed out before them. In rituals for new gods, after all, there must be lambs to slaughter.

The movie opens with Llewyn Davis (Oscar Isaac) singing an old standby about death and regret--by now something of a Coen standby itself, a mission statement found somewhere in most of their work--and closes with the same scene, extended out to reveal the cruellest blow of all. It's a testament to where the Coens are as artists that almost nothing is provided in between in terms of context or exposition. The best sequence in the film is Llewyn's subway ride through the period with a cat companion (named, heh, Ulysses), scored by a duet Llewyn recorded once upon a time with a partner, now dead, the victim of a short jump off the George Washington bridge. It's beautiful. It's melancholic. It makes you cry even if you never rode that line in '61, because the way it's shot is intimate, rapturous. The best scene in the film is the moment immediately following Llewyn's audition for sour club proprietor Grossman (F. Murray Abraham), where Grossman recommends that Llewyn reunite with his dead partner and, letting it be, Llewyn agrees. But Inside Llewyn Davis isn't something so quaint and familiar as a movie about starving artists. Rather, it's about being brilliant without being a genius. Casting Abraham in a supporting role gathers resonance, remembering his turn as Salieri: there the dreamer, here the dream-breaker, as Llewyn goes from gig to gig, misadventure to misadventure, proving himself through trials and hardship yet finding no gold at the end of the rainbow. Inside Llewyn Davis distinguishes itself from similarly-minded 2013 films like Gravity and All is Lost in that way, refusing to valourize his struggle nor to offer any sort of supernatural visitation to ex machina Davis's way to an unearned ending.

Homeless, Llewyn crashes on friends' couches. He stays with folk-singer/married couple Jim and Jean (Justin Timerberlake and Carey Mulligan), the one oblivious to him, the other possibly pregnant with Llewyn's baby and furious about it. He stays with larded professors the Gorfeins (Ethan Phillips and Robin Bartlett), who reveal in their unfailing kindness that they would kind of like to add Llewyn to their collection of indigenous artifacts. And he stays with fellow traveller Al Cody (Adam Driver), with whom he records a ridiculous novelty record (one that subtly prefigures Ziggy Stardust by almost exactly a decade) and shares a sad little secret they both keep under the table. Effortlessly, Inside Llewyn Davis encapsulates the exhilaration of creation and the disappointment of completion. It's sexual, and so the film has a conversation about abortion run parallel to Llewyn's odyssey; it's grandiose and self-deluded, and so it creates grotesque jazzman Roland Turner (John Goodman), the sole passenger in a hurtling metal coffin, speaking of Santeria and the zero-sum game of a life in the light. Turner is the corrective to the Robert Johnson character in O Brother, Where Art Thou?, falling somewhere between Johnson and Goodman's own Charlie Meadows (a.k.a. "Mad Man Munt") from Barton Fink. In fact, in its long shots down corridors, in its artists in arrest, Barton Fink, at the end of the day, is the Coen movie Inside Llewyn Davis most emulates. Isaac even resembles John Turturro, and his Davis echoes Fink's self-righteousness and eventual despair. Taken together, the two pictures form a sensitive diptych of what it means to be an artist in a world that doesn't value them. Along with True Grit, Inside Llewyn Davis is late-career proof that there might be a heart beneath the Coens' misanthropic exterior after all.

The CB's paint a boring picture about someone without that 'breakout' talent who is, nonetheless, sincere. In this sense, a line from the film - approximately: is that what those of us outside of show biz do - "exist"? - seems central. For this is what the people in this film do - they exist. Yes, the CB's clearly, though not obtrusively, were more enamoured by the set than the characters strutting therein. Regarding your remark of the "disdain" that is swerling around the CB and audiences, I tend to feel more like indifference and impatience, at times.

It also seems a shame that this is attached to an actual historical figure (though really who gives a shit about that) as, from living accounts of those that knew the man, he seems to be entirely different than he portrayed here.

I left the cineplex wishing I had listened to my wife and had gone with American Hustle. And I've seen every CB movie at least once. The CB's reliance on quirky characters indicated possession of a sensibility that realized if they could not make people care they could at least entertain. They should hesitate when seeking to ignore that.