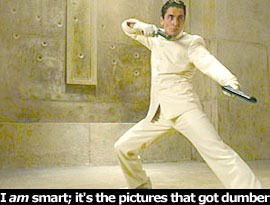 by Walter Chaw After cutting his teeth as a director on the Brian Bosworth vehicle One Tough Bastard, Kurt Wimmer proves himself grotesquely unprepared for his hyphenate debut: the futuristic stink-fest Equilibrium, starring Christian Bale, Emily Watson, and Taye Diggs. Set in the post-apocalypse via a series of tired title cards and voice-overs, the film is immediately recognizable as an ironically illiterate rip-off of Ray Bradbury's Fahrenheit 451 and George Lucas's Aldous Huxley photocopy THX-1138. Pulling scenes entire from Blade Runner, Citizen Kane, and The Matrix while pulling philosophies entire from--yes, I was surprised, too--Gymkata, Equilibrium is another Dimension genre film made for no money that stinks a lot like Gary Fleder's excrescent Impostor from earlier this year, though it somehow manages to be considerably funnier.

So in the future it seems that emotion has been outlawed--a strange thing, for though the characters in the film appear to experience jealousy, anger, pride, and sadness, the audience is imbued with a majestic feeling of sleepy unconcern. To enforce the ban, the city/state of Libria (i.e., Manhattan as a bad matte) has trained a group of "Grammaticon Clerics" (who have perfected the art of "gunkata") to wander around killing anybody reading Yeats, and these cops are flanked by a retinue of those jack-booted villains from Michael Jackson's long-form "Smooth Criminal" video.

Cleric Preston (Bale) is the best of the best of these remorseless Republican automatons, venturing often into the "Nethers" to kill the literate and the sensitive minding their own business outside city limits--missions that give lie to the intent of suppressing feelings: to end conflict. Ah, the irony flies thick and fast now as Cleric Preston, this greatest of Libria's (irony!) judge/executioners (Judge Dredd), misses an injection of emotion-suppressor and loses his wife (THX-1138), then suddenly decides that he likes Mother Goose and Beethoven.

Saying that all of the performances in Equilibrium are fatuous and inane is moot--better to note that Emily Watson (howlingly awful as a doomed love interest), between this, Red Dragon, and Punch-Drunk Love is now one-for-three for 2002; that Christian Bale is starting to remind me a little of the lost promise of Gary Oldman; and that dimwitted films that use poetry as a means toward sublimity (Red Dragon and Blake, Blue Car and Rilke, Equilibrium and Yeats) would probably be better served to leave the pretension to those able to carry it off. Rotting on the shelf for over a year, Equilibrium has the moxie to use a puppy to facilitate a key change, an evil Damien-kid as a central conflict, and a series of disturbingly fey faux-martial arts as its centrepiece action sequences. Although there is no reason you'd see this in the theatre (unless you're some kind of sicko or film critic or something), should you find it on TNT late night next month, give it a few minutes--it's the funniest American comedy since Graffiti Bridge. Originally published: December 6, 2002.

But I must confess to enjoying it's actions scenes and finding them well shot, crisply edited and stylishly choreographed.

Yes, "Gun Kata" ranks on the same level as "bending the bullet" for sheer preposterousness, but they're a welcome respite from the rest of the movie's ponderous attempts at gravity and Bale's lachrymose moping.