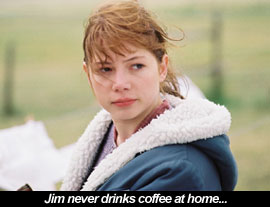 by Walter Chaw SPOILER WARNING IN EFFECT. Ang Lee talks about Brokeback Mountain like it's a break that he needed after the pressure-cooker of Hulk, and the way that the film slinks around the topics that have garnered it its share of awards-season attention suggests that the director of The Ice Storm was well and truly on vacation. It's the most polite depiction of homosexuality you can imagine while still featuring passionate kisses and simulated doggy-style penetration; most of the ways that Lee chooses to illustrate his star-crossed lovers' isolation in the middle of the most closeted American genre are parsed from sub-par situation-comedy scenarios. I like when Jack (Jake Gyllenhaal) sees his lover Ennis (Heath Ledger) for the first time in years and the two lock in a passionate embrace, mainly because by the revving-up of Gustavo Santaolalla's score and the look on Ennis's wife Alma's (Michelle Williams) face, it means we're about to get one of those hilarious scenes where the girlfriend walks in on something she wasn't supposed to see. It's a moment unworthy of the picture, just like another where Ennis flips Alma over during sex to simulate his stolen time with Jack, or when Alma chooses Thanksgiving dinner with Ennis, their kids, and her new husband to accuse him, histrionically, of indulging in gay love. I can't think of one good reason for Alma being made the straight man in an old gag, the victim humiliated, and the hysterical representative of society at large except that even at close to two-and-a-half hours, the film is so under-populated that Alma must serve triple duty to Jack and Ennis's shorthand romance. It speaks to Williams's burgeoning talent that she wears the burden well.

Ennis and Jack meet as sheep herders at the titular mountain, and because there isn't a person going to this film who doesn't know that it's a "gay cowboy movie," every pose and gesture from here until their consummation is laden with lascivious subtext and Marlboro Man po-mo irony. When passion erupts, though, it does manage to come as a surprise--and for a while, it's fair to wonder from the violence of the act whether it's completely consensual. But, of course, it is. Once that idyllic season comes to an end, Ennis and Jack go their separate ways, marry (Jack gets hitched to a rodeo gal, Lureen (Anne Hathaway)), start families, and then initiate an annual fishing trip tradition whereby Jack drives up to Wyoming and the two camp out for a couple of weeks talking about what might have been if only the world were different, if only Ennis were brave enough to put his trust in love. Sure enough, Ennis--and, more to the point, Heath Ledger's extraordinary performance--becomes the focus of the film as well as its only touchstone after Lee shows himself to have suddenly lost the ability to transition from scene to scene both literally and emotionally (following a healthy beating shot in such a way as to suggest that Ennis is a goner, the film jump cuts to Ennis wearing nothing more than a band-aid and a grimace). Spanning a couple of decades in the two men's lives, the entire film reduces down to isolated snapshots and repetitive set-ups (the one bad Thanksgiving with Ennis balanced later with a bad Thanksgiving for Jack (he tells off his macho father-in-law in another sitcom rimshot, equally out of nowhere)), while the only moment of real pathos after the time actually spent on Brokeback Mountain comes when Ennis visits Jack's parents after his predictable death-by-Intolerance.

Hailed as a landmark of mainstream tolerance (and to the "mainstream"'s shame, that's exactly what it is), Brokeback Mountain feels more like an antiseptic gimmick that attempts to hijack the conventions of a traditionally-masculinized genre (despite Red River and Johnny Guitar and The Hired Hand) to further demonstrate, as if further demonstration were needed, that two men in love is as natural, tempestuous, and ineffable as heterosexuality. The obstacles thrown their way are hazarded at but ultimately poorly-drawn--in fact, there are arguably more opportunities for Jack and Ennis to have gay relationships than there are scenes of hate and bigotry. Kudos, I guess, for presenting homosexual characters neither mincing nor particularly good at dressing and decorating, though one does get a little tired of the single-dimensions in which the female satellites and their problems are sketched. I feel like the problem is that Lee's passion for this project is several degrees cooler than his cast's--like he's looking for a place to stretch out and relax (as indicated by the sloppy editing and laggard pacing) while everyone else is painting in swaths of passion, desperation, and regret. Ledger and Williams are amazing, however, and the four main players bring enough to the table between them to suggest what the film might have been--and to make Brokeback Mountain worth the look, anyway. Originally published: December 9, 2005.