And the Geeks Shall Inherit the Earth: FFC Interviews Paul Feig 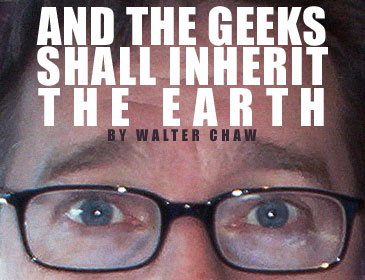 December 14, 2003|Sitting conspicuously on a prominent LoDo street corner, Denver's Nuevo-Mexican restaurant Tamayo is the epitome of hip--so while I was thrilled to be meeting Paul Feig, co-creator of television's "Freaks and Geeks" and "Undeclared", the eatery seemed a little incongruous a setting for a man who's made his mark as champion of the sensitive uncool. Natty in suit and tie and fresh from an introduction (to a group of high-schoolers, natch) of his new film I Am David, Feig impresses with an open intelligence, an engaging charisma, and what appears to be a genuine appreciation for where he is in his career and life. The author of the heartbreaking/hilarious Kick Me: Adventures in Adolescence, Feig is one of our most vital chroniclers of the heartache of youth and the angst of being intelligent in an anti-intellectual world. He stands with the bright lights of the American letter, folks such as Sarah Vowell, Dave Eggers, and David Sedaris, in defining a new collective voice in our popular discourse. The of-the-moment setting didn't seem as incongruous after meeting the wise, funny, and engaging Feig.

FILM FREAK CENTRAL: We're big fans of "Freaks and Geeks."
PAUL FEIG: Thanks, thanks, it was kind of a reaction--everything I do is kind of reactionary anyway. (laughs) I see stuff I don't like and figure I'll do it a way that I can identify with, and none of the high school shows, or movies about high school kids... Even if I liked them I always felt like they had nothing to do with anyone that I knew or any experiences that I had. There's this preoccupation with jock culture, people getting laid, y'know, which goes on certainly but not in my nerdy little circle. So I wanted to do a show about my past, my friends, the burnouts and the outsiders. I happened to be out on the road, I'd made this really low-budget $30,000 feature called Life Sold Separately back in 1997, so I was out on this college tour with it, and wrote a spec script in about two weeks.

Judd Apatow came on board at this point?
Right, right, my friend Judd had a deal at DreamWorks and he'd seen my film and told me that if I ever had an idea for television to let him know. An offer like that from a guy who already has a deal, you know, you really don't want to blow it--in fact the instant temptation is that you want to empty out your idea drawer full of all these shitty old scripts, but I waited and the idea for "Freaks and Geeks" came along and I knew that Judd would dig it.

I read that it was a pretty fast development period.
Yeah, it was, right from the start. Judd called me back after twelve hours to tell me that he wanted to do it, to sell it to DreamWorks. They bought it, turned around and sold it to NBC right at the end of their development period in January, which is way, way too late to pitch a show, but they'd been looking for a high school show and this was exactly what they wanted. We got greenlit immediately.

It's amazing the cast that you assembled for how little time you had.
That's the other funny thing. My whole deal was that it had to be cast with real kids, no supermodel types in taped glasses and baggy clothes, so we went into the first meeting with NBC with that requirement, really ready to dig our heels in, and the first thing they say is "we agree." (laughs) So then we were able to go on a big talent search in Vancouver, New York, Chicago--general word to casting directors all across the country. We found a third of the kids in L.A., a third here, a third there--I had a real preconceived notion of how I wanted these kids to look.

Because they were based on characters from your own childhood?
Exactly--either kids I knew or amalgamations of kids I knew. Some, like Martin Starr [who played Bill], were the exact physical type that I wanted: tall, a little slow. But like Samm Levine [who played Neal] was completely different than I had written for him. What it is to be really good at casting, I found, was to have an open mind--I mean, you have a kid like Samm come in and offer to do an impersonation of William Shatner, you can't plan for that and you rule that out at your own peril. It was tougher than I thought, though, I confess. Being an actor, I resolved at the beginning to have this attitude of every kid would have their chance, but at cattle calls with five hundred kids a shot, after twenty kids you sort of say, "Okay, time to weed this down a little, these kids are awful."

Here you are in Denver, about thirty minutes from Littleton--I know that Columbine happened during filming of the pilot episode. Can you tell me about that period?
Definitely--that was the irony of it that we were making this show about kids ostracized and pushed to the margins right when that tragedy happened. They almost pulled the show because the words "freaks" and "geeks" were suddenly considered hot button but we had a good ally at the studio, Scott Sasso, who really stood up for us. (Feig takes a deep breath.) I'm very sensitive to that. Clearly no one condones violence, but I do think the culture of high school, in a time when your emotions run so incredibly high, mood-swing central, and things that wouldn't be so much to someone older are devastating for you then are a potential breeding ground for things like that. I have a big problem with that kind of persecution that goes on in high school--if you're not that person, I think you tend not to completely comprehend what that's like to live in a constant state of fear and humiliation.

It's epidemic.
Absolutely, and I kind of thought that in the past decade or so with that self-esteem mantra being taught, that maybe bullies would be phased out but you see now that it's just the opposite.

The institutionalization of self-esteem is probably the single greatest American malady.
I agree, the downside of self-esteem is that it builds ego into superego. I remember my nephews a couple of years ago, six or seven, at T-ball--kids would get up there with clearly no sports prowess--and I say that as one of them--and people would be saying, "Yeah, great! Great," and that's not a great lesson because he's not good at that, but there are a hundred things he could be great at instead. The rewards for doing something that you're good at, you know, and the disappointment when you find out at some point that you've been sold this lie, that's just unnecessary.

You recall after Columbine the administration invited "alternative" children to finish out their time in high school at home with tutors.
Exactly, why not further alienate kids who are already alienated? You question the extent to which our cultural institutions create the problems and then, afterwards, look for extraneous rationalizations in a black coat or German music.

What was the reaction to "Freaks and Geeks" from what you'd call the jock culture?
Not much because I find that even the bold and the beautiful, a lot of them saw themselves as victims, too. I'd have beautiful women come up to me and say how much the show meant to her and how she identified with the show and I'd be sort of dumbfounded. I understood a little that popularity brings with it a comparative pressure to stay that way, to conform to a certain standard. You start to realize, and this sounds like a platitude, that we're all outsiders because in a sense we're all "inside."

The comparison that Bowling for Columbine walks towards but ultimately fails to draw is between high school and all of these United States.
Definitely. I'm working on this article for the NEW YORK TIMES called "Perpetual High School" of how life is literally, the way the Bush administration is set up, the jock mentality setting you back in high school, surrounded by bullies, and shouted down. People listening to you because of who your dad is and when you're caught in a corner, falling back on the religion and screed of the moral manifest majority. That religious posturing is truly frightening. The original name for "Iraqi Freedom" was "Infinite Justice," you know--I mean, why not "Kill Allah?"

(laughs) You're developing something for HBO?
I am, and another pilot for NBC, so I'm sort of in the thick of all that. TV, though, really isn't my passion, I really love the movies--when we did "Freaks and Geeks", I really wanted every episode to be like a little movie. We did eighteen episodes and I'll tell you the truth, the thing about television is that it just moves too fast--when we reached the end of our run there was a moment to be honest where I felt like, "Thank God." Judd and I, we were writing on the weekends, we'd have three in production, two on the way, and I think that TV gets to be so lame so often is that people get fatigue. We'd have to be on the set all day for quality control, fighting for this, changing that, we wanted to be really hands-on but the fallout from that is that you really sacrifice your personal life and, on a real basic level, sleep.

Is the HBO show another high school program?
No, no, it's twentysomething geeks--it's called "Nice Guys" and it's basically an "I want a girlfriend, I want a wife" sort of thing with guys who are sort of befuddled about the whole process. I think we've all been there before. 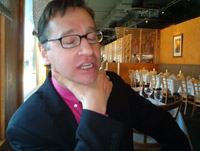