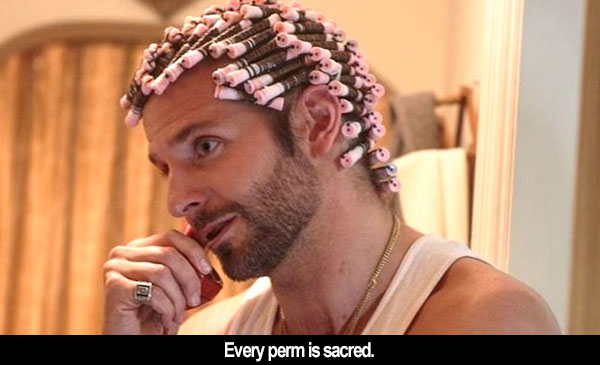 by Angelo Muredda "The world is extremely grey," a con artist intones in American Hustle, which for all its ineffectual stabs at ambivalence is a curiously prescriptive heist movie, the kind that constantly updates its ledger about who deserves what in the end, in case someone should go unrewarded. It's hard to say when David O. Russell--a formerly prickly sort so effectively housebroken in recent years that he's now on the fast track to Academy Award nominations four through five--became so square as to depend on this sort of moral calculus for his dramatic fulfillment: Its equally big-picture pronouncements aside, I ♥ Huckabees seems an odd way station between the redemptive U2-scored montage that closes Three Kings and the brotherly hug of The Fighter, as well as a far more pugilistic film than the one about boxing. Whatever the genesis of his newfound softness (which Russell has insisted is the mark of his maturity as an artist), it's never been as out of synch with either his manic sensibility or his aesthetic of distended, freewheeling set-pieces and outsized actorly emoting as it is here.

If Silver Linings Playbook could charitably be described as Jerry Maguire with fistfights,  American Hustle will have to settle for being a conspicuously high-minded riff on Soderbergh's Ocean's Eleven, a tongue-clucking dramedy too eager to explain that, however much fun the vicarious experience of a caper might be, grifting compromises the self. Loosely based on the FBI's infamous Abscam sting operation in the late 1970s, the film follows the exploits of Irving Rosenfeld (Christian Bale), an elaborately-combed-over dry-cleaning impresario who, as we learn from the awfully familiar first bit of voiceover, is to con artistry what a young Henry Hill was to gangsters. Behind Rosenfeld's storefront lies a more lucrative, if dicier, business, a bad loan scheme that puts off his new mistress and soulmate (more on the old one soon) Sydney Prosser (Amy Adams) until, in a moment of none-too-convincing reinvention, she rechristens herself the British lady Edith Greensley and goes full partner. All's well 'til the Gatsby-aspiring couple is taken in by faux mark Richie DiMaso (Bradley Cooper), a poodle-permed Fed pipsqueak who recruits them to entrap sweet but mobbed-up New Jersey mayor Carmine Polito (Jeremy Renner) and all his politically-connected friends.

Although there's material enough here for a fleet caper comedy, Russell and screenplay originator Eric Warren Singer seem more enamoured with the zeitgeist potential of their story--hence the overreaching title--than with the inherently interesting dynamics of a scheme that pit a lowly ethnic schmuck against a gallery of Ivy-polished WASP senators and congressmen with a taste for bribes. That's an odd and not especially fruitful decision for an idiosyncratic filmmaker like Russell, whose camera careens wildly around his actors while they stammer, hiss, stomp, and shout their way towards epiphanies. Russell's method of letting his cast find their characters in loosey-goosey long takes as they roam up and down halls and bounce off each other like pinballs is frankly at odds with the overdetermined text. No one suffers for that schism more than Adams, whose class-transcending former COSMO intern has the doubly bad luck of playing decorative wallpaper in the cons themselves--a coatrack for a zealous period costume designer--and expository thread-puller in her narration and dialogue: "These were the roles we were meant to play," her Sydney reminds us during the couple's long con on both Polito and DiMaso. "You're nothing to me," she warns Rosenfeld, "until you're everything." And so on.

Desperate to pull its own thematic weight, American Hustle, in its homestretch, recruits the impossibly likable Jennifer Lawrence, she of the face-planting podium-climb to Oscar, as Rosenfeld's estranged Jersey housewife, an authenticity-granting deus ex machina meant to scream "Real!" amidst a cast of gilded fakes. This is the second time in as many years that Russell has cast Lawrence as a salt-of-the-earth neurotic--"The Picasso of passive-aggressive karate," Rosenfeld calls her, in case we don't pick up on her uniqueness--and as game as she is, she doesn't quite have the chops to play the Jeannie Berlin-meets-Jessica Rabbit part he's cooked up for her. Lawrence does her best with a ludicrous monologue about her nail polish, whose faintly rotten under-scent apparently brings all the boys to the yard, but there's no disguising its transparency as yet another ham-fisted articulation of the uneasy proximity between the real and the fake. American Hustle, then, isn't a sophisticated portrait of a morally complex world, but rather a black-and-white paean to the concept of greyness by an artist who's effectively purged its shades from his wardrobe.

The "Michael Clayton" of 2013. Every conversation thuds with weighty significance that it hasn't earned.