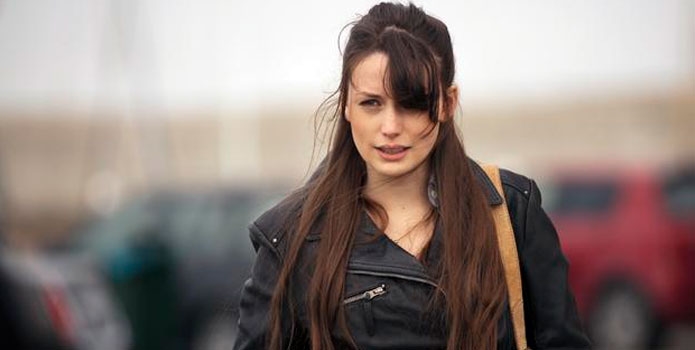 by Walter Chaw Its title maybe referring to the audience, Paul Verhoeven's newest is a pain-in-the-ass gimmick piece done by a filmmaker I used to really admire and maybe don't so much anymore. The first third is dedicated to a built-in, manic "making-of" featurette that essays, in deadly, deadening detail, how Verhoeven posted four pages of a script online, then invited anybody with a laptop and a Starbucks to submit the next five pages, and the next, and so on and so forth, thus pushing Verhoeven out of his comfort zone and inspiring him to new heights as a filmmaker. As is always the case with Verhoeven, it's very likely that this whole project is some elaborate satire of exactly how stupid we are. His RoboCop, Starship Troopers, Basic Instinct, Total Recall, and Showgirls have each enjoyed long, healthy second lives as critical darlings; in his way, he's the Douglas Sirk of the late-'80s/early-'90s: dismissed in the moment, but appreciated through the perspective afforded by time. I'm a fan. Enough so that I want to believe the prototypical mad-director persona Verhoeven inhabits in this thing is a piss on self-important meta stuff like The Five Obstructions. (Honestly, just the jaunty "fuck you" score suggests that Verhoeven is fully aware of the game he's playing here.) As for the short film that occupies the latter 50 minutes or so, it's a tale of corporate intrigue featuring unknown but game actors, playing out a sexual blackmail that feels more the lark for the context provided by the attendant documentary. Indeed, it's impossible to see the two halves as independent entities, however unintentionally, and as such, the product of the experiment lands as Verhoeven's most conventional film...ever. It's an example of the fallibility of giving people what they think they want and indulging what they think they understand. That doesn't make it better, though it does suddenly make it make sense.