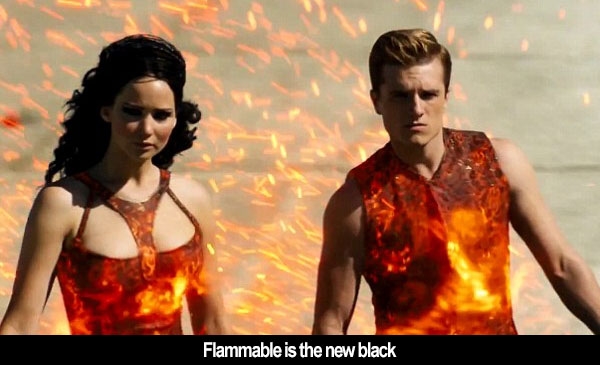 by Walter Chaw Portentous, eagerly-anticipated, ending on an abrupt cliffhanger aboard a spaceship... Yes I'm talking about The Matrix Reloaded--I mean, The Hunger Games: Catching Fire (hereafter Catching Fire), which for all the conceptual visual improvements inherent in moving from The Hunger Games director Gary Ross to director Francis Lawrence for this instalment, still suffers from hilarible, unspeakable dialogue and a scenario seldom honoured by the execution. Those who haven't read the books (myself included), fair warning that you'll not be able to follow a moment of this one without revisiting the first film--again like The Matrix Reloaded. From what I could glean based on the fragments of The Hunger Games I haven't blocked out is that this girl, Katniss (Jennifer Lawrence, earnestly dreadful), has won a televised deathmatch sponsored by a monolithic government to keep control of twelve impoverished, racially- and class-coded districts. I get it, it's a metaphor and, um, a satire of some sort.

Katniss not only won, she saved the life of non-descript milquetoast Peeta (Josh Hutcherson) for the ethical treatment of animals, get it? Comedy gold. She saved Peeta by pretending to be in love with him, a charade that really pisses off real sorta-boyfriend Gale (Liam Hemsworth), who, in a cosmic bit of cinematic bad timing, occurring as it does so close to the anointing of 12 Years a Slave, gets whipped while tied to a post then tended to by firelight with rags wet by snow. Yeah, it's terrible. Anyway, in this breathless episode, Katniss and Peeta are redrafted into the Hunger Games, this time in conflict with previous winners of the Hunger Games--sort of an "All-Star Survivor", the difference being that for as little as the original dealt with Katniss's survival skills, this one deals with them even less.

Katniss is a hero, though she doesn't do anything very heroic--she's essentially rewarded for being a symbolic object both sides (the haves and have-nots) do their best to exploit. She's not clever and she's emotional, fulfilling in that way the worst stereotypes of women in action film. There's a lot of crying, not a lot of surviving; that she stays alive is due to the constant intervention of others who, at least this time around, aren't noble black people...well, except for that one old guy who makes some kind of defiant gesture in honour of Katniss announcing that she really misses the little black girl who sacrificed herself for her in the original. Oh, and except for her fashion designer, Lenny Kravitz. Oh, and... Best not to go there, as it's not like Catching Fire, which tosses around words like "revolution" in the same way that college freshmen hang Che Guevara posters on their dorm-room wall, has anything on its mind. Katniss loves Gale, no she loves Peeta, no Gale, no Peeta, and nothing happens in the long first two-thirds of the film other than a lot of talking, a fashion show, and a parade. Truly, it's like a game of imagination played by two young girls. The eventual fighting and killing is less unsavoury in this go-round since it's not children, it's twenty-somethings and one old lady who kills herself because it's best not to become a burden to the young in one's dotage.

At the end of the day, there's not much point in talking philosophy about a film that banks on fan devotion and a few pretty pictures. Measuring out tween chill moments in regular intervals like hamster pellets from a timed feeder, Catching Fire is arty, self-serious tentpole garbage featuring a truly depressing number of great actors (Donald Sutherland, Woody Harrelson, Stanley Tucci, Amanda Plummer (!), Toby Jones, Jeffrey Wright, Philip Seymour Hoffman) doing shtick for a cut of the back end in a movie that isn't aided by their presence in the slightest. Poor Plummer, in particular, gets typecast as the loony bird, with the bulk of her screentime spent giggling like Regan after she kills the exorcist and saying shit like "tick-tock" on an endless loop. (It does bother me that character development is left to pastiche and a presumption of familiarity with the source material.) Then there's Jena Malone as crazy Johanna, still doing whatever it was Malone was doing in Sucker Punch while somehow managing to offer up the only thing that seems like honest vitality in a picture full to bursting with the fake kind. Catching Fire is bad. It'll make the money it will make, earn no new converts to the flock, and be the type of movie you hope no one ever brings up in polite company because you don't want to look like an asshole. As with the Twilight series, when the last one screens for press, I'll probably be sick that day.

This is just a bad boring movie. With awkward lines and some bad acting.

Character and plot development are almost non-existent. The scene when they are crawling through the water to get the sores off their skin (from the fog). Horrible and cringe worth acting.

The argument that we should have all read the book, is irrelevant. A well made film should be able to successfully transfer the text to screen. Not merely be visual eye candy for those who have read the novel. If there is good character development in the novel (as everyone claims) then it should also be done in the film. period.

was bored and tired in the movie.