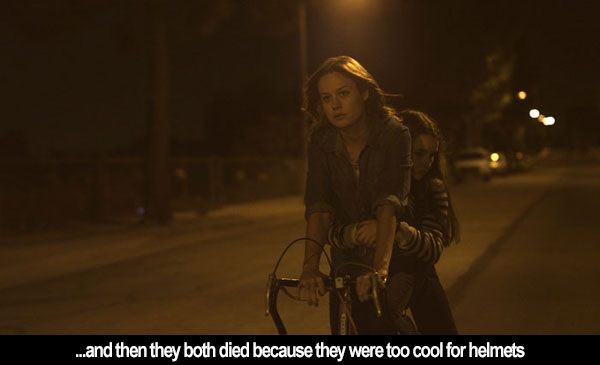 by Angelo Muredda Of all the specious arguments thrown around during awards season, the most enervating may be the contention, popular among early champions of films that are near-universally acclaimed on the festival circuit, that the first negative reactions to said films are simply backlash. Backlash, the logic goes, is a latecomer's insincere negative reaction to a title he or she did not have the opportunity to praise when it was still hip to do so--lateness presumably being the only reason a person might have problems with a critical darling. Let it be said, then, that while I could not shake my own feelings of belatedness while recently watching Destin Cretton's routine Short Term 12, which came out of festivals as diverse as SXSW and Locarno relatively unscathed, my response owes less to my unseasonable viewing conditions than to the film's own curious belatedness, its tendency to rehash old-fashioned 1950s moralism about family-planning and Dangerous Minds-derivative solemnity about underprivileged teens in a faux-authentic new package.

Brie Larson stars as Grace, a supervisor at a transitional foster-care institution for at-risk teens, working alongside her professional and romantic partner Mason (John Gallagher Jr.). Grace is a tough but doting mother hen to charges like Marcus (Keith Stanfield), a troubled but sensitive rapper who's on the verge of aging out of the system, and new import Jaden (Kaitlyn Dever), a surly young girl who communicates her pain only through allegorical children's stories and drawings. It's a routine job, as we see from the too-cutely mirrored opening and closing scenes, though a couple of foreign elements tilt things on their side--first, the arrival of obvious audience surrogate and green facility worker Nate (The Master's Rami Malek), but more importantly, Jaden's family baggage, which sends Grace back to her own troubled teen years.

Larson snagged the Best Actress award at Locarno for her performance, the one thing here that lands with any consistency. It takes not just acting chops but presence too to play a suffering saint like Grace as a real person, and Larson certainly has it, delivering sage pronouncements like her tip that Nate "lose the tie" on his first day with more nuance than the script probably deserves. Her work is particularly impressive given the over-the-top exposition we get about her character's motivations, doled out as conspicuously and clumsily as the Khan reveal in Star Trek Into Darkness. It isn't enough that Grace can put herself in these teens' shoes, Cretton tells us in increasingly desperate fashion: she must also have literally gone through each of the same traumas they have, that they might ultimately work through them together and emerge triumphantly on the other side of mental health while clasping hands. (It's telling, in this regard, that Marcus is absent from the movie's climax and reduced to a redemptive postscript, as if the realities of racial prejudice and housing projects are beyond Grace's imagination.) Grace's history of abuse isn't so much unbelievable--Larson's abrupt shutdown in one intimate moment is more convincing than all the fill-in-the-blanks backstory that follows it--as it is instrumentalized, made to serve an overly neat story about confronting one's past head-on, in this case with a baseball bat.

Cretton's method is to oscillate between this melodramatic, pathos-saturated register and something closer to naturalism, as in the studied nonchalance of an opening montage that finds the kids in the facility going through their mundane routines, not unlike an observational documentary. Sometimes this tension serves him well: When we watch Marcus rap his heart out to Mason, his face filling the frame as he repeatedly calls for us to "look into my eyes," we're moved by the self-disclosure, even as we're aware of how constructed it is. But Cretton lacks the finesse as a storyteller needed to make his script's mawkish developments register as anything more than excess affective baggage. There's no accounting for the most grievous of these sins, a sentimental B-plot about a woman's consternation over whether to go through with an abortion, which concludes with the baffling suggestion that all a woman needs to make the (right) choice is a little bit of self-administered therapy and a good look at her ultrasound. Whatever its ostensible sympathy towards the wayward kids under Grace's care, Short Term 12 is a surprisingly conservative film, not nearly as progressive as it seems to think it is.