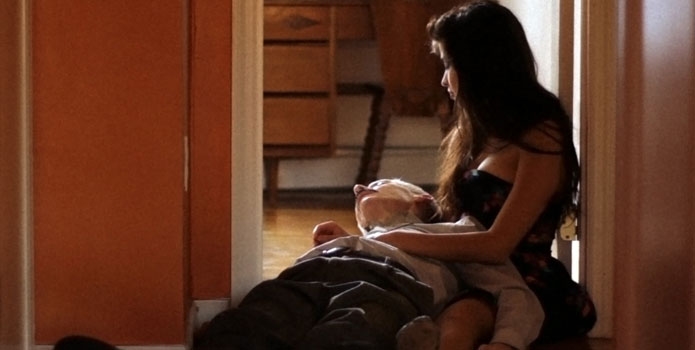 by Walter Chaw Nathan Silver's second film in less than two years (he reports he now has four in the can) is the surprisingly affecting Soft in the Head, which works as a detailed study of lives of loud desperation. Natalia (Sheila Etxeberria) is a drunk, makes bad object choices, and is an all-around loser who also has the misfortune of being really pretty, making her the target of just about everyone she comes in contact with. Exteberria, the sister of an ex-roommate of Silver's, is a true find, as is Ed Ryan as kind, mild Maury, who walks the streets in search of lost souls to invite to bunk with him in his little apartment. Shades of Viridiana, and for all of Silver's protestations to the contrary, there's a certain formalism in his satire that gives an arc to what was, by his report, an almost-completely improvised, looser-than-loose adaptation of Dostoevsky's The Idiot, with only the character of poor, saintly, benighted Prince Myshkin remaining somewhat intact in Maury. Soft in the Head is saved from pretension, though, by the complete naturalism of the performances. Exteberria astounds for her unself-consciousness as a character irredeemable, defined by her lack of impulse control and horrific decisions. A friend, Hannah (Melanie J. Scheiner), provides the film its foil while Hannah's autistic brother Nathan (Carl Kranz) has a pivotal moment where he speaks directly to Natalia's essential problem as an insufficient object of desire. The last moments between Natalia and Maury are touching, and the final scene, where I swear I see Maury moving his hand on her thigh, speaks to puzzles, deep, in how there may be no such thing as holy saints invested in pure altruism. The only thing worse than a world with Myshkins, after all, is a world without them.