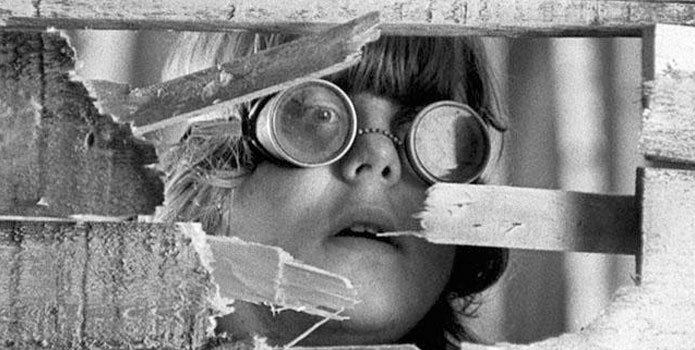 ½*/****
written and directed by Aaron Schimberg

by Walter Chaw Okay, I'm gonna take a stab at this one. Aaron Schimberg's aggressively pretentious Go Down Death is an attempt to speak to the idea that communal storytelling is the key way in which humans communicate culture. Ostensibly based on a lost folklorist's collected works, it acts like a Guy Maddin, looks like early Jim Jarmusch, and really doesn't work at all, because if the film is a variation on a theme, it's a riff that goes on way, way too long. I spent an evening once watching mushroom prints, stained directly onto film negative, by Stan Brakhage. The idea is interesting--a lot more interesting than the execution. It's more interesting that he thought of it and made it, in other words, than it is to endure it. I feel this way about most experimental cinema; I feel this way about experimental jazz, too. It's all perilously close to clever, highly-intellectualized masturbation. After a while, one begins to wonder if it's even still engaging to the person jerking off. Go Down Death does a nice job with its black-and-white, wilfully-grainy cinematography, which creates a convincing carnival/period feeling. Unfortunately, the dialogue is so impossible to deliver, and in the mouths of friends and family who need a lot more help than this. What remains is a film that can't quite get its fingers to close on valuable subtext or meaningful philosophy. Ending with an anachronistic jump to a neo-Pinter, kinda-Woody Allen modern-dinner-party epilogue that underscores the equation of cinema with the vessel of new tribal mythology, it's, you know...I get it, I get it, and I wish this were a short instead of a feature.