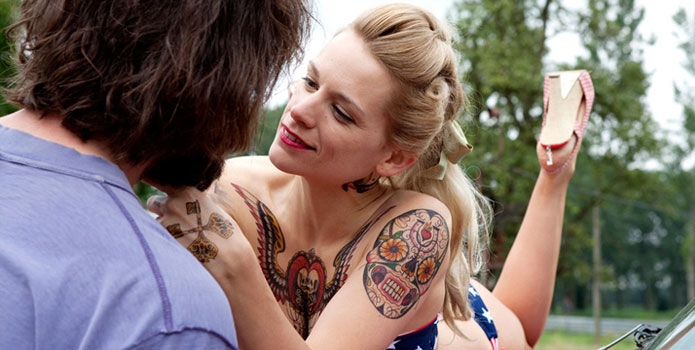 by Walter Chaw Felix Van Groeningen's The Broken Circle Breakdown eventually loses impetus and becomes political theatre, but until it does it's exceptional melodrama, raw and emotional. It walks the fine line for a while, staying just this side of exploitation in its alinear tale of a little girl who gets cancer and her parents--how they met, the aftermath, and then the far aftermath. The film's central event, then, isn't the child's fate, but rather the meet-cute of the parents, with squarish Didier (Johan Heldenbergh) asking about Elise's (Veerle Baetens) tattoos in the parlour where she works. A bit shocked, and maybe titillated, that each has a story of a different man attached to it, he invites her to, essentially, come see him perform with his bluegrass band in a tiny club down the way. Van Groeningen, working from an original idea and stage play by Heldenbergh, adroitly alternates the events of the film with Didier's band's songs; in other words, The Broken Circle Breakdown owes a greater kinship to Cabaret than to Once--even though, at its best, its intent leans more towards the personal than the political. This means, of course, that once it becomes more political than personal, it also loses its rudder and balance. Already, effortlessly, about so much, it stumbles badly when it tries to be.

But before Didier rails at a televised image of George W. cutting funding for stem cell research for religious reasons--before, really, Van Groeningen shows an image of the WTC about to crumble on a TV screen behind a happier domestic foreground, The Broken Circle Breakdown is sublime. I can honestly say I haven't cried harder in any film in at least fifteen years. It deals with new love and the death of a child unapologetically. It reminded me in all the best ways of Susan Bier's dogme95 entry Open Hearts, especially that one moment when a lover, paralyzed in an accident, dreams that he can still reach across the space between two beds to touch his partner. It also, in a certain Flemish lack of embarrassment, reminds of the American '70s, in particular Don't Look Now--if only in love scenes that are real, sexy, and grounded in relational dynamics.

So it's all the more disappointing that The Broken Circle Breakdown's last hour is involved in titular breakdowns, pulpit-pounding on either side, and a suicide attempt that just doesn't provide the same kind of glue as the little girl's illness. It's much better navigating the intricacies of relationships than the finer points of religion and politics. Maybe it's because the film addresses them the same way it addresses its emotions: in big, sloppy gestures. Worse, as the second half is essentially a mirror image of the first, the film's structural novelty is lost and, finding ourselves no longer off-guard or surprised, it begins to feel redundant. Saving it as best they can are (cast-performed) musical performances that consistently do a wonderful job of counterpointing the story, offering insights along the way that music is narrative and salvation, outrage and perspectives of eternity. Telling that a moment where Didier interrupts one of the performances is also when the picture confirms it's not merely lost its way, but betrayed its own core as well. Still, though not perfect by a long shot, there's truth and beauty in The Broken Circle Breakdown's messiness, enough that it's almost enough.

In addition to playing at the Starz Denver International Film Festival, The Broken Circle Breakdown begins its exclusive Toronto engagement at the TIFF Bell Lightbox on November 8.