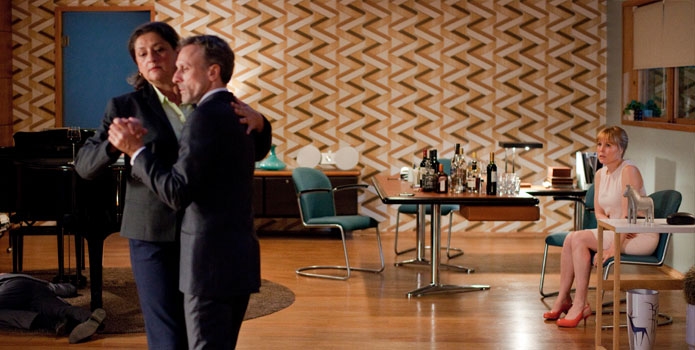 by Walter Chaw Screening at the SDFF and now travelling with the Alamo Fantastic Fest, Alex van Warmerdam's Borgman gets the Yorgos Lanthimos Award for Most Devastating Absurdist Metaphor for Familial Dysfunction. Smart as hell and unapologetically surreal, its central motivating image is a tableaux vivant of Henry Fuseli's "The Nightmare," tipping off not just the ethos of the film, but also that there may be running threads concerning mothers (Fuseli was Mary Wollstonecraft's lover), monsters (Mary being the mother of Mary "Frankenstein" Shelley), the empowerment of women (the mother again), nightmares, of course, and maybe Romanticism, if only in the picture's awareness and perversion of nature. Demanding a specific kind of active spectatorship, Borgman is a complex film with heat, and somewhere in the middle of it there's a performance within a performance that ends with a declaration of intent that stands as one of the most existentially chilling things in cinema this year.

Borgman asks large questions. It seeks to discover the source of evil in the world, borrowing in one remarkable sequence the most indelible image from Night of the Hunter while riffing on Boudu Saved from Downing. It deals frankly, ingeniously, with Jungian ideas of the subconscious: creatures of the id, trailing civilization behind. The picture opens with a priest on a mission of exorcism, unearthing what appear to be transients dug into the earth. One, the apparent leader (the titular Borgman (Jan Bijvoet)), escapes and insinuates himself with privileged housewife Marina (Hadewych Minis), who, against the wishes and knowledge of her put-upon husband, Richard (Jeroen Perceval), allows Borgman first a bath, then to take up semi-permanent residence in the guest house. Soon, Borgman violates the household, perches on Marina like Fuseli's gremlin as he stirs nightmares in his benefactor, and dispassionately reveals a practiced plan for complete infiltration. When the soldier boyfriend of nanny Isolde (Sara Hjort Ditlevsen) returns to an unfortunate scene, for instance, or when even the children become murderous in sequences that aren't so much shocking as they are absolutely banal and indifferent, it becomes clear that Borgman represents the essential disquiet baying at the gates of every human relationship.

Borgman is a deeply disturbing little flick in that it undermines the family structure by replacing it with changeling things. A film that James Whale would have made given the chance (in that it looks for, and pinions, human frailty), it's about the idea that not only are gods created in the breast of man, but monsters, too. Borgman begins his manifestation once Richard reveals his temper, and the rest of it could be Marina's growing awareness that her husband is dangerous to her and her children, if no more so than any man is dangerous to his family. What works best about the film is that for all its surrealism (my favourite is when two dogs appear, and Borgman admonishes that they're premature and should make themselves scarce), it is immanently recognizable and absolutely universal. In its presentation of our base awareness that there's not much separating us from flesh-rending (and there's a shocking scene of that here), biting, tearing madness, in its thought that we are animals held in tenuous--and temporary--check by the angels of our better natures, Borgman is the best movie of its kind since Kubrick's suddenly unpopular-to-like The Shining. Sue me, I love them both.

THE SHINING is unpopular?!
What the shit?! I suppose chocolate and oxygen will fall of favor next.