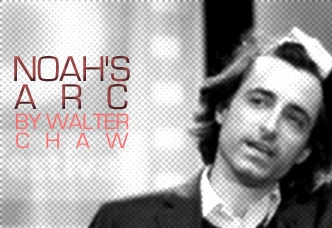 November 6, 2005|The son of author Jonathan Baumbach and former VILLAGE VOICE film critic Georgia Brown, Noah Baumbach is married to Jennifer Jason Leigh and counts among his friends long-time husband and wife Kevin Kline and Phoebe Cates (whose son, Owen, has a pivotal role in Baumbach's new film The Squid and the Whale). I know he wrote and directed a 1995 film called Kicking and Screaming that I liked a great deal, that he co-wrote The Life Aquatic with Steve Zissou with Wes Anderson and that Anderson produced The Squid and the Whale, and that he made another flick (the underestimated Mr. Jealousy) and still another (Highball) he had taken away from him and will no longer discuss. I believed that was all I really needed to know about Mr. Baumbach's personal life--and maybe too much already, besides.

But when people talk to Baumbach about The Squid and the Whale, they zero in on what they perceive to be the autobiographical elements of the picture, and they ask him to share how difficult it must have been to lay his soul so bare. (Invasiveness, I think, in place of insight and masquerading as interest.) I wonder about its autobiographical quality--not because I doubt its essential veracity, exactly, but because I believe that all honest art (and how ambiguous is that ascription?) has in it the quality of the confessional. It's the easy way out of The Squid and the Whale, a way to dodge the manner in which it lays bare the angry nerve endings of family discord and adolescence. I think at the bottom it's a method of avoiding the film itself. It could be, too, that it so nails my own prejudices, so exposes large swaths of my own familial relationships, that I'm less interested in how Baumbach feels naked than I am in how he's made me feel that way.

FILM FREAK CENTRAL: Clarify for me the feeling that one of your characters expresses that although he didn't compose something, he feels like he could have.
NOAH BAUMBACH:Well at different points in my life it's been different people and I--as an adolescent, I sort of had that experience in movies that Walt had with Pink Floyd, this kind of vicarious, sort of collaborative feeling in that listening or watching became sort of a work in progress: a journey you were taking along with an artist to create something new. When I was younger it was something like The Jerk and then later, Woody Allen things like Purple Rose of Cairo and then things like The Road Warrior. It's not that I wanted to claim those movies, or make movies like them one day, but that there's this time when you're an adolescent where you feel more linked [and] can kind of in your mind participate in things you watch or listen to.

And now?
Now I just want to be true to myself. It sounds trite, but there's truth in that for me.

It seems like talking about this film, it's opened you up to a lot of invasive questions--had you anticipated that?
That's a really good question. The answer is "no." (laughs) No, I mean, I sort of hit the ground running at Sundance with all these reporters saying with a lot of authority, "Well, this is clearly autobiographical," and then taking these fictional things from the movie and using them as a basis to ask a personal question about my childhood or my family. It put me in a very difficult position of looking like I was being evasive when I said, "Um, no, that's just something that's in the movie," and then they'd look at you like they'd caught you on the couch or something. There's no right way to answer a question like that.

Are you more comfortable with that line of questioning now?
No--well, I should say that with more distance, now that I've lived with it a little longer, I at least understand it more because I think I was wilfully naïve about it. I understand that the movie has an open, kind of naked feeling about it and I can accept more that a person seeing it would wonder if it were "real" in regards to my own experience. I would prefer, however, that they just ask their families in a hypothetical way or keep it to themselves, you know, than to put a camera in my face and ask me if my father is an asshole.

Is it a compliment that people see it this way?
It is, I think that it is, but I also it's not something that I can sufficiently answer. It's for the audience to identify with or not, it's not for me to go through with a red pen and say, "Half of this sentence is 'real' and half of it is 'fake'"--it's not useful...

Do you even feel like that would be possible? I mean for you to discern what's "real" from what's "fake"?
Right. Absolutely right. It's all real and it's all fake, I know the substance of what you're asking, but I don't know that you know the trickiness of it.

I like something you said about how The Squid and the Whale is actually an insulation from pain--the film, like the diorama of your title, as a process of repression.
Exactly, I feel protected by the movie. You watch the film and hopefully you have a raw reaction to it and then you might come to me later like so many have done and say, "God, how could you expose yourself like that?" or "Was it painful to make it?" And I say that I'm not exposing myself, this is an invention in every way. It's a film, it's been recreated in every way and, no, it wasn't painful to make it. I had to go through a lot of this stuff in order to make it, but the making itself was not cathartic or therapeutic.

But "protected"--how? By distance? By obfuscation of another kind? And can you pull it together for me with the image of beasts from the deep?
I think this kind of subject matter in film is rare for that reason--that film is immediate and family memoirs are distant. It's so common in literature, there's a "family" book every year it seems like, and so, so many of the films we do get about families are adaptations of books, which is just another layer of disassociation, right? But what I wanted to do was make something that was made as a movie only for, I think, immediacy... Look, I hadn't thought about the "creatures of the deep" idea that you're suggesting--this idea of things that are huge and monstrous and hard to read, but I think that it's a really interesting one to make in conjunction with my process of making this film. It's going back and looking at a painful event, but what I remember is tied up with what I don't remember but surmise, and then with what I think I remember but I don't. It's nice for me to hear you make that analysis because it's important for me not to. To not let that sort of critical deconstruction enter into the writing process.

You didn't plan that Bernard, the Jeff Daniels's character's book is titled "Underwater"?
(laughs) No, seriously, no. I don't remember where that came from, but I had no such thoughts in my head.

With your mother's background, tell me about your relationship to criticism.
I have a great respect for criticism--and not just as this vocation like cobbling or something like so much of it is nowadays, but as an artform. I grew up in that sort of environment, with the critical eye being the way to look at things and in a way I had to, when I started making movies, I had to learn to trust a more emotional way of doing things.

Were you hampered by your upbringing in that way?
I think with the first two movies that's definitely a possibility. I was hampered by a critic's mind, and I think that I was able to shed a lot of that with this movie, though I think that came more from maturity in my writing and just in years, you know, than it comes from a conscious repression of that. I mean, when I go to movies, that critical eye is right there front and centre again. But if anything I have a very high expectation of critics.

Tell me about your embedded references: The Mother and the Whore, The Wild Child, and a lobby card for The Thing tacked to a wall.
(laughs) I love that movie. I had all these things from my childhood, all this stuff and press packets and stuff, I went to a lot of these all-media screenings and you get a stack of paper, as you know, and at that time you'd get hard copies of the poster art and stuff and I saved everything. And when I came across that The Thing card, y'know, a film I loved as a kid and a film that I watched a lot through my fingers--just like Walt and the diorama!--it just struck me as the perfect thing to stick on a little kid's wall. It felt like a good one. Another film about people not being what you think they are, I guess, too--of what's hidden underneath surfacing at the worst possible time. Can I tell you that I didn't mean for The Mother and the Whore to signify as much as it does? It's funny because it's so dead on... I'd written it as Blow-Up in the script but Warner Bros. wanted like three-thousand dollars for the image so we couldn't afford it, but then New Yorker gave us a list of film images we could use and I was like, "Oh, Mother and the Whore." I love that movie and it wasn't until literally I had hung it that I was like, "Uh oh, this is a can of worms."

Are those references--the posters, the Risky Business soundtrack, the Pink Floyd--are those things another form of intellectual remove?
Taste is so much a part of this sort of intellectual existence, you know, the critical life--I bet you have movie posters up in your office? Yeah, it's critical people wired like us to do this sort of insulation, you know, these references that you use to confirm your taste. It's reassuring, I think, but at the same time while I can't say that no thought went into them, I want to reiterate that things like the book title, the soundtrack choices--when you're really in it, if you're in the groove, a lot of these connections, hopefully, just come.

I like the scene when Bernard is being carried off in an ambulance and tries to make a romantic gesture to Joan by quoting a line from Breathless--and how the misunderstanding of that gesture speaks again to the slipperiness of memory, even in film.
That's absolutely right, absolutely right. In a way, too, it's a means for him to elevate his collapse by comparing it to the cinema: sort of the 9/11 reaction of it's just like a movie. It's not enough somehow for him in his own life to be struck down, but he also has to make this sort of grand romantic gesture that he's learned from a film that he thinks marks him as somehow not-a-philistine. And that Joan doesn't know what the hell he's talking about, that she doesn't validate his status by recognizing his reference, makes that belief that film--that art--can ever be a completely effective substitute for the absurdities of life.