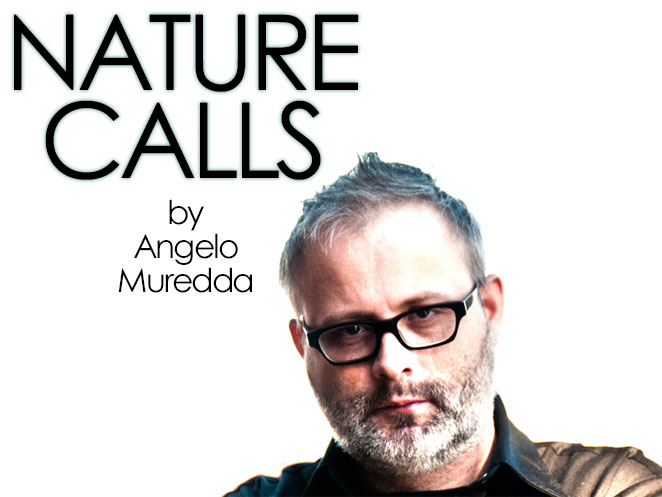 Not long into Denis Côté's equal parts unnerving and affecting Curling, we get a taste of what might charitably be called the social life of its cloistered central characters, stolid dad Jean-François (Emmanuel Bilodeau) and his taciturn daughter Julyvonne (Philomene Bilodeau): When Julyvonne does her chores, her father grants her a rare glimpse of the world beyond their home in the chilly Quebec countryside, courtesy of the living-room stereo. Father and daughter quietly tap their fingers and rock their knees to songs like Tiffany's improbably upbeat “I Think We're Alone Now”--pop hits from a bygone era that, for all the unschooled Julyvonne knows, could be the present. The irony of that reveal, which is perhaps unsurprising to anyone familiar with Côté's filmography, is that Jean-François and Julyvonne have their own, perfectly private lives outside this sheltered world, him through his work as a repairman whose job necessitates roaming into hotels and bowling alleys, her through a number of clandestine trips to the forest that put her in touch with a tiger and its possible prey.

That tension between the drive to hermetically seal off one's world--to board up the windows against the dangers of cities and the unruly people who live in them--and the desire to break out of it, however furtively, is arguably Côté's great theme, broached in sensitive early films like Distant States as well as in last year's Bestiaire, a documentary that trains our eye on the captive, incessantly-observed animals of Hemmingford, Quebec's Parc Safari. It's that same tension that drives the minimalist narrative of his newest, Vic + Flo Saw a Bear (Vic + Flo ont vu un ours) (***½/****), a slow-burning, then bracing psychological thriller about another isolated couple who find their commitment to the ascetic life tested by the outside world.

As in Curling, we soon notice a crack in that resolution. Freshly released from prison, sixtysomething Vic (Pierrette Robitaille) heads back to homestead the place she's left behind, an unkempt sugar shack in the backwoods of Quebec once run by her now uncommunicative and physically disabled uncle, Émile (Georges Molnar), who's been unceremoniously left (by Vic's absentee brother) in the care of the locals. She's soon joined by Flo (Romane Bohringer), her former cellmate and present lover, who's bisexual, considerably younger, and obviously less inclined to the rural, preferring the local bar to the farm and hinting that her stay may not be permanent.

On paper, Vic + Flo Saw a Bear sounds like a romantic melodrama, yet like most of Côté's films, there's an unsettling undercurrent from the first moments that gradually creeps to the surface. We're grounded in this strange Canadian gothic--more Margaret Atwood's horror-tinged interpretation of Susanna Moodie's backwoods adventure than Moodie's own reserved account--by an eerie frontal tableau of Vic interacting with a young bugle boy that recalls the shots of trapped giraffes in Bestiare, and before long the camera is panning through the woods like a stalker or, we think from the title, a bear. Whether the bear ever shows up is beside the point: Everything the women encounter is a threat, from Vic's sweet-faced parole officer Guillaume (Marc-Andre Grondin) to the mysterious Jackie (Marie Brassard), who plays nice with Vic but appears to have an ugly history with Flo. Much as the film's eruption into grisly violence in the astonishing closing act jolts us, then, its late foray into horror is neither a surprise nor a cheat, but rather one of Côté's characteristic genre mutations.

I recently chatted with Côté over e-mail, where our conversation focused as much on his career-long exploration of violence, genre, and minimalism as on Vic + Flo Saw a Bear. 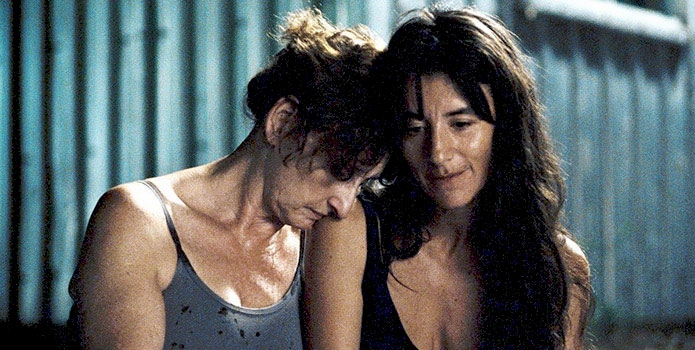 FILM FREAK CENTRAL: Like Curling, this film has what first looks like a tight-knit bond at the centre that increasingly seems in danger of coming apart. Vic and Flo's relationship is intensely co-dependent, but you get the sense that Flo wants Vic to know that she can leave at any time. For one, she's considerably younger than her; she's also bisexual; she's also a more natural city-dweller, and talks about leaving the sugar shack. What's so compelling about watching this sort of closed-off, self-sufficient relationship get tested by the allure of outsiders and travel?
DENIS CÔTÉ: I like to start telling a story at the moment where everything is the status quo, or paralyzed or numbed from every point of view. It means the story has an aim: to dynamite that situation. The situation in Curling is completely understood by all parties and they need to be convinced that something is just wrong. So the story had to find elements to make them realize that it was time to change their relationship or their intimate contract with the world or the community around them. I guess I drank the same water for Vic + Flo. Vic made a conscious (for Vic) choice by wanting to live a bit outside the world. Flo disagrees, so that will be the motor of the story. I'm always touched by people who think the world or society or communities can be avoided. At some point, things come back, either when you have to pay your taxes, or talk to the police, confront a neighbour, visit the hospital, or face an old partner in crime. Basically, Vic + Flo is the story of people thinking they can run their own personal intimate government hidden in the woods. But at some point, the real world comes knocking.

The threat of violence and intrusion never seems too far away in a number of your films, like Drifting States. Here it explodes in a particularly gruesome way. What's interesting to you about violence, either its threat or its realization?
I should definitely admit that I am not really turned on by that violence or the pleasure of filming it. You will think the answer is twisted but I was really looking for some sort of a romantic happy end for Vic and Flo. I thought I'd make them go through a very difficult process in order to make sure they would end up together, happy, forever, in silence and peace, outside of a world they don't recognize and which doesn't really want them. I think there's always a sense of menace in my films. It's in me. I want you to think that something is always about to go terribly wrong at some point. It keeps the viewer aware of his vulnerability as a viewer. Drifting States was a quiet and simple film but still, you felt some sort of anguish or menace. It's good.

There are some striking uncanny details in the film, like the boy scout with the bugle, and Jackie, who can seemingly materialize out of anywhere, taunting that horrible people like her "really do exist." She reminded me of Robert Blake's Mystery Man in Lost Highway: menacing because ordinary, but somehow not of this world. How do you make seemingly ordinary characters like these come across so strangely?
I like your question. Most films we watch contain so many 'functional' scenes or boring transition shots. When a character says he must drive to another town, we usually see him in his car for few seconds and ultimately park that same car in some new town. Then he goes to knock at some door and meet a new character, etc., etc. I'm getting totally allergic to that and I'm thinking of my mise en scène in a very dry and minimal way. The result is characters who seem to 'appear' in landscapes, in a room, on a porch, for example. As viewers, we all know they move: they had to go from point A to point B. But it's all 'fat.' Take that fat out and you will feel what you're asking me in your question. I think it's quite simple to create mystery. The art of playing with space and time can work miracles sometimes, in a very simple way. Jackie lives somewhere, of course. You live somewhere, I live somewhere. But if I never show you, you're free to imagine anything you like. I apply that simple rule to my characters. I'm not into symbols or metaphors. Events and people are real in Vic + Flo, but making you think they are apparitions or dreams can work on the ambiguity of the storytelling. It seems 'strange.' I'm not obsessed by violence or strangeness and I'm not trying to be randomly weird. The story does what it has to do. It's oblique and elliptical.

I was struck by the number of disabled, injured, and immobilized bodies we see here: first Émile's, then those of both women in the last act. Is there something inherently interesting about bodies in extreme states like these ones?
It's a very hard question to answer. I usually like my characters not to be trapped but to be obliged to go from one state to another. And only the strong will survive. It can be emotionally, intellectually, or physically. I don't know why, but I need obstacles in my stories. Years ago I discovered I live with a chronic disease, and I became much more conscious of my body and about the days I have left on this earth. Unconsciously, it affects the way I'm creating my stories. I know that, but I have no certitudes, and I don't visit any psychoanalyst to confirm.

Could you talk about Melissa Lavergene's score? It's not quite like the usual percussive score used to signify some primal force coming from the jungle; it's more tentative, furtive.
For the first time, I asked someone to create a score for a film of mine. I was afraid. I asked for something very, very simple. Just a minimal drum roll to create the effect that we are turning the pages of a fairytale book. Musicians always create something much more complex and sophisticated than what you asked for in the first place. I basically fell in love with what Melissa proposed. The music is a character now, always telling the viewer, "Hey, maybe you don't know why you hear that music now but, be patient, something is coming... Just wait." It adds to the comic-book/fairytale side of the film.

The film's tone seems to change radically in the closing moments: the community becomes a kind of chorus, openly (and hostilely) commenting on the women's presence in this environment, while Guillaume strikes a mournful note as the women wander off like spectres. This made me curious about how the film's genre never seems fixed, in this case mutating from horror to tragedy. Is genre something you're conscious of when making films? Is it something you're deliberately playing with?
I grew up watching every possible horror film. Then I discovered arthouse cinema, but THE damage was done and genre cinema was in my DNA forever. Being a cinephile, being interested in creating hybrid films, I don't think I could make my own typical thriller or horror films. I take revenge by linking different genres together. It's never totally assumed and it keeps reminding you that everything can happen. I hate when I am comfortable. That's why many [of my] films seem to be in two parts (Our Private Lives, Carcasses, Vic + Flo). When I'm not surprised myself or when the story gets too comfortable, I need a quick shift. I don't know if it's deliberate but it's necessary. Sometimes the cost of that is losing some viewers along the way, I know. Those films suffer from attention deficit disorder. But usually I'm happy with the level of difficulty I imposed upon myself, even if I've failed.

Vic + Flo Saw a Bear starts its limited run at TIFF Bell Lightbox on Friday, November 22. Côté will be on hand to introduce Friday's screening and give a Q&A afterwards.