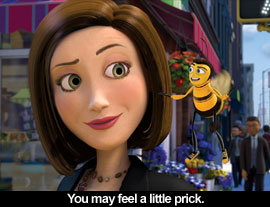 by Walter Chaw If not for a moment where John Cusack delivers in his Cusack Patter™ a speech about the beauty of love in a temporary world, there would be nothing at all to recommend Martian Child. It's a heartless bit of heartfelt pap wherein widower and sci-fi author David (Cusack™) decides on an apparent whim to adopt crazy-ass little boy Dennis (Bobby Coleman) from a day-care/orphanage that should have its license revoked. The little kid looks and acts like Michael Jackson, complete with DayGlo complexion, parasol, and breathy squeak-talk from the Jennifer Lopez school of urgency, turning Coleman's into the most irritating performance since the last time Lopez was in anything. Closer to the point, the screenplay is a series of non-reactive statements expected to be taken at face value: that this dude would adopt a quirkily-disabled kleptomaniac freakshow and feel the sting of parental devotion, for instance, or that the two of them would teach each other to, gulp, love again. It all plays like an Oliver Sacks case study by the end, a Paul Simon adult-contemporary story-song--The Boy on the Specimen Tray and the Dog Reaction Shot.

The perfunctory love interest is Punky Brewster-dressing Harlee (Amanda Peet). Her platonic cheek-smooching and embarrassed looks would be fetching in a seventeenth-century bedroom farce but seem socially retarded in a contemporary rom-com. David's sister Liz (Joan Cusack™) is a wacky, truth-telling mother of two, while his wacky agent (Oliver Platt™) provides a couple of moments that I think were intended as comic relief. Later, there's a brittle British publisher (Anjelica Huston™) who rejects David's new manuscript (spoiler alert: it's called Martian Child!) only to be shown wiping away a patrician tear on the way back across the pond. Martian Child is a dial tone, a test pattern. It's dreadful, deadening, scored-with-an-anvil stuff and I like Cusack enough to blame him for it. In choosing to lend himself to shit like this and Must Love Dogs, he's pretty firmly become part of the problem; I can't believe that the guy who powered stuff like Grosse Pointe Blank and Being John Malkovich could be led through something like this without an inkling of its relative quality. Can a veteran of fifty-plus flicks still not know how to choose a screenplay? Martian Child is sub-I Am Sam garbage. It's so bad that there's a kind of genius to it--and so powered by cliché that it's almost an Ionesco exercise in Theatre of the Absurd. Here's the punchline: a bunch of assholes are going to love it just enough to grease the chute for the next K-Pax redux. Cusack had to have understood that the reason there's a maxim about working with children and animals is because people are suckers for them. The real function of the maxim, though, is as an artistic integrity acid test: you do a Martian Child and you don't get it, not anymore. I guess even Lloyd Dobler's gotta pay the mortgage.

But Jerry Seinfeld certainly doesn't, meaning his involvement in DreamWorks umpteenth terrible animated movie Bee Movie is the exclusive product of limelight-addiction. He voices Barry Bee, a recent graduate of the bee academy who's on the verge of making a lifelong-commitment to a shitty job his parents hope will involve menial, humiliating labour. Welcome to the club. Naturally, Barry dreams of something more and during his travels in the great outdoors meets dingbat florist Vanessa (Renée Zellweger), with whom he falls in love. Bestiality (?) issues are shuttled to the side, as are race issues, broached first by a Chris Rock-voiced mosquito (who bemoans his status as most-hated insect), then in a closing argument that finds Barry declaring an end to the dominance of the White Man plantation owner. (Said plantations being commercial apiaries, of course.) You heard that right, by the way: the bulk of Bee Movie takes place in a courtroom as Barry lobbies to have humans stop stealing honey from bees.

Devoting the extended middle of a kid flick to a trial makes about as much sense as setting a Star Wars movie in the world of senate debates and trade embargoes; the result is a movie that's never funny, never meaningful, never coherent, never animated. The inside of the hive is un-textured and boring, the outside of the hive is un-textured and boring, and if there are jokes, I missed them. Ray Liotta, Larry King, Sting, and Oprah Winfrey contribute out-of-context vocal cameos and any opportunities the premise might've had involving the dehumanization of an entire culture is thoroughly undermined by the final solution that a life of endless toil ain't so bad after all. Even the homey mosquito is acculturated in the picture's preordained happy ending, suggesting, The Pursuit of Happyness-style, that the only way to survive in a culture intent on exploiting you is showing up to work, maybe singing a spiritual, and getting your mind right. Originally published: November 2, 2007.