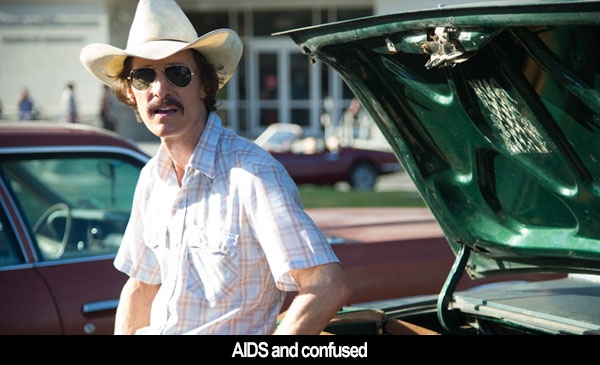 by Walter Chaw Agreeable, well-meaning horseshit in the Lorenzo's Oil vein (but horseshittier), Jean-Marc Vallée's really bad Dallas Buyers Club is saved to some extent by a couple of fine, showy performances from a skeletal Matthew McConaughey and a skeletal Jared Leto in drag, but ultimately defeated by the standard straw-man activist biopic formula. Not to put too fine a point on it, it's this fall's Promised Land: another liberal movie that injures the credibility of the liberal platform by being so shrill and didactic as to play like melodrama of the worst kind--that is, the self-important kind. All of which is not to say that I didn't sort of enjoy it in the moment (it's fun to marvel at how close to death McConaughey looks, and how pretty Leto is), but to say that the act of writing about it means taking the time to think about it, and that Dallas Buyers Club doesn't suffer much thinking-about.

McConaughey continues his career resurrection by losing 38 pounds to portray real-life bad person Ron Woodruff, who turned his diagnosis of HIV/AIDS into a lucrative smuggling endeavour selling non-FDA approved pharmaceuticals to a desperate, captive clientele. Unable to completely penetrate the gay community in the early years of the disease, Ron enlists the help of transgender (or transvestite) Rayon (Leto) as a business partner. Alas, poor Rayon can't control her drug habit (though Ron refers to her as "he" and is never corrected, so probably just transvestite?), leading to the requisite scenes, just as Ron's outrage that he can only get a prescription for the potentially hazardous AZT in the U.S. leads to those requisite scenes. Populating said scenes are Evil Pastiche of Medical Establishment (Denis O'Hare), Doe-Eyed Empathetic Pastiche of Open-Mindedness Within the Medical Establishment (Jennifer Garner), and Homophobic Best Friend (Kevin Rankin).

Kudos to Dallas Buyers Club for not devoting screentime to Ron tracking down any of his numerous rodeo-groupie sex partners to let them know they should probably get a blood test; demerits to Dallas Buyers Club for showing Ron, post-diagnosis, turning down his beloved hooker/stripper sex because he's suddenly developed morality. Points for showing Ron research his ailment with the help of a microfiche and card catalogue; demerits for skipping to the part where this illiterate fuckwit becomes an international baron of illicit trade while growing the foresight to disguise himself as a priest when crossing the Mexican border back into the States. I forgot to mention the obligatory omnipresent FDA agent (Michael O'Neill) who constantly thwarts Ron's attempts to sell shit he's bought overseas that might be poison to people who are desperate and dying. There are those requisite scenes with him, as well.

That the whole thing is so enjoyable for so long speaks to McConaughey's ability and newfound predilection for hammy Oscar-chasing. Both he and Leto deliver in a rafters presentation that's a lot like that Broadway show you get tickets for because, hey, it's Patrick Stewart and Ian McKellen, who cares what it's about? Dallas Buyers Club, alas, is about a sad time in our recent history when a plague descended on a specific group unpopular enough that this only exacerbated its unpopularity and perhaps retarded a response to the plague's treatment. It's important stuff--even the existence of the titular membership club, where the dying could obtain Ron's harvest for a monthly fee, is vital fodder for conversation. Alas, the only thing being discussed in Vallée's film is Ron's bottomless, scenery-chewing righteousness, handily usurped in a postscript (following the requisite in-film slow-clap applause scored to tinkly, horseshit piano) declaring that for all the fury in the flick over the dangers of AZT, it is in fact AZT that has been used successfully in the treatment of the disease. It's the equivalent, really, of having an end title that reads, "Never mind." No one said Dallas Buyers Club wasn't funny.

i love this review. You caught the same point at the end about AZT that had me going crazy. Thank you for having some guts and not falling in line on this one