THE BLU-RAY DISC
by Bill Chambers Play it loud, that's my advice. The 5.1 DTS-HD MA track on Warner's Blu-ray release of The Conjuring is dynamic and eruptive, the perfect showcase for a mix that relies on all the tricks of digital-era horror (swirling pans, shrill stingers, brief vacuums of silence), but doesn't blow its wad early or descend into cacophony--two things you can't say for 1999's remake of The Haunting, Lili Taylor's last foray into the genre. Filmed with the Arri Alexa, The Conjuring meanwhile looks cinematic enough in its 2.40:1, 1080p transfer. Though a HiDef sharpness causes a bit of cognitive dissonance with the period trappings, it's nominally preferable to any kind of pseudo-grit, a little bit of which may have been added to the prologue. (At the very least, these introductory scenes were contrast-boosted and slightly desaturated.) In bright, daylit scenes, the image positively gleams, but the less light there is, the more it's prone to noise, mild banding (including colour-banding), and motion trails, all of which are plausibly endemic to the source material. Nevertheless, the studio dedicates little more than one layer of the BD-50 to the picture proper, and although DP John R. Leonetti takes after brother Matthew (who shot Poltergeist) in vying for the title of "prince of darkness," shadows are so opaque as to have a flattening effect that seems undesirable, a by-product of overcompression.

Included on the disc are three featurettes of varying levels of silly. "Face to Face with Terror" (7 mins., HD) interviews the real-life Perrons, focusing on Carolyn Perron née Buchanan, the woman played by Taylor. It's extremely cagey with the facts of the real case, and to hear Carolyn reflect on the symptoms that overcame her in that allegedly haunted house is to wonder whether she was the victim of misdiagnosed depression. "A Life in Demonology" (16 mins., HD) finds lots of certified/certifiable occultists testifying to the validity of the Warrens' paranormal research. Ed Warren is dead, unfortunately, but Louise is alive, available for consulting, and still dressing like a Victorian doll, evidently. Speaking of which, the piece teases a glimpse of the real-life "Annabelle" then blurs it out, ostensibly to shield our eyes from its awesome evil but really, as anyone who's bothered to Google the thing knows, because it looks comically unmenacing compared to the one in the movie: 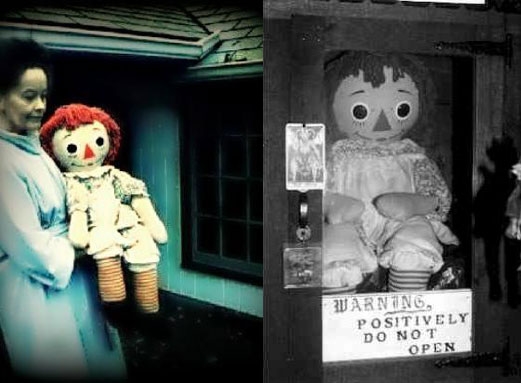 Lastly, in "Scaring the @$*% Out of You" (8 mins., HD), actual human beings say things like "His artistry is off the charts!" about director James Wan, who talks like a teenage girl, turning answers into questions? I didn't know they did that in Australia? "I try to think through my own head..." he remarks at one point. It's kind of a deal-breaker. Still, it's very cool to see the set, a two-storey house in the middle of a soundstage. A trailer for We're the Millers (HD) cues up on startup; DVD and Ultraviolet copies of The Conjuring are included in this combo pack.