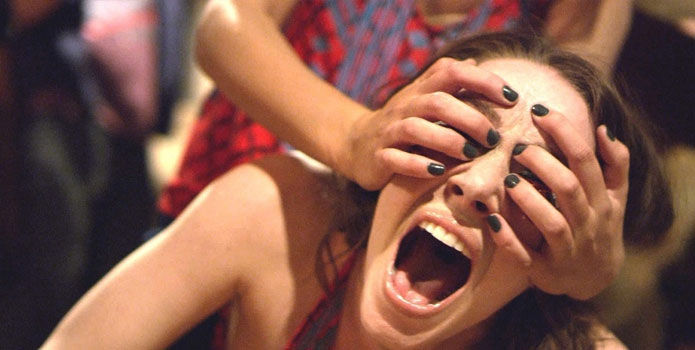 by Walter Chaw David (Rhys Wakefield) screws up and loses girlfriend Jill (Ashley Hinshaw), only to run into her the night of a gigantic, hedonistic, Gatsby-esque party attended by rave strippers, DJs, and drug dealers. An unlikely place to stage a comeback, David, with buddy Teddy (Logan Miller), coaxes Jill into a conversation that goes south--but then the lights cut out, there's a weird meteorite event outside, and David finds himself with the opportunity to try the conversation again: same place, different Jill. It seems that something's created a quantum split--a little bleed-over maybe from a parallel dimension that twists time and creates doubles of all the revellers, though only a few notice. The ones who don't party on in a kind of nightmarish inattention that reminds of the dreamscapes of Miracle Mile and After Hours; the ones who do begin to wonder what will happen when the time-slips overlap and they find themselves attempting to share the same space as their doppelgängers.

+1 is innovative, sexy, energetic, and possessed of that one The Prestige/Primer/Timecrimes high concept that inspires any number of thorny questions, but lands with our teen heroes as a two-headed hammer pounding out violence with the forehand swing and sex with the backhand. +1 does that well, the sex-and-violence, but what it does best is suggest that when confronted with itself, the ego (especially the pubescent ego), being what it is, becomes revulsed. That's what makes the movie's signature moment, when introverted girl Alison (Colleen and Suzanne Dengel) finally finds someone who understands her in her double, resonate the way it does. +1 does the debauch of the late-teen scene as well as any film in this Year of Debauchery (Spring Breakers, The Bling Ring)--does it in fact as well as anything since Risky Business and the heyday of '80s teensploitation. But it elevates it with strong performances, tight direction, and a genuinely clever approach to a conceit the poential of which has never really been realized (see: Multiplicity, The One, Doppelganger).

Throughout, characters ask each other which one they are, in moments that aren't so much The Thing as they are existential questions posed to friends on the verge of the rest of their lives. David's attempts to woo Jill are tinted with Say Anything... melancholy-- that Umbrellas of Cherbourg romanticism that indicates that for all the euphoria of the first bloom of love and lust, everything is doomed and nothing is likely to work out. Even the peculiar moral politics of porn fantasies are touched upon when Teddy, while lucking out with hot blonde Melanie (Natalie Hall), is confronted with the appearance of her double and asks if they wouldn't consider just going with it. It's weird, yes, but it's also the most natural thing in the world to wonder if you're a man, particularly a young one. +1 rocks partly because it presents the familiar in such a way as to make it appear alien. It puts human nature under the microscope, and it does so without any ascription of intent--there's no real explanation for what's happening, no alien-invasion plot (though that's speculated), no end-of-times concerns (though that subject comes up, too). If there's an intelligence behind the events of the film, it remains a mystery. +1 would make a valuable double bill with Chronicle as diaries of youth's desires: They're imperfect, it's true, boasting as many missed opportunities as bull's-eyes, yet both offer proof, ultimately, that movies about this demographic need not be clearinghouses for idiots. It's pretty great.