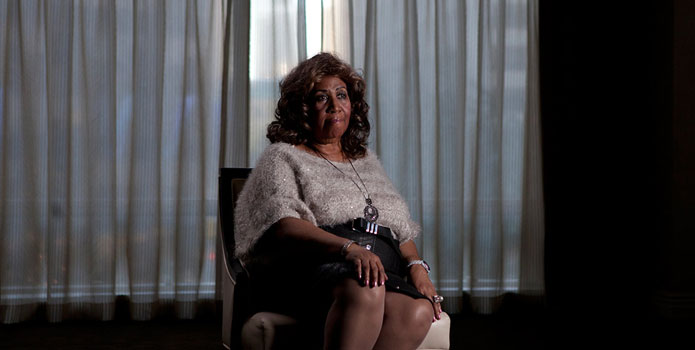 by Walter Chaw And so I find myself again reviewing a documentary that's terribly informative but not terribly artistic, Greg Camalier's Muscle Shoals, which does a very fine job of cataloguing all the great musicians who discovered their "sound," their "funk," their swamp, if you will, along the banks of the Tennessee River in a little Alabama town called "Muscle Shoals." Aretha Franklin, Paul Simon, Jimmy Cliff, Wilson Pickett, Percy Sledge, Traffic--and, oh, there's Bono, talking about the struggle of black people, why not. Camalier throws a lot of stuff out there but can't quite find the balance between artsy pretension and straight reportage. Every time he mentions someone calling someone else, in other words, he's somehow dug up a different portrait of someone on a telephone--let it marinate enough, repeat it enough, and suddenly it's unintentionally hilarious. Bono could be connected to the film because either U2 was greatly influenced by the Shoals variety of R&B or because Bono is an expert talking-head or because Bono is an insufferable boor who likes to be on camera. Whatever the case, archival footage--always fun, if not that much funner than a night spent chain-surfing YouTube--splits time with new interviews with dudes like Keith Richards who wax rhapsodic about the magic of the place. It doesn't go pear-shaped, though, until Native Americans are invoked, revealing that the original name of the Tennessee River had something to do with singing.

That injection of faux-spiritualism/mysticism is just one ingredient in Muscle Shoals' unwell stew of rapturous ideas and endless anecdotes. It's a music-lover's dream, really, hearing first-hand from the source of Wilson Picket's pugnacity and Percy Sledge's flop-sweat; it's cool to see how gnarled the first knuckles of Keith Richards's hands have become from years of rocking ass--and revelatory, frankly, to learn that so many Motown songs weren't Motown at all. Time is spent on the race issue (cue Martin Luther King having a dream), on the backing musicians most were surprised to learn were crackers ("We called 'em peckerwoods!"), and on the run of bad luck that led to the establishment of the Alabama-based FAME label in the first place. Implicitly, this is where FAME recording studios founder Rick Hall got all that soul that Auntie Ree mentions as unusual for a white boy. But it's strictly implicit, and then there are long shots of sunflower fields and rivulets trickling through banks of mud. Andy Goldsworthy material, for sure, and also completely ancillary to the film. Muscle Shoals handles an easy-to-like subject with broad interest in a discursive, undisciplined way that plays a suspicious lot like a demo-reel. Anyway, it's a very fine video discography of the little studio that could. And that's all it is.