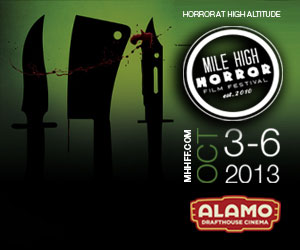 by Walter Chaw I'd been vaguely aware of the Mile High Horror Film Festival its previous three years to the extent that I'd reached out at some point to see about coverage, but it came to nothing and was easy for me to ignore. Then a good friend moved from the Denver Film Society to the newly-opened Denver location of Alamo Drafthouse as creative director, and one September morning, I found myself driving down to meet with him and chat about his new position. This Drafthouse is beautiful, by the way, and for cinephiles in the Denver area, it's a hope devoutly wished, answered. If you don't support this venue and its mission statement ("to save cinema," its co-owner, Tom, declared to me proudly), you don't deserve it. Anyway, in the cavernous, leather-lined lobby, I met my friend, who had just come from a planning meeting with festival founder Tim Schultz. Handshakes facilitated, I got in touch with ace PR guy Travis Volz a few days later, and suddenly found myself sitting in a little booth across from Jim Mickle, director of a very, very good remake/not-really-a-remake of We Are What We Are.

Here's the thing about Mile High in its fourth year: it's like that adorable kitten you brought home and, four months later, it's a jaguar. There's a good chance it's going to explode. The experience of attending it, certainly, is superior to almost anything else the area has to offer, plus most shows are sold out, packed with infectiously enthusiastic crowds. Mile High's roster of guests--Linda Blair (gracious), Ken Foree (tall), Doug Bradley (kind), Tom Savini (pissed-off), Meg Foster (nice), "Rowdy" Roddy Piper--and special screenings of The Exorcist, They Live, and Hellraiser are a geek's delight. It's also on the verge of wobbling out of control: For one weekend, the lobby of 'The Alamo' is elbows-to-assholes with people, noise, buzz; it feels like it's right there on the verge of shaking loose--it has that exhilaration of something new finding its footing, as well as that fear of how to manage explosive growth. That being said, special thanks to volunteers Sandra and Tricia for their grace and friendliness and absolute professionalism.

Waiting for Big Bad Wolves to start (and for my espresso chocolate shake), I listened to three college-age girls excitedly discuss the three films they'd already seen that day at the festival. Awesome. With the frankly mind-blowing trio of We Are What We Are, Big Bad Wolves, and Cheap Thrills to anchor it (and an aggressive shorts program that is surprisingly well-attended), this little fest has already exceeded any number of more established film festivals in terms of vision and taste. I feel lucky to catch this wave before it crests. Also, the herb-mayo fries pair incredibly well with the Drafthouse's draft root beer, and there may be no better place in the world to see a movie.