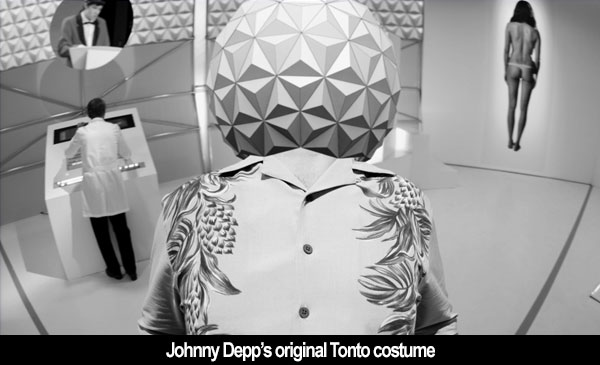 by Walter Chaw Randy Moore's ridiculously-ballsy Escape from Tomorrow proves itself to be a good deal more than a gimmick--said gimmick being that it posits the Magic Kingdom as the locus, the key modern metaphor, for bourgeois discontent, with much of the picture shot surreptitiously on the grounds of Disneyland and Disney World. It's very much the model of a Luis Buñuel film, not just for its expert surrealism, but also for its sharply-reasoned social satire. It does the impossible in our modern conversation by feeling urgent and fresh, presenting something that's genuinely shocking to our jaded sensibilities. If there's anything left that is perverse, one is this violation of such a famously litigious sacred cow. It isn't even that the idea of using Disney as the eye of a capitalist/vaguely fascistic hurricane is particularly novel: consider that David Mamet took it on in his collection of essays Some Freaks--not to mention the gallons of ink spilled on its essentially corrupt nature by wanks following the long immolation of Disney products Britney Spears and Miley Cyrus. No, what's novel about Escape from Tomorrow is that it does what it does through images; it is essentially this generation's Superstar, in which Todd Haynes told the life and death of Karen Carpenter using Barbie and Ken dolls. A picture that understands its subject and its relationship to popular culture well enough to make everyone pretty uncomfortable with their own complicity in it all, it's an indictment of a collective upbringing. The recognition you experience is of your own indoctrinated childhood.

On his last day of vacation at Disney World with wife Emily (Elena Schuber) and his two adorable moppets (Katelynn Rodriguez and Jack Dalton), Jim (Bob Odenkirk-y Roy Abramsohn) gets a phone call from his boss telling him he's been laid off. That's when he starts drinking, and hallucinating a bit, and stalking a pair of nubile young (very young) French girls (Danielle Safady and Annet Mahendru) while wrangling a son he doesn't appear to like very much and a daughter he dotes upon but neglects as he apparently has an affair he can't remember with a mysterious witch (Alison Lees-Taylor). The first moment there's something wrong, Jim's son's eyes turn black, and Emily reassures that the little guy isn't really Jim's son. It sets the table for a run on middle-class anxieties: The Ice Storm affairs that aren't nearly as exciting as fantasized; being cuckolded; losing your job; not being attracted to your aging, harridan wife; being attracted to girls closer in age to your children than to you; the prospect of not being able to afford to go on vacation; the prospect of having to end your vacation; losing your kids to pederasts because you're contemplating adultery; being embarrassed by your children in public; being embarrassed by your children before potential partners for affairs; being a bad father; being a bad husband. It infuses the act of going to a Disney park with resentment and fear--the anxiety of what Mamet called "Every Thing Not Required Is Forbidden," the "internalization of authority, and its transformation into a Sense of Right." Given that, each of Jim's banal marital/masculine transgressions takes on the gravity of cathedral bells on Disney's hallowed cultural ground. It's pissing in the Vatican, essentially: You piss every day, but not in the fucking Vatican.

The contextual issues raised by Escape from Tomorrow are of the same species as those raised by William Carlos Williams's "Red Wheelbarrow": the idea that things only gain definition in direct relationship to other, accepted concepts. When Jim muses, then indulges, in adultery at Disney World, it's more meaningfully empty, frivolous, and destructive than if he did the same thing in his suburban reserve. That it's not entirely clear whether he's indulged in more than a fantasy of adultery (and a rather sordid one at that), however, adds a layer of complexity to distinguishing "reality" from fantasy in a film that was shot on the sly and augmented, obviously, by some trickery that is too obvious to be an accident, given the professionalism of the rest of it. What I'm saying is that Escape from Tomorrow speaks truly about the nature of film as representational art by attacking Disney World as essentially a totalitarian state built on anti-Semitism, vengeance plots, and misogyny masquerading as empowerment. By suggesting, as the picture does, that all the Disney princesses are high-dollar hookers servicing Arab johns is a not-subtle swipe at American oil interests on the one hand, but more compellingly a metaphor for just exactly what's being packaged and sold in that one money shot of The Little Mermaid beaching herself on a rock as an orgasmic spray of foam erupts around her. At the end, after a surreal moment in the Siemens Epcot Dome, a wonderful visit to a park nurse (Amy Lucas), and the contraction of a deadly disease whimsically-named, Escape from Tomorrow lands as a debut as smart in its way, as disturbing and incisive, as David Lynch's Eraserhead. It's imperfect, and even that's part of its overall effectiveness. I've read that it's been shortened from the Sundance version I viewed. Frankly, and sight unseen, I can't imagine what I would cut.