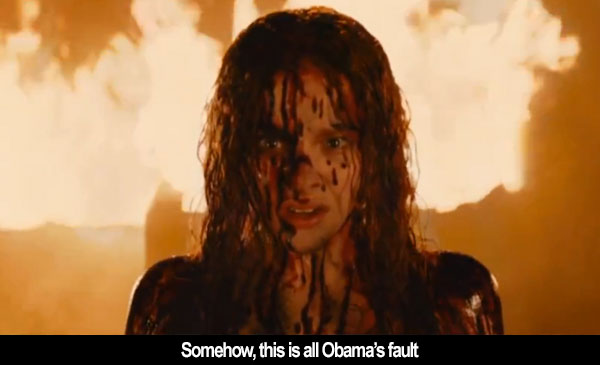 by Walter Chaw If you were to boil down Brian DePalma's work, at least his earlier work, into a few ideas, you'd land on the way he took Hitchcock's subterranean perversions and made them perversion perversions, transforming pieces and suggestions into themes and declarations. Looking at DePalma's Carrie today, what's there is a clear attempt--often successful--to elevate B-movie tropes to the status high art, or high pulp: What Godard did to gangster films, DePalma did to Hitchcock, turning the already formal into formalism. When DePalma was at his best, his movies evoked in daylight what Hitchcock inspired in shadow. Of its many technical innovations, his Carrie, an adaptation of Stephen King's not-very-good but vibe-y debut novel, was aided immeasurably by pitch-perfect casting: Sissy Spacek, P.J. Soles, John Travolta, Amy Irving, and Nancy Allen. Hip then, it's hip still--and sexy as hell, as befitting a story that's ultimately about a girl's sexual awakening and, let's face it, really bangin' first orgasm. On prom night, no less. What could be more American?

Kimberly Peirce's Carrie isn't sexually perverse like DePalma's. Its sexiness is entirely the dewy kind--the difference between porn and couple's porn, if you will. Both will get you off, but there's less guilt attached to the latter. I hated the idea of Peirce for this remake--I thought Boys Don't Cry was didactic and kitschy, on the nose if not nearly as on the nose as getting her to do another abused-teenager movie. Except that Peirce's Carrie does something DePalma's doesn't do nearly so well: it describes Carrie's headspace, so that her telekinesis becomes expressionistic. Her power is an extension of her as she explores it late at night, alone in her bedroom--a way that she becomes, as she calls it, "a whole person," at last. Peirce even manages to understand Carrie's chief tormentor Kris (Portia Doubleday), demonstrating a high level of empathy that allows this new adaptation to be something more than a man's version of a girl's revenge movie. Take how the two pictures open: DePalma's with a volleyball game transitioning into a soft-porn push-in to a girl's locker room (he'd do this same Psycho thing, with more fetish if you can imagine (and you don't have to), in Dressed to Kill). It's naughty, let's face it. Peirce's volleyball game is played in a pool, and the subsequent locker-room explosion allows a wider tableau for the girls' cruel reaction to Carrie's first period and, with it, the possibility for balance--and for multiple identifications, including feminine body horror.

For the uninitiated, Carrie (Chloë Grace Moretz) was raised by religious wackadoo and single mom Margaret (Julianne Moore, in the role she was born to play), who has kept all knowledge of the birds and the bees a secret in hopes that sin will pass her by. It doesn't. And just as her body blossoms into womanhood, so too flowers a latent telekinetic ability that finally allows Carrie to exert some control, some power, in her life. Distressed by her own bullying of hapless Carrie, basically-good girl Sue Snell (Gabriella "thank God she's 24 because I'd be going to jail" Wilde) rejects her Mean Girl bestie Kris and asks jock boyfriend Tommy (Ansel Elgort, who wins the film in a brief getting-ready-for-prom montage) to ask poor Carrie to the prom. Alas, Kris and bad-boy boyfriend Billy (Alex Russell, who has not one thing on Travolta--especially that introductory sequence set to Martha Reeves & the Vandellas) hatch a plan to humiliate Carrie at said prom, and by the end of the night poor Carrie White, painted red with pig's blood, pulls a Samson and tears down the whole fucking house.

Where Margaret was essentially an evil, evangelical witch in DePalma's film, she's a more dangerous sort of nut in Peirce's: a fundamentalist so askew that she gives birth alone while praying for death. Carrie 2013 resists the instinct to vilify, to reach for loud, screeching hysteria as a feminine-madness catch-all. Consider the same moment in both films where Margaret declares to a polite neighbour that "we live in godless times," how in the DePalma it's as Margaret is proselytizing and asking for a donation, while in this one she's humiliated, surreptitiously cutting herself. If it's still hysteria, it's of the more introverted, self-directed kind--the maelstrom is inside this Margaret, and she's put it into Carrie. Margaret is no longer interloper but shut-in, a quieter infection. Or how about the poetry-class sequence that inverts the writer of the verse, making Tommy the critic, the white knight of a slightly different sort who recognizes that the teacher, more than a harmless blowhard, is a frustrated old man teaching a classroom full of nubile girls, right on the verge.

At the centre, though, is Moretz, who, along with Elle Fanning and Saoirse Ronan, offers a bright, shining hope for the future--and the present, as it happens. She's heartbreaking in this role. Her fear, her nervousness, her embarrassment, and that moment where Tommy asks her to the prom (the second time) and all the world...floats in happy sympathy. There's more purpose in this Carrie; like the best of King's writing, as it happens, it's not obvious that the whole thing isn't a metaphor for trauma. It's not a B-movie at all--not prurient, it's deadly serious, and when Carrie erupts, as Carrie must, it's archetype, not circus. The irony of it is that DePalma's film shares the view of Carrie as a freak; Peirce's sees her as a little girl lost, eaten alive by the burden of fanaticism, class, beauty, biology. The DePalma is about Sue and Kris, the Peirce is about Carrie herself--and therein lies all the difference.

Good one. Yeah, I deleted your earlier comments because they actually insulted anybody who might've identified with what Walter wrote more than they insulted Walter, and because this is my carpet that I pay for and I decide who gets to shit on it. You're a real fuckin' loser, you know that, right?