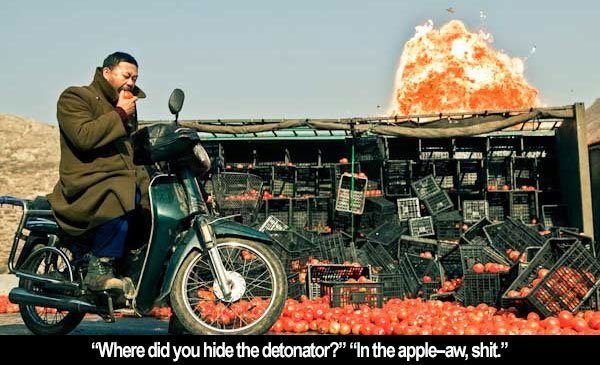 by Angelo Muredda The blood doesn't flow so much as it spurts in A Touch of Sin, Jia Zhangke's invigorated if uneven return to straight fiction following an extended sojourn in hybridized documentaries about modern Chinese cities. More than the formal homecoming, however, it's the nature of the storytelling that surprises in his newest--the leap from the elegiac tone of films like 24 City into the more primal stuff of pulp. A wuxia anthology with revenge-thriller overtones, A Touch of Sin is an unusually direct genre exercise for a master filmmaker, in the sense that, unlike Steven Spielberg's Munich and other comparably shame-faced prestige films that dip a single toe in the waters of genre, it doesn't condescend to the populist trappings of the material. Jia isn't slumming so much as tapping into the righteous indignation of a popular tradition of stories about wronged knights and ruined innocents, sincerely transposed here to the working-class fringe of a nation state in the throes of late capitalism. If Jia's violence comes fast and leaves a mess, then, it's a testament to his willingness to get his hands dirty where others might have kept a safer distance.

After a finely-tuned opening that interweaves two of the narrative strands to follow, we meet Dahai (Jiang Wu), a frustrated coal miner in Shanxi province who resolves to take arms against the corrupt overseers who've sold off the collective property of the mine without providing dividends to the workers. Although his cause is clearly tainted by his paranoiac delusions of grandeur, Dahai comes off as a suffering saint next to our subsequent protagonist, Zhou San (Wang Baoqiang), a migrant worker on a motorcycle who seems to make do strictly through the spoils of his violent muggings. From there, we turn to Xiao Yu (Zhao Tao), a receptionist at a spa who, before the working day is done, is threatened by both her lover's family and a couple of surly businessmen who stumble in after hours demanding sexual favours. Her ecstatic outburst is balanced by the relatively subdued closing story of a young textile worker named Xiao Hui (Luo Lanshan), who flees his job when an accident puts him in debt to a colleague and finds new work as a server in a grotesque upper-class brothel, where he falls in love with a young prostitute in military garb.

The anthology format is a smart vehicle for this kind of cultural criticism, insofar as it articulates Jia's communitarian politics in structural terms without resorting to too much heavy symbolic lifting--it's enough that the four protagonists are on parallel tracks--or soporific speeches. Still, one wishes that the film's affective charge were more evenly distributed across the stories. After the alternately transcendent and hollow shotgun blasts of Dahai's segment, Zhou San's story feels hopelessly small, banal whether by design or by comparison: his ascetic drifter is no less a stock character than Ryan Gosling's motorbike-racer-slash-stoic-thug in The Place Beyond the Pines. Where the third segment rests on Zhao's powerful performance, even in an almost comically obvious sequence where she's slapped in the face with a stack of bills, the last is similarly marred by an errant strain of sentimentalism. It hinges on our familiarity with conventional stories of tragic young men and the hardened young sex workers they love, counting on us to fill in the sympathetic blanks.

It isn't that Jia uses these tropes unthinkingly, but rather that their place in his tapestry of a corrupt modern China, haunted by the moral uprightness and Old World order of the medieval opera several characters come across in a town square, is too easily come by. This more refined version of the narrative gamesmanship played by significantly lesser talents like Alejandro González Iñárritu only registers as a problem, though, because of the coiled tension and leanness of A Touch of Sin's powerful stretches, like the drum-accompanied tracking shot that initiates Dahai's homicidal rampage. Jia's innate gracefulness as a filmmaker is a surprisingly fine match for these moments of redemptive violence; you'd be hard pressed to think of a more psychologically astute distillation of the vigilante's god complex, for instance, than the eerie shot that glides, bullet-like, from Dahai's weapon to the body it's about to destroy. If the second and fourth segments feel like allegorical padding, in other words, the material they're cushioning is well worth the buffer.