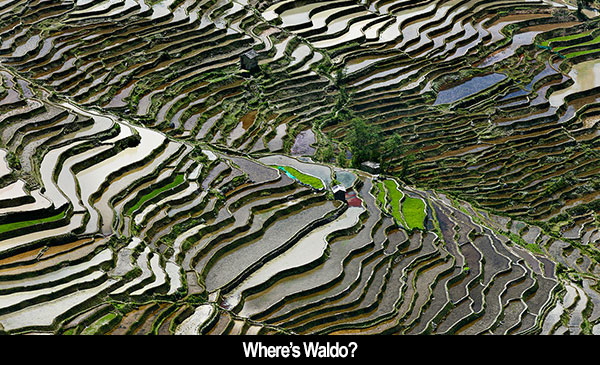 by Angelo Muredda Although it's the first of her films to be co-directed (by Manufactured Landscapes subject and Canadian photographer Edward Burtynsky), Watermark is less a departure for Jennifer Baichwal than it is the apotheosis of her style. Since 1988's Let it Come Down, Baichwal has been the most formally adventurous documentarian of the artistic process, not just profiling the work of makers as disparate as Paul Bowles and Shelby Lee Adams, but attempting to recreate their singular visions as well. In her previous film, Payback, that meant converting Margaret Atwood's lecture series of the same name into an evocative position paper about debt in all its global permutations, from blood feuds to legal restitution. In Manufactured Landscapes, it consisted of finding a way to translate Burtynsky's large-scale images of factories and pock-marked terrains into cinematic tableaux, with collaborator Nick de Pencier's cinematography of Burtynsky's stomping grounds effectively adding a sense of duration and movement to the print-bound stasis of the originals. Watermark might be the most radical variation on this approach, an abstract consideration of the interaction between water and human-made structures, carried out largely through wordless aerial photography of streams bisecting grotesque landscapes rather than the usual talking-head exposition.

Baichwal's films tend to thrive on the tension between her own digressive tendencies--namely her habit of hopscotching around the globe to tease out variegations of a given theme (in this case our channelling of water)--and the more finely-tuned methodologies of the artist she's profiling. Perhaps because of Burtynsky's heavier presence in this project (he has a book to sell, after all), it's the startling images that resonate more than Baichwal's usual intelligent thematic crosshatching, which this time spans no fewer than ten countries and locations as diverse as a poisonous tannery straight out of William Blake and a Hindu pilgrimage site on the Ganges. More precisely, Watermark leaves an impression when it seems least keen to do so, not when it speculates on the economic meaning of water, something any number of lesser films like Last Call At the Oasis have done about as capably, but when it captures its elemental force through plain image-making and symphonic editing.

The opening act is one of the most disorienting in recent nonfiction filmmaking, starting with a long, glacial pan across the walls of a dam in China as barely-contained, churning brown waves slam up against it. From that demonic din we suddenly skip, via the hardest of smash cuts, to a hollowed-out land on the Colorado River, the terrain dried out into an endless expanse of cracked tiles. Both images, rendered in ultra HiDef, feel enormous, and they're held long enough for us to think about the yin and yang of what it means to harness energy from our surroundings. The effect of the juxtaposition of these two spaces is sublime, a reminder of the imaginative paucity of supposed visionary filmmakers like Christopher Nolan, whose idea of a dream world without boundaries in Inception looked a lot like downtown Chicago. By contrast, Baichwal and Burtynsky's scale is suitably Kubrickian.

As a formalist exercise in capturing and blowing up the intersection of human technology and natural phenomena, then, Watermark is unimpeachable. Yet the power it derives from the co-directors' respective grand visions is diminished by the relative smallness of its declarations. Burtynsky's first onscreen appearance is an odd one, casting a dull explanatory shadow over everything that follows. His flat recitation of the thesis--that his current project explores how water shapes us and how we in turn shape water--feels like a pitch for the film we've already bought, especially once we follow him into the offices of Steidl, a high-end German publishing house that crafts art books like Burtynsky's newest--a concordance, more or less, to the documentary we're watching. Though Burtynsky fans and artisanal press enthusiasts may revel in this behind-the-scenes material, it seems an unnecessary look into the workings of the sausage factory, hopelessly minor next to the money shots that make up some of the most stunning compositions in recent cinema.