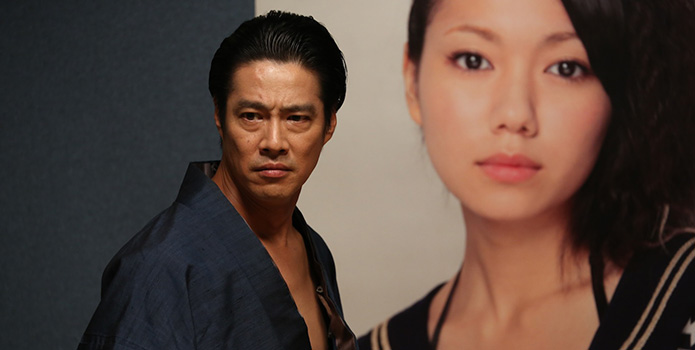 by Angelo Muredda Two of the funniest films at TIFF were, of all things, elegies. Like the doppelgänger duo of The Double and Enemy and the misdirected-revenge double-bill of Bastards and Prisoners, Raya Martin and Mark Peranson's La última película and Sion Sono's Why Don't You Play In Hell? seemed to be sharing a direct line, commiserating over the demise of celluloid while huddled together in an abandoned cinema, bracing for the digital apocalypse in mock terror. Tonal and thematic overlaps aside, however, the films diverge in their cases for the relative importance of filmmakers at this moment of crisis. La última película directs its satirical energies towards Alex Ross Perry's self-satisfied hero, a director on a mission. Sono's by turns delirious and sentimental film goes the other way, all but deifying its energetic schlockmeister, who prays to the Movie God as a teen that he might one day make something worthy of 35 mm and finds his prayers answered ten years later, when a pair of warring yakuza clans commission him to turn their grand battle into a cinematic time capsule, to be screened at the homecoming for one of the mobster's jailed wives.

Sono's conviction in delivering that lunatic premise with a straight face is as impressive as his eye for high kitsch, never finer than in his astonishing image of a bare-footed child sliding across a blood-splashed floor to the gangster on the other end, who's then rendered captive to her performance of a toothpaste commercial jingle and its accompanying dance, right out of the Michigan J. Frog playbook. Sono is so pleased with his set-piece--who wouldn't be?--that he goes on to replay it a half-dozen more times, justifying its repetition on account of the now-lovestruck gangster's fixation on finding the girl--the daughter of his rival--as an adult. That's a fine excuse, but it doesn't extend to the overall air of self-enchantment that hangs over the project, which too often rewards us for sharing its concerns about the closure of local movie theatres, the lost art of projection, and the limitations of digital--all easy identification points for cinephiles who like to see movies that make them feel understood. As a savvy genre farce, though, this is as about as good as it gets, a bloody but ultimately sweet little essay on how history repeats itself first as tragedy, then as someone's shoddy crime thriller.