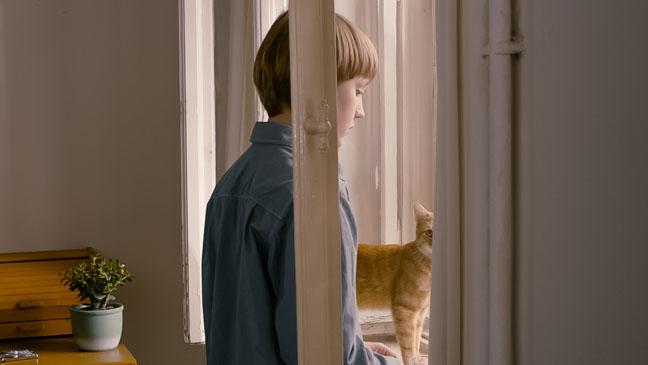 by Angelo Muredda In his essay on the origins of the uncanny, Freud looks into German etymology to find that heimlich is one of those words that means a given thing as well as its opposite--that which is, on the one hand, familiar, and also that which is kept out of sight. The unheimlich, or uncanny, is by that token always latent within the ordinary--it's the thing that should have stayed hidden away but has instead come to light. People in Ramon Zürcher's marvellous debut are always calling the familiar things around them uncanny, and no wonder, given the alien eye with which Zürcher observes them. Set in a bustling Berlin apartment that houses a reserved matriarch, her visiting twentysomething children, her adolescent daughter, her ailing mother, and a pair of pets (including the ever-roving orange tabby that supplies the title), The Strange Little Cat has the ingredients of a multi-generational melodrama about a family coming together and splitting apart in an uneasily-shared space--an August: Osage County for the arthouse set. But Zürcher happily forgoes such narrative dead ends in pursuit of something more playful and unsettled, working with the weird formal properties of the objects that fill this domestic space, from a child's misspelled grocery list to a glass bottle that spins around a bowl in the sink as if propelled by its own volition.

Zürcher's debut has been compared to the films of Jacques Tati, and certainly the sound design, which elliptically connects the piercing scream of a child with the whir of a remote-control helicopter and the hiss of a squirting sausage, puts us in mind of the industrial whooshes of Play Time. Here, though, the joy of finding domestic things strange is never far from something more troubling. If the inscrutability of cats is one of the operating motifs--you could convincingly make the case that the director's authorial surrogate is the orange tabby who sees all from his precarious vantage point--the other major one is surely the pressurized nature of the family unit. While many of the compositions are one-shots, little tableaus of individual family members or animals going about their unusual rituals in barely-contained isolation, there's always the sense of something boiling up to a critical state just outside the frame, a natural consequence of having this many bodies jammed into this small a space. You could call The Strange Little Cat a brilliant metaphor for the family as pressure cooker, then, but its genius might lie in the equal attention it pays to the literal side of the conceit--the image, for instance, of a pressurized bottle about to lose its cap, one of several remarkable instances of an everyday object made beautiful and menacing.