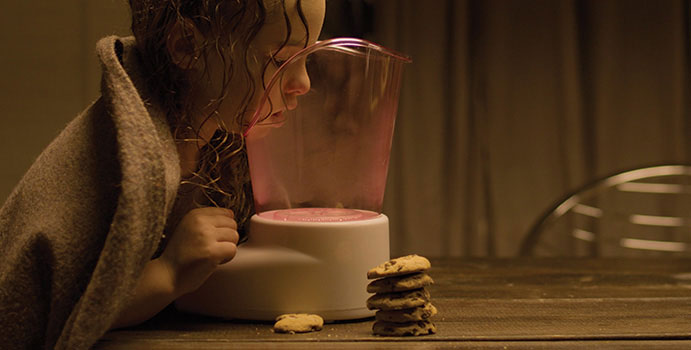 by Bill Chambers Unfortunately for Candy, a non-judgmental, veritable time-lapse look at one night in the life of a prostitute that occasionally branches out to linger with her spent, oddball clientele, "Breaking Bad" got there first with an indelible montage set to The Association's "Windy" that opened season three's "Half Measures." Kudos to director Cassandra Cronenberg, however, for not making a straight-up horror and risking the same comparisons to her father that plagued brother Brandon's Antiviral.

Der Untermensch is an interpretive dance piece choreographed by and featuring the lithe Simon Vermeulen. I confess I didn't even attempt to unpack images like the block of ice with a foot at its centre resting against a rusty bucket, instead consulting the TIFF site, which reveals that the piece is based on the Third Reich's persecution of homosexuals. If I have a problem with the film, though, it's not its obscurity but rather an abundance of close-ups that combine with choppy editing to betray a lack of confidence in the ability of Vermeulen's sinewy form to hold our attention. In a way, In Guns We Trust has the opposite problem of placing too much faith in the power of repetitious still photos to keep us hanging on the words of unseen interviewees, although its documentary subject matter--Kennesaw, Georgia, where gun ownership is mandatory--is, in and of itself, both compelling and monumentally depressing.

Speaking of depressing, Jimbo bills itself as a day-in-the-life of Jimmy Leung, who lists his various ailments as schizophrenia, OCD anxiety disorder, bipolar depression, and Asperger's syndrome. Jimbo dreams of one day boarding the same elevator as his idol Arnold Schwarzenegger so he can corner him with a movie pitch; in the meantime, he constantly badgers his friend Ryan, director of this short, with ideas for scripts, and herein Ryan attempts to extrapolate--in scenes at once idiotic and heartbreaking--The Running Man and T2 as they exist in Jimmy's head and volunteers to type up one of Jimmy's handwritten screenplays, which is like cracking the Enigma code. Though Ryan obviously sees Jimmy as a fascinating subject, I don't think he's condescending to him: they seem to have met as patients at the same hospital when Ryan himself was being treated for schizophrenia. He's just in a little better place now and throwing Jimmy a lifeline, and Jimbo valiantly if incidentally puts a non-threatening face on mental illness. But Jimmy is clearly stupefied, perhaps as much by pharmaceuticals as by a clusterfuck of faulty wiring, and he lives in government housing that, not unlike his imagination, hasn't been updated since the early-'90s. The realities the film presents are too great to ignore, and they make whatever optimism it musters look preposterous.

Method casts "Big Love"'s Shawn Doyle as an actor on a cop show struggling to remember his lines during an interrogation scene. That's a bit of a spoiler, regrettably; and like the honorary "SNL" sketch it is, Method doesn't quite stick the landing. Nevertheless, it's a substantial showcase for the oft-squandered Doyle, and slickly directed. A return to abstraction, Portrait as a Random Act of Violence may or may not depict an actual act of creation, but is mesmerizing and finally awe-inspiring all the same as an artist smashes a windowpane, then marionettes a sculpture out of the shards of glass.

The similarly spellbinding We Wanted More depicts a glamorous but lonely pop star on the eve of a world tour. About to go on stage at the beginning of the piece, she asks her manager, hopefully, if "he" showed up; the answer is "no." She's clearly a woman who's made personal sacrifices to get where she is, and when she literally pukes up a daughter, she withdraws from her professional responsibilities to spend the evening mothering the kid. Semiotically intriguing and dense with subtext, We Wanted More courses with dread before arriving at a startling ending bound to polarize viewers within and across gender lines. Christine Horne is amazing in the lead, while co-star Angela Asher is, somehow fittingly, the vocal twin of Mercedes McCambridge in The Exorcist.