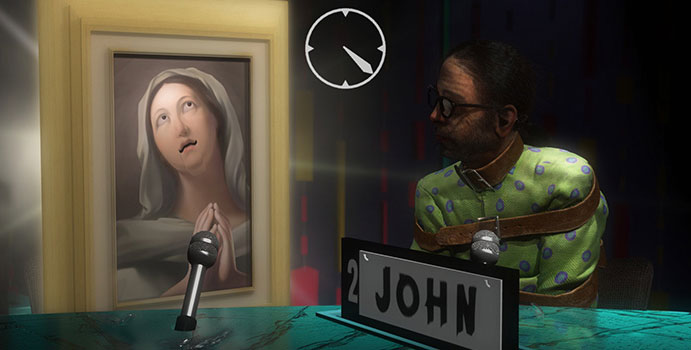 by Bill Chambers TIFF 13's Short Cuts Canada programme starts viewers off in the deep end with Cochemere, a bifurcated, CG-embellished mix of puppets and live-action in which a nude, polarized Mother Nature, presumably (Google tells me the title means "mother checkmark" in English), intrudes on a stormy utopia to nourish with milky saliva the uncanny fauna, who then appear to return the favour in outer space, their rapey, goblinlike presence prompting a shapely, flame-haired astronaut to start masturbating in her sleep. Sometimes enchanting--the opening images seem found, like the hidden universes of Microcosmos (and, hey, a little Barbarella kinkiness goes a long way)--but ultimately impenetrable. Perhaps all you need to know is that St. Thomas Aquinas is thanked in the credits.

The National Film Board of Canada's very National Film Board of Canada Gloria Victoria finds abstract, geometric shapes coagulating into politically-loaded silhouettes of raised fists, mushroom clouds, and oil derricks, to say nothing of the...football helmets? It's risible quasi-propaganda made rousing by the use of Russian composer Shostakovich on the soundtrack. Both Cochemere and Gloria Victoria are conceptually lucid next to Pilgrims: one of those short films with a running time half eaten up by opening credits, it proceeds to confusingly juxtapose hostilities between indigenous peoples and whites with a guy in a gimp outfit and much water imagery. I suspect Pilgrims breaks the cardinal rule of short films by being a covert trailer, although the feature in question has been truncated into pure and utter jabberwocky, like those infamous 'next on "Mad Men"' previews.

With a hit-and-miss crass sense of humour, Remember Me literalizes the fear of being forgotten in having its hero suffer the Charlie Kaufman-esque affliction of fading away, Marty McFly-style, when no one's thinking about him. He starts taking drastic measures to ensure he's always on someone's mind, even if that means making people hate him. (In an uproariously tasteless highlight, he sends photos of himself squandering food to an impoverished African village.) Truthfully, this is probably another stealth trailer, but at least it aims to demonstrate the viability of its (high) concept instead of putting two hours of story in a garbage compactor.

Directed by and starring Joel Coen doppelgänger Chris Landreth, Subconscious Password uses computer animation on still photos to give a "Max Headroom"-like finish to the simple story of a guy trying to recall the name of an old acquaintance who's approached him in a crowded club. Landreth depicts his alter ego's mnemonic struggle as a game of "Password" (Don McKellar voices the host) in which everyone from Dick Van Dyke to William S. Burroughs attempts to spell out "John" amid the Freudian interference of the subsconscious mind. Even at its most maddeningly eccentric, Subconscious Password's execution is identifiably, hilariously human; this is easily my favourite entry in the first program.

Lastly, in The Sparkling River, Chinese tourists descend on an alpaca farm, whose white proprietor speaks in a nerdy deadpan reminiscent of comedian Brian Posehn. There's a poetic moment where someone asks, "May I show you something?" and the other person replies, "Inside or outside?"--and it turns out she means inside or outside of his head. "A memory," he says, and the film cuts to a butterfly, presumably a telepathic projection. "It's nice," she offers. "It's meant to be sad," he retorts. "Oh, I see it now," she says. And that's the experience of watching The Sparkling River in a nutshell: I bet with some gentle prodding, I'd "see it now." I also bet it plays better in its intended 3-D.

I would suggest 'Cochemere' is a play on 'Cauchemar', the French word for 'nightmare'. Google Translate has its limitations.