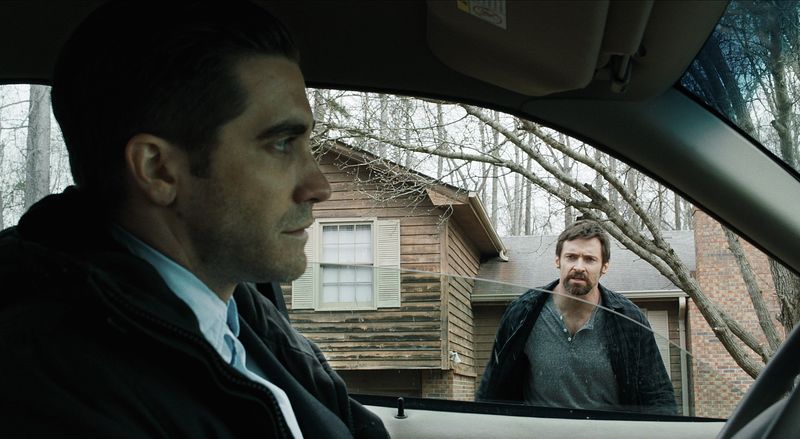 by Angelo Muredda Denis Villeneuve comes to America with Prisoners, an alternately strange and gripping but finally self-immolating crime picture that earns the right to its austere silver Warner Bros. logo before it devolves into a Scooby-Doo mystery for sadists. Last seen beckoned to the heavens by a pre-Oscar-anointed Anne Hathaway, Hugh Jackman plunges right back into the shit here as Keller Dover, a suburban dad and mild-mannered carpenter who goes berserk when his daughter and her friend (the child of perennially underused Viola Davis and Terrence Howard) vanish after Thanksgiving dinner. The first suspect is Alex (Paul Dano), a creepy, developmentally delayed young man who roams through the neighbourhood in his RV. Though he's arrested by crack detective Loki (nicely played by Jake Gyllenhaal, despite his character's name and distressingly shoddy police work) and released when the investigators find nothing to pin him on, Alex is promptly recaptured by a raging Dover, who turns out to have his own torture venue for this very occasion, complete with room enough for a black box whose construction will put Dover's woodworking skills to good use.

It's hard to say where exactly Prisoners goes wrong, though Dover's dubious reason for kidnapping Alex when Loki is in hot pursuit of a more credible suspect turns out to be an ominous hint of the irrational behaviour to come. Shot through grimy windows and near-constant rainfall, this is, thanks to Roger Deakins, surely the most beautifully-lensed and smartly-composed thriller to come down the pike since Zodiac; Deakins could easily get a co-director credit. The procedural terror of the early moments, as Loki sets about finding his man or woman before time runs out, is also strong stuff, not as precise as David Fincher's depiction of data-mining crime scenes, but about as absorbing.

Too bad, then, about Aaron Guzikowski's sloppy script, which loses track of key characters for long stretches--Loki seems to be breaking the fourth wall when he complains to his superior that he needs to know where everyone is, damnit--and throws out increasingly outlandish plot complications as it struggles to solve its own mystery, from a runaway gun to a casket full of snakes. Neither of these developments has anything to do with the torture alley Villeneuve initially walks us down, making the last act's hopeless attempts to circle back to the poor boy in the box and say something grand about cycles of abuse a little insulting. Although you could blame this insincere showboating on Guzikowski, the howlingly bad justification the real kidnapper gives for the grand scheme feels like vintage Villeneuve: a so-smart-it's-stupid reveal to match the twist that one and one might just might make one in Incendies, which ended in a po-faced rendition of "I Am My Own Grandpa."