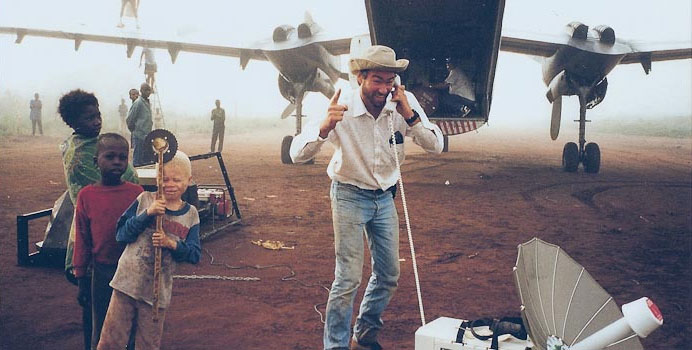 by Bill Chambers Too satisfied with being--and too short to be anything but--a hatchet job, Mission Congo is nevertheless a worthwhile reminder that televangelists are crooks, something that's all too easy to forget in this age of video-on-demand. (Out of sight, out of mind.) The film is a documentary account of the opportunism that sprang up around the Rwandan genocide, specifically "The 700 Club" host Pat Robertson's "Operation Blessing," which was ostensibly established to fly medical supplies, water, and, of course, missionaries to a bordertown refugee camp in crisis from a cholera outbreak. Initially, it seems like Robertson has merely sent people to proselytize, with no tangible aid forthcoming (except tons of discount Tylenol nobody needs), but an even more sinister truth emerges: Robertson has used Operation Blessing to gain entrance into Africa so he can start mining diamonds--which he's subsidizing with the viewer contributions flowing into "The 700 Club" in support of Operation Blessing. Worse still, Robertson's allies are the very architects of the genocide, with whom he hobnobs--either cluelessly or hubristically--in vainglorious footage taped for his program. The bug up the ass of co-directors Lara Zizic and David Turner, who freely admit to getting sidetracked from a larger portrait of disaster relief, is not just that Robertson got away with it, thanks to his considerable political clout as the leader of the religious right, but also that he erected another façade in the form of a little community for which the Operation Blessing website continues to request donations. Its residents never see a dime, and have lived in abject poverty ever since Robertson unceremoniously abandoned them. Though Mission Congo solidly demonstrates the Kuleshov effect in a droll cut from Robertson soliciting money for a good cause to a gaggle of diamonds, it's less a movie than a public service announcement. The most memorable segments feature grizzled fraud investigator Ole Anthony, who admits to a dwindling sense of schadenfreude towards people taken in by faith healers; more of this shading, please.