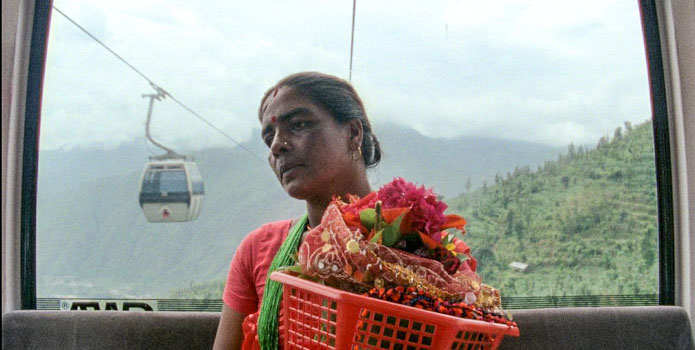 by Angelo Muredda The most spectacular sequence in Leviathan, the last major film to come out of Harvard's Sensory Ethnography Lab, captured a horrifying seagull raid from the perspective of the birds' prey, the camera appended to a boat and darting through the water alongside a school of anxious fish. MANAKAMANA, co-directed by the lab's recent graduates Stephanie Spray and Pacho Velez, doesn't quite have the money shot of its predecessor, but its very existence as a finished product feels like the fulfillment of a delicate magic trick. Forgoing the dozens of lightweight cameras that made Leviathan such a visceral experience, Spray and Velez fix their single camera on a cable car as it travels over the valleys of Trisuli in Nepal, carrying all manner of local pilgrims and tourists to the titular temple. We follow the car as it goes up and down over the valley eleven times, alternately watching the restless, contended, and excited passengers register every bump and dip of the trip and feeling swept along ourselves, thanks to a transparent glass window that overlooks the hills. (As Dennis Lim pointed out in the LA TIMES, each ride's duration of about twelve minutes neatly lines up with the length of a roll of 16mm film.)

It's a cliché, to be sure, but you've never seen anything like this, the sensory equivalent of just under a dozen prolonged, leisurely rides on a rollercoaster with drastically varied company, who sheepishly engage the camera as if they're in a modest photo shoot. The first twenty minutes or so are especially disorienting: we watch an older man and a boy sleepily ride out the trip while their car zips past another one of about equal size, which rapidly swells in proportion from its initial appearance as a faraway dot as it approaches. Our sudden revelation of the other car's size and speed feels like something out of the model-ship play in Star Wars, only in real space. As for the passengers, their expressions are nonplussed, unfazed by either the sublime natural environs over which they're suspended or the human-made technology that conveys them. Of course, as long as they face the camera instead of what's going on behind them, the passengers don't see what we do. MANAKAMANA may thus have a sly ulterior motive to re-enchant its own viewers to the kinds of strange beauty a person can see out of all sorts of windows, whether those of a cable car or a viewfinder.