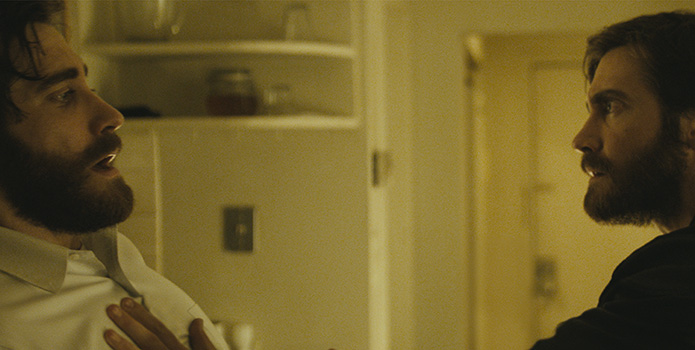 by Angelo Muredda If the interviews floating around online in the wake of his appearance at TIFF are any indication, Denis Villeneuve spent much of his time with press managing expectations about Enemy. Though it's technically his English-language debut, as well as the first of two collaborations with Jake Gyllenhaal in a year's time, Enemy isn't slated to come out until sometime next spring, long after its bigger-budgeted, higher-pedigreed younger sibling, Prisoners. Judging from its deferred release and Villeneuve's own comments that the film is an experimental project, a one-off to help him transition from the high-toned tragedy of Incendies to more classical Hollywood filmmaking, you'd think it was a dog, but in truth it's probably the best thing he's ever made--a modest little psycho-thriller based on José Saramago's novel The Double, set in a jaundiced Toronto no one would want to hold a festival in.

Gyllenhaal plays Adam Bell, a history professor who spends his nights in commitment-free rapture with Mélanie Laurent and his days dryly lecturing about Hegel, Marx, and cycles of repetition at the thinly-disguised Scarborough campus of the University of Toronto, which Villeneuve captures in all its brutalist concrete glory. That's until a casual video tip at the staff lounge inspires him to rent a zero-budget movie--where else, but at Queen Video?--featuring his exact double, a two-bit actor named Anthony (also Gyllenhaal) he finds tucked away in the background of one shot as a bellhop. Anthony, of course, has his own blonde partner (Sarah Gadon, whose near-classical vibe is expertly tapped), and it doesn't take long for all four parties to meet in perverse combinations that would make the characters in Cronenberg's Crash blush.

The doppelgängers admittedly don't respond to their big discovery the way a normal person might, taking nearly an hour to even raise the possibility that they might be family instead of something more sinister. But that's part of the brain-damaged charm of the film, which plays out like a bored thirtysomething's existentialist daydream about infidelity and other escapes, all unfolding under a smog cloud. Toronto's poisonous skies have never looked so menacing; nor have the strange glass monstrosities of Mississauga's condo towers, stalked in a surreal sequence by a giant CG spider. That this is a Telefilm-sponsored production made to showcase Canada is surely the greatest and most meta joke, but the big surprise is that there are jokes here at all. A humourless scold at his self-serious worst, Villeneuve seems to be having an awfully good time hovering between dark portent and unabashed silliness, playing around with the goofy signifiers of the Jakes' personality disorder(s) like a first-time filmmaker with talent to spare. He even calls in Isabella Rossellini as Adam's mother--doing a shade of her concerned matriarch from James Gray's Two Lovers--to blow our minds with the revelation that it's him, not his double, who likes blueberries. This is a surprisingly funny movie, then, the better to jolt us with the penultimate shot, more frightening and sublime than any of the hammer-wielding theatrics in Prisoners.