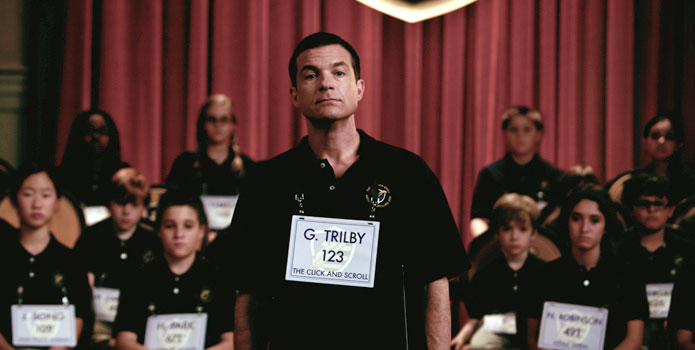 by Bill Chambers While the concept of an "open source" film franchise, one to which any Joe Schmo can contribute, is not a new one, it's more common in Europe and Asia, where intellectual property laws are considerably more relaxed. The homegrown "bad" series--much to Harvey Weinstein's chagrin, no doubt--has somehow transcended that, spinning off from Bad Santa's core desire to milk the shock value of giving an absolute cretin some measure of responsibility for the welfare of a beatific child. A mild disappointment at the time, Bad Santa looks more sophisticated through the prism of imitators Bad Teacher and now Jason Bateman's directorial debut, Bad Words: for one thing, the kid in it is a total weirdo, not just the personification of innocence waiting to be defiled; for another, when showcasing appalling behaviour, it remembers to be funny. Bateman also stars in Bad Words as ornery fortysomething Guy, an eighth-grade dropout who uses that fact as a loophole to enter a children's spelling bee and quickly advances to the nationals. Kathryn Hahn is outlandishly adorable as his involuntary sidekick, a reporter who becomes his Girl Friday and, in dissonant scenes that play like off-brand Apatow, fuck buddy. And sweet-faced Rohan Chand is Chaitanya, a lonely, bobbleheaded overachiever whose proposed corruption by Guy feels mostly tragic. Mischievousness is only so elastic, and Bateman's character--exempt from reproach as if he's Bugs Bunny (making superfluous his obligatory appeals to redemption)--repeatedly takes things too far, sabotaging his fellow contestants in ways that are evil and, it turns out, sociopathic. When he's not even thrown by words hand-picked to trip him up, like "floccinaucinihilipilification," it's clear that he doesn't face any legitimate competition from these kids. Why, then, knock a little girl out of the running by tricking her into thinking she's had her period on television? Giving the film an autumnal burnish that probably seemed mockingly scholastic but is instead antithetical to laughter, Bateman's formidable comic instincts really fail him here. Nice to see his old cohort from "The Hogan Family" Steve Witting in the role of the bee's proctor, though.