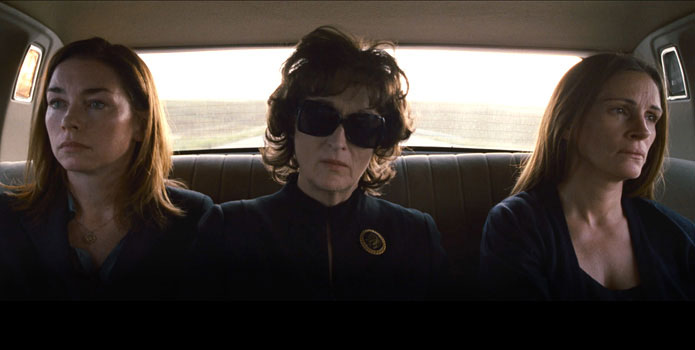 by Bill Chambers "Don't go all Carson McCullers on me!" a character admonishes in August: Osage County, John Wells's film version of Tracy Letts's Pulitzer-winning play. I think the line is meant to be ironic, because Letts, author of demented southern gothics like Bug and Killer Joe, is an obvious heir apparent to McCullers. In the context of this timid adaptation, however, it sounds like a studio note. August recently made headlines because the ending may change from what audiences saw at TIFF, and that would be for the better--I somehow doubt that reassuring viewers of Julia Roberts's indomitable spirit ever crossed Letts's mind as one of his goals for the piece--but it wouldn't be enough to take the Garry Marshall tang out of the film. Chewing scenery with her mouth open, Meryl Streep is Violet, the gargoyle matriarch of an Oklahoma dynasty, hooked on pills because of mouth cancer and, let's face it, in obeisance to a certain theatrical tradition. Violet's sister Mattie Fae (Margo Martindale) and daughters Barbara (Roberts), Ivy (Julianne Nicholson), and Karen (Juliette Lewis) have gathered together along with their own families to mourn the passing of Violet's husband and confront some awful truths laid bare by Violet's condition and drug-fuelled compulsion to spill secrets and push buttons. Casting like a kid in a candy store (what in God's name is Benedict Cumberbatch doing here--as the holy fool, no less) and shooting in a functional non-style that 'opens up' the play by going in for the kinds of close-ups you couldn't get without opera glasses, Wells is a producer-turned-director through and through. About his ability to marshal big egos there can be little doubt, but his camera bobs all over the axis of action like a first-year film student, and he shows almost no command of tone, reducing the material's vaguely satirical detours into perversion (incest! statutory rape!) to schematic twists both eye-rolling and curiously palatable. But it's finally the casting of 500-pound gorilla Roberts that kills this thing, throwing its centre of gravity so off-balance that August: Osage County feels not much different from a tailor-made ego trip like Something to Talk About, even before that contentious epilogue.