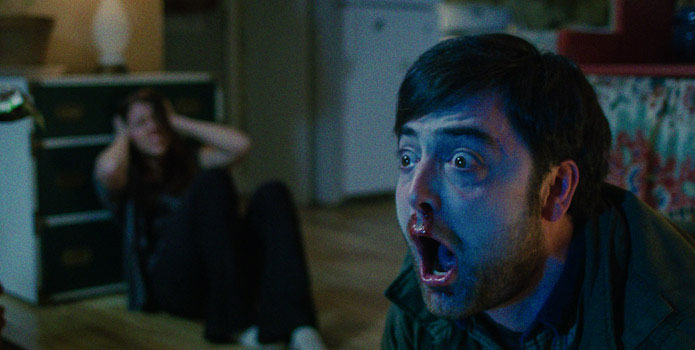 by Bill Chambers The picture's opening titles are in John Carpenter's familiar white-on-black Albertus font, and intercut with fragments of exposition like the intro to Prince of Darkness while some neo-Alan Howarth works the minor keys on a synthesizer. But as the makers of Almost Human have already given the game away in an endless, stilted prologue, what may sound like loving homage feels in context like a desperate play for credibility, a dog whistle meant to reassure the horror geeks they're in good hands. They're not. Set in the late-'80s, because nothing good's happened since then, the film is about an archetypal fat-guy/hot-girl couple (Josh Ethier and Vanessa Leigh) and third wheel Seth (Graham Skipper) getting torn asunder when the husband, Mark, is rudely abducted by aliens. Two years later, Seth remains shattered but Jen has settled down again with the poster boy for modern douchiness, one of those guys who shaves his beard into a thin strip along the jawline. So much for period detail; so much for Jen's taste in men improving. Anyway, Mark is returned to Earth, but not in the same placid condition--maybe the aliens broke him and this is nothing more than their version of tossing a toy out the window on a highway. As Mark begins a psychotic rampage that inches him ever closer to Jen, Seth's spidey sense starts tingling and he goes to warn her in one of many scenes that peg this for next-gen Ed Wood, because writer-director Joe Begos couldn't conceive of a more efficient, less torturous way to put Jen and Seth in a room together than to have him show up at her diner, politely ask the lady at the counter to retrieve her, then twiddle his thumbs (and ours) waiting for her to materialize. Some decent splatter--Mark uses a greatest-hits of horror implements against his victims--makes up the shortfall before going a bridge too far into tentacle rape and a recreation of the Irreversible head-bash but with a woman. I don't think the filmmakers are world-class misogynists or anything, I just think they're kind of stupid. Be sure to stay through the closing credits for a tag--not that it's worth it, but I was the only one at my screening who did, and misery loves company.